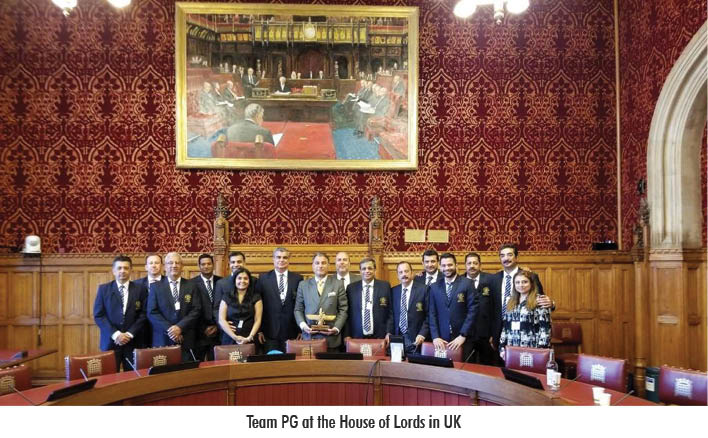 The All-Zoroastrian Parsee Gymkhana Cricket Team has always exemplified the true spirit of this great game; having always accepted all challenges thrown at them and this time, savouring the experience and journey along the way to London, United Kingdom. It is been an absolute honour for Parsi Times Special Sports Correspondent, Binaisha M. Surti, to have been a part of the winning Parsee Gymkhana team at the Oval, London, as she brings you exclusive highlights of the Team PG’s victorious UK Tour in August, 2019, where our fabulous team of Bawajis created history by winning the prestigious third edition of ‘The 1886 Trophy’. 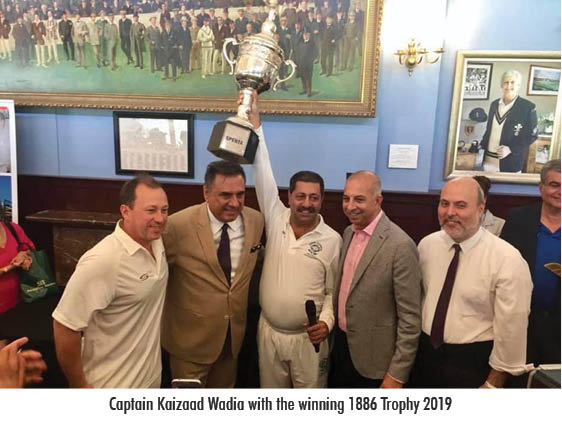 The comparative experience of the original 1886 tour between the English and the Parsis was simply outstanding, in keeping with the fact that our Parsi team had never played international cricket, while England had played seven series against Australia by the time they had arrived in 1886! After a three-week sea voyage, the Parsi team played their first match of the tour at Sheffield, against the Earl of Sheffield’s X1. The only contest which the Parsis won was against Normanhurst in the 1-Day, limited-overs fixture.

To recreate the golden moments, celebrate and remember this historic venture of the year 1886, Khodadad Yazdegardi, the dynamic Vice President and Cricket Secretary of Parsee Gymkhana, collaborated with English businessman and cricket enthusiast, Matt Greenwell to resurrect the nostalgic ‘The 1886 Trophy’ – extremely popular amongst the cricketing fraternity. The first edition of this tournament was won by the Parsis in India, while the second edition was won by Surrey County Cricket Club’s Charles Alcock X1. 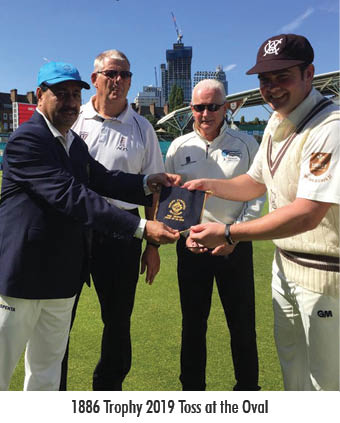 Coming back to the present and recreating memories, 133 years later, the Parsee Gymkhana Cricket Team (PG) comprising only Zoroastrians toured United Kingdom from 18th– 28th August, 2019. Founder and CEO of Red Tours, Zarir Shroff, was associated as the hospitality partner for PG’s 1886 Trophy tour to the UK.

The historic tour kicked off with PG playing Chiswick Cricket Club, where the latter won the contest. Rony Iranpur, captained the PG team. Founded in the year 1853, Chiswick CC is a historic place with a vision for the future.

20th August, 2019, saw Team PG visiting the House of Lords, where the extremely graceful and humble Lord Karan Bilimoria (Crossbench member of the House of Lords and Chancellor of the University of Birmingham) himself shared its mesmerising history and even took the team to his chamber. The House of Lords, also known as the House of Peers is the upper house of the Parliament of the United Kingdom. Khodadad Yazdegardi presented him with a meaningful memento – the Parsee Gym tie, cap and flag.

The next day, Team PG played another match where they faced White Hunters X1 in Lurgashall, Sussex. Lurgashall is a picture-perfect English village, with temperatures dipping as the day progresses. Cricket enthusiasts flocked by to not only see the match but also catch a glimpse of the 1886 Trophy which was on display outside the dressing rooms in Sussex. PG also visited St. Laurence’s Church in Lurgashall, which is over 1,200 years old.

The coin used for the toss by the White Hunters skipper, Roger Morgan-Grenville, and PG Captain, Fredun De Vitre, was a 100-year-old coin, dated back to 1919 from the reign of George the Fifth! The winning Team PG eventually got to keep this coin, which indeed is a prized possession now brought back to India. When the White Hunters tour Mumbai next, the same coin will be used for the toss.

Batting first, team PG notched up 162-8, thanks to brilliant batting from Kersi Pavri and Rustom Shethna. For the hunters, James was the pick of the bowlers snapping up two wickets. In reply, despite the White Hunters putting in great effort, they were bowled out for 145, handing PG a win by 17 runs. Farshid Cooper bowled brilliantly, picking three wickets. It was indeed a great privilege for Parsis to play at the historic venue of Sussex, as the first match of the original tour of 1886 was played at this venue. Come 2019, PG were back again but this time around they converted their previous loss into a victory at the ground.

Post the match, Robert Whitcombe playing for the Hunters shared an interesting anecdote with Parsi Times. “My father, Philip, played for Middlesex County in 1948 V/s Australia, at the Lords Cricket Ground. He was the bowler who picked up Don Bradman’s wicket on seven – the last living person to get Bradman out!” 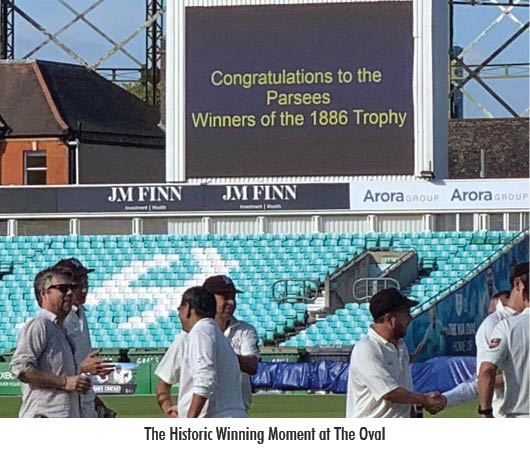 To celebrate Khordad Sal, Malcolm Deboo, President of the Zoroastrian Trust Funds of Europe (ZTFE), hosted the PG contingent along with Bollywood actor, Boman Irani and members of the Charles Alcock team for a pre-match dinner. This grand function was attended by over 350 Zoroastrians, including the Worshipful Mayor of Harrow Cllr Nitin Parekh, former Mayor Cllr Rekha Shah, Navin Shah AM from Brent and Harrow, noted Asian Journalist CB Patel, Sonoo Malkani and others of Harrow interfaith, members of Her Majesty’s Armed Forces and Ron Kalifa – OBE (Vice Chairman of WorldPay and English Cricket Board Member). Boman Irani enthralled the audience with his wonderful singing.

Speaking to PT on the occasion, the Mayor of Harrow Cllr Nitin Parekh, said “It is a pleasure to meet the PG team in UK. It is great to see history repeating and the tradition continuing with this great cricketing venture.”

Finally, the most awaited day of the tour arrived – 23rd August, 2019, the day which will be etched in all our minds when Parsee Gymkhana created history at the iconic Oval, London, by a massive triumph of 68 runs against Surrey County Cricket Club’s Charles Alcock X1. The Alcocks were named after the then Surrey County Cricket Club’s Secretary ‘Charles Alcock’ who organised the original tour of the Parsis back in 1886. Before start of play, the players had a warm-up and practice session at the KBC Indoor nets (Oval). The official welcome followed as the match day briefing. Team pictures were taken at the historical Kia Oval. 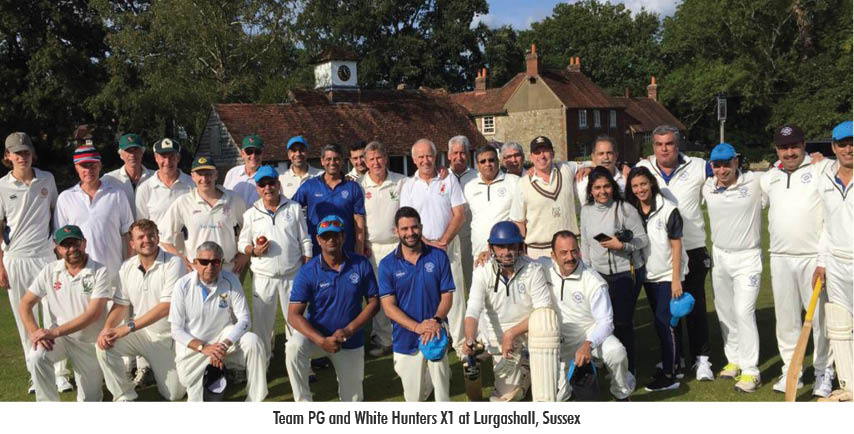 On this bright sunny morning at the Oval, along with Ron Kalifa, Boman Irani, Malcolm Deboo and Matt Greenwell, over 350 Parsis graced the occasion to witness, cheer and be part of this grand historic tournament. PG won the toss and elected to bat first. The top three batsmen- Shahen Mistry (36*), skipper Kaizaad Wadia (37*) and Reshad Dotivala (38*) put up a great show and remained retired, not out. Kersi Pavri struck some mighty blows, smashing a quick-fire 23 off 12 deliveries, but it was Rustom Shethna who took the bowlers to the cleaners with his 36 in 22 balls, which included three sixes! Team PG notched up 203-2 at the end of their 20 overs. For Charles Alcock, Lane picked (2-33) in four overs. Skipper Kaizaad Wadia has now remained unbeaten on all three occasions of the 1886 Trophy. During the first edition he made 43* followed by an unbeaten half century and now a great 38 not out. 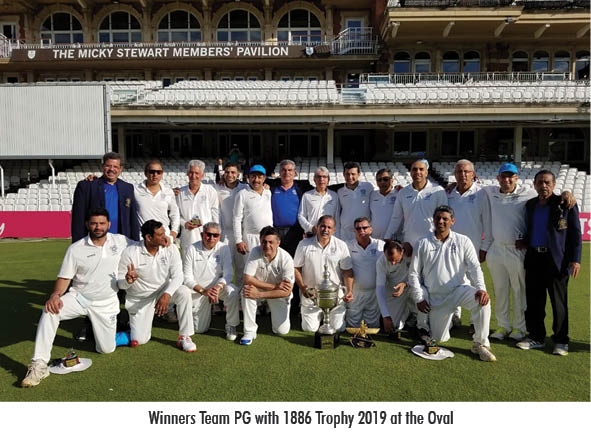 In reply, when the Alcocks came to chase the total, PG were on top of their game with their strategy and execution going as per plan. The batsmen were made to earn each run. Opening batsman Taylor top-scored with an unbeaten 38. Murphy was the first to depart when skipper Wadia ran him out for a duck. Walker walked back to the pavilion next, as Freddy Sidhwa bowled him at just 4 runs. Reshad Dotivala bowled Armstrong. Shahen Mistry snared three big wickets at a fabulous 3-23 in his four overs. Losing bulk wickets in quick succession, Alcocks were losing their grip on the game, even as Team PG cruised to victory in style! Soli Karanjia picked the seventh wicket of Simon – LBW – on 20. They finished with 135-7 in 20 overs. Team PG’s fielding spectacular, with 77-year-old Freddy Sidhwa from Dubai deserving a most special mention, for taking a phenomenal low-catch, proving his excellent agility on the field.

The umpires for the day – Graham Cooper and Phil Matthews, from Surrey – did a great job through the match. The post-match presentation ceremony was held in the Long Room of the Oval where both teams were felicitated with mementos and skipper Kaizaad Wadia lifted the prestigious 1886 Trophy. Celebrations followed with great food at the Oval Long Room. Sponsors SPF Private Finance and the Zoroastrian Trust Funds of Europe were thanked for their support.

Speaking to Parsi Times, Ron Kalifa said, “The Parsi team did a brilliant job going past 200 in 20 overs and putting pressure on the opposition. This shows their strength as a team. Being at the Oval is wonderful and we’re all fortunate to be part of this great game. Us Parsis are a great community and have great values that we believe in. It’s all about team-work, strong work ethics and doing the best thing for others!”

Boman Irani added, “Being at the Oval is not only about cricket, it’s about the rich history, tradition and two countries coming together. It has so much to do with the beautiful community we belong to. It’s great to see Parsis coming here to show their support. Freddy Sidhwa, the team’s oldest player, has been a huge inspiration – it motivates us to be strong and have a never say die spirit!”

“We are extremely delighted that our Parsis won the match and we congratulate them. Team PG winning and taking the trophy back to India makes us very proud! It was wonderful hosting everyone and Boman Irani brought the house down with his singing! We, being the oldest Anjuman in the West since 1861, were here when the original tour took place in 1886 and are here now too, when Parsis have created history. Keep it up Team PG! We hope to see you soon in London!” said Malcom Deboo.

With a few days on hand post the match, Team PG visited Buckingham Palace and witnessed the Change of Guards ceremony, as also the Westminster Abbey, London Eye, River Thames, London Tower, Marble Arch and also visited the Fortnum and Mason London, which is by appointment to HM Queen Elizabeth II Grocers and Provision Merchants. PG had a memorable team dinner night in Chelsea, thanks to Freddy Sidhwa.

A thrilled Captain of the winning PG team, Kaizaad Wadia, told Parsi Times “It has always been a great experience to lead the PG team. A captain is made by his team. I am elated that all played with high intensity – it was complete team effort!”

Finally, the man of the moment, Khodadad Yazdegardi, who conceived and made this entire historic event a raging success, concluded with “It’s a dream come true for us all in 2019 to play in the UK – I’m sure it will continue for decades to come. A big thank you to my President, Mehli Golvala, Managing Committee, Cricket Committee, Freddy Sidhwa, Aspan Cooper, Mr. and Mrs. Farshid Cooper, Boman Irani, Fredun De Vitre, Zarir Shroff, Lord Karan, Ron Kalifa, Malcolm Deboo and Binaisha Surti, who travelled with the team and covered the complete tour! A special thank you also to Parsi Times and Editor Anahita Subedar for covering PG Cricket for over four years now. The crowd at the Oval was the biggest motivation for the team and the victory is theirs. Everybody at PG is proud of this achievement as it has brought great laurels to our community and country!”