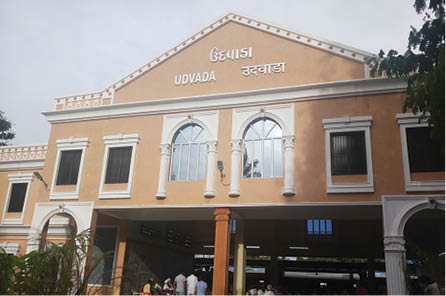 The newly revamped Udvada Station was formally inaugurated on 7th September, 2019, [Mah: Farvardin – Roj: Ram Y.Z. 1389], with the felicitation ceremony of Vada Dastoorji of Iranshah Atash Behram, Khurshed Kekobad Dastoor, for his efforts and personal attention towards the restoration of our most holy station as also his endeavours for the welfare of Udvada village.

Now reckoned as the most beautiful station of South Gujarat, Udvada Railway Station is equipped with the latest technology and the modern facilities to ease the journey and promote safety for commuters. 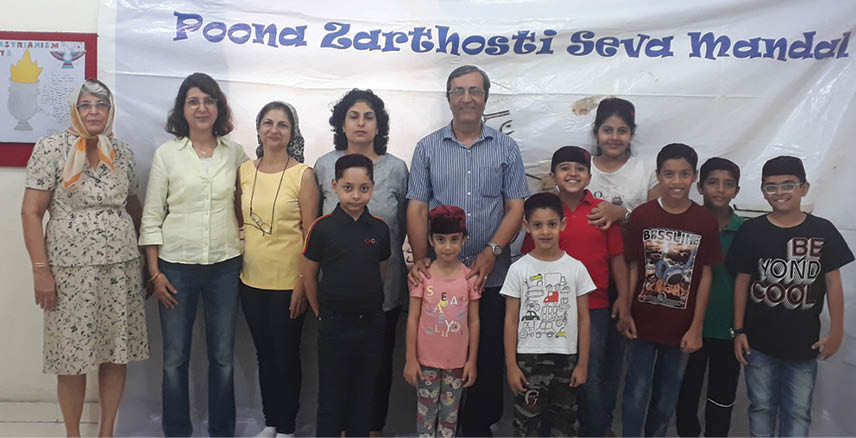 Speaking on the occasion, Vada Dastoorji Dastoor announced that he would also be putting in an appeal to request Railway Minister Piyush Goyal to start announcements for the halting of the Flying Ranee and another train, for the convenience of commuters. He requested that everyone take good care of this beautifully revamped property, with a special emphasis on keeping the surroundings clean to further empower the ‘Swachh Bharat Mission’, the dream of India’s PM, Narendra Modi.

The inauguration programme started with ‘Maa Saraswati Vani’ by students of Bhagini Samaj School, after which speeches were given by dignitaries. Er. Zarir Dastoor also graced the occasion alongside other Parsi residents of Udvada Gam, with Gram Panchayat and District and Taluka Gram Presidents, as also members of the Udwada Anjuman, Lions Club, WE Club, Senior Citizens Club, Bhakti and Shakti Mandal, Vyapari Mandal amongst others. All applauded Vada Dastoorji Khurshed Dastoor for the much-needed restoration work.

Speaking to Parsi Times, Vada Dastruji of Iranshah Udvada, Khurshed Dastoor, said, “I am truly delighted with the new construction and facilities which will benefit all, but especially our Zarthostis who frequently come to Udvada to pay their respects to the most holy, Pak Iranshah. I wish to extend sincere gratitude to our dynamic current Railway Minister, Shri Piyush Goyal, as well as to the esteemed ex-Railway Minister, Shri Suresh Prabhu, for their whole-hearted support and initiative in ensuring the timely completion and excellent implementation of the entire project.”

The special day ended with the rendition of the National Athem, as all attendees marvelled at the revamped station with excellent air-conditioned rooms and more. The occasion concluded with distribution of sweets and chocolates to all present.

In addition to the rehauling of the station, commuters have also voiced the need for a couple of trains to halt at Udvada station. “I have received numerous requests from our Community members asking if a couple of trains, especially the Flying Rani, could be made to halt at Udvada station, for the convenience of travellers. I will be putting in a request for the same to Shri Piyush Goyal and look forward to his continued support and assistance in the matter,” said Vada Dasturji Khurshed Dastoor.

As covered earlier by Parsi Times, the rehauling of the 123-year-old, Udvada Railway station has been ongoing for two years, earning it the elevated status of a ‘Pilgrimage Destination Station’. The project, which cost Rs 3.2 crores, was undertaken to safeguard the safety of commuters, after the tragic accident of Navsari’s Aspi Sepoy, who lost both his legs to an accident at the station, in September 2017. With a daily footfall of over 2,350 commuters, the new station has been bestowed a new air-conditioned Waiting Hall, a VIP Room, overhauled Ladies and Gents washrooms, a new Reservation-cum-Booking Office; restoration of old seating arrangements and Water Booths; new Toilet Blocks for gents, ladies as well as the differently-abled; and the wall of the assembly area designed with murals, while floral designs on the ceiling. Most importantly, Platform No. 1 has now been extended to accommodate 24-coach trains for the easy entry and exit of commuters. A boundary wall has also been erected along the Platform and along the circulating area for security purposes, especially for senior citizens.