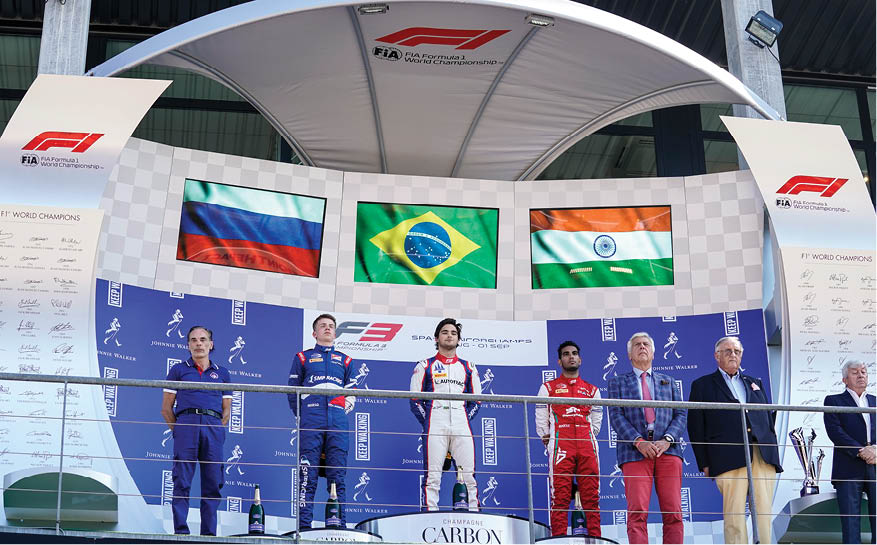 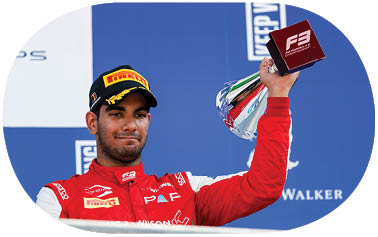 Jehan Daruvala earned his sixth podium of the season at Spa, Belgium, moving up into a clear second position, in the FIA Formula 3 championship in Round 6. Jehan’s sensational pole position earlier, his first in the series, is a support event to the Formula 1 Belgian Grand Prix.

Jehan started well from pole and managed to exit the first corner ahead. However, Pedro Piquet, son of 3-time World F1 champion – Nelson Piquet, took advantage of Jehan’s slip stream to overtake him after Eau Rouge. Thereafter, Jehan continued to lose ground and fell all the way to fourth. But he pushed hard and was able to slowly one by one, move back into second place, behind Piquet. Unfortunately for Jehan, a Virtual Safety Car was declared and the timing of the call affected Jehan, causing him to lose 4 seconds.

Later, Jehan’s Prema teammate, Robert Shwartzman managed to use his DRS (Drag Reduction System) to drive right around Jehan, who had to settle for third place, behind Shwartzman, while Piquet bagged his maiden win in the FIA F3 championship.

Race 2 had Jehan starting sixth and quickly moving up into fourth but had to lift off to avoid a collision, which allowed another racer to overtake. Jehan then got back one position to finish fifth. New Zealand’s Marcus Armstrong won the race. “On the first lap of Race 1, I bottomed quite a lot through Eau Rouge so Piquet flew by me before Les Combes. I was pretty confident I could stay with him, but the Virtual Safety Car came out at the last chicane and I lost a lot of time. I knew that the guys behind me were going to have DRS and it was going to be tricky. Third is not ideal, but it’s not bad! Race 2, we all raced for Anthoine. It was certainly difficult for everyone and my thoughts are with his family,” said a subdued Jehan, at the end of the weekend, marred by the tragic loss of Anthoine Hubert, in a catastrophic Formula 2 accident last Saturday.

Jehan moves up from third to second in the championship standings with 2 rounds remaining. He races next weekend in Italy, along with the Italian Grand Prix weekend.

Earlier Jehan bagged a sensational pole position at the famed Spa Francorchamps, circuit, in the FIA F3 Championship, part of the Belgian F1 Grand Prix weekend. Crucially for him, it added four points to his tally, as he chased Russian Robert Schwartzman and Juri Vips from Estonia, in the championship battle. “Finally pole position! I have been thereabouts all season, fighting for pole, and then I got it so I’m very happy for myself and the team. It’s great to bounce back after a bad weekend at Budapest. To be on pole at Spa is amazing, hopefully, I can turn it into a win,” Jehan had said.

And did he ever, as he moved up to second place in Round 6!