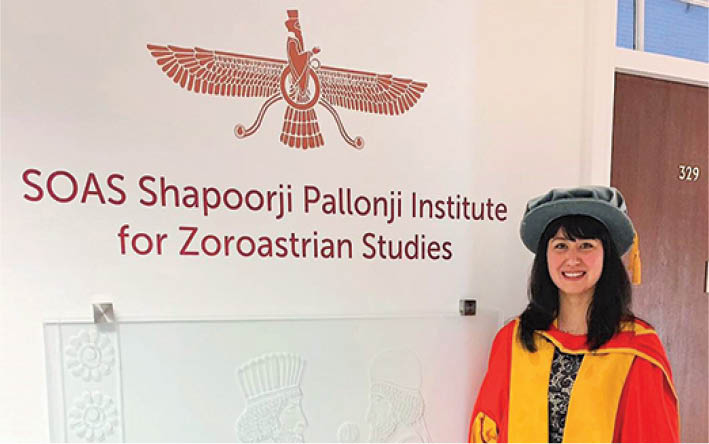 On 24th July, 2019, Nazneen Engineer was conferred with a PhD from SOAS (School of Oriental and African Studies, London), as a “Postdoctoral Researcher at the SOAS Shapoorji Pallonji Institute of Zoroastrian Studies.” Her interest in Zoroastrian Studies grew after she attended the December 2007 World Zoroastrian Youth Congress in Australia, inspiring her to pursue a Masters followed by her Doctorate in Historical Socio-Cultural issues of contemporary relevance.

For her doctorate, Dr. Nazneen produced an annotated translation of a Parsi-Gujarati text written in 1883, by a prominent high-priest of the Parsi Zoroastrian community. This formed part of her research into the wider issues of conversion and intermarriage surrounding the Mazagon Navjotes that took place in Bombay in the nineteenth century.  After her PhD, Nazneen returned to India where she worked for an NGO catering to disabled adults and abandoned/orphaned children. Through this period, she was involved the organisation’s ‘Roots’ program, where people, who had been adopted as children returned to India in search of their origins. This ignited her interest in the theories and concepts of identity; she is currently working on a research project assessing pathways to ethnic and religious identity for the offspring of mixed marriage, specifically, between a Parsi Zoroastrian and non-Parsi, non-Zoroastrian parents.

Speaking to Parsi Times, Dr. Nazneen said, “I am very grateful for the endless love and support of my parents, Becky and Rumi Engineer, the Zoroastrian Trust Funds of Europe for sponsoring my doctoral research, and my academic advisor, Dr. Sarah Stewart, for her guidance and patience over the years.”

Having lived in 5 countries (and visited many more), she considers herself a ‘world citizen’. As a Parsi, she has a soft spot for a joyful evening spent in the company of family, friends, pets, music, food, and wine. She enjoys a variety of things during her leisure time, including vintage clothes shopping, supporting Tottenham Hotspur FC and running.