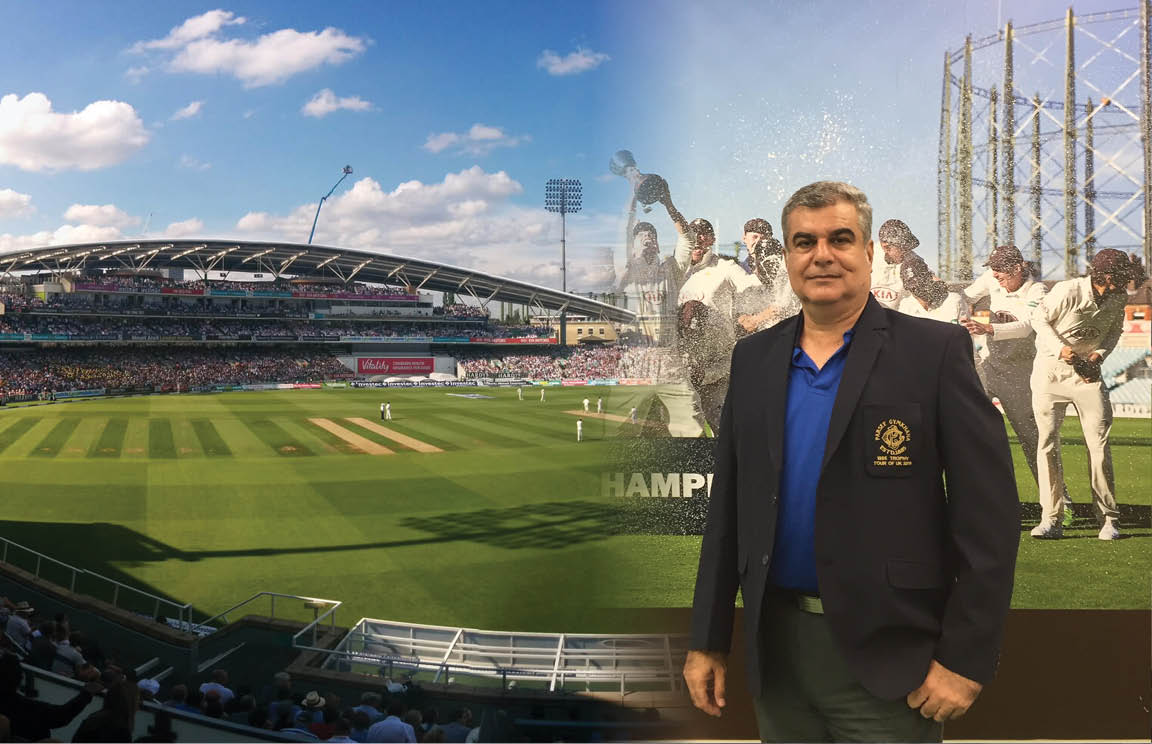 Parsee Gymkhana’s (PG) dynamic Vice President and Cricket Secretary, Khodadad Yazdegardi made the entire Parsi community proud, when he was elected as one of the nine Apex Council Members of the prestigious Mumbai Cricket Association (MCA), during its recently concluded elections, on 4th October, 2019.

A Technical Analyst in equities, commodities, currencies and derivatives as a professional, Khodadad does the gentleman’s game – cricket – proud, being a fine gentleman himself, one who leads by example, exuding inexhaustible enthusiasm, commitment, dedication and passion towards cricket. Being one of the central authorities and an eminent visionary in the Administrative department of PG Cricket since 2011, he has been instrumental in getting his club to win laurels and hit its prime during his tenure, with his creativity, implementation and love for the game of cricket. He is equally respected for the due attention paid to his players, always lending a patient ear and a helping hand to his players’ concerns and ideas and providing excellent solutions and strategies, which makes him truly stand out… all of which will prove even more valuable in his new innings at the MCA! Parsi Times congratulates Khodadad Yazdegardi on this joyous and honourable occasion with Sports Reporter, Binaisha M. Surti, catching up with him during PG’s Kanga League in Mumbai, where he shares his new vision and lots more, as the only Zoroastrian member of the Apex Council…

PT: How does it feel to be the only Parsi elected onto the Apex Council Members team? How did this come about?

Khodadad: I feel extremely proud and humbled about it. It all started when I moved a No-Confidence motion against the Mumbai selectors, as they were not watching enough local cricket matches. I am grateful to have received a tremendous response and support for the same. Around 89 members had attended and the motion was unanimously passed. Thereon, the stake holders, club owners and a number of the MCA staff insisted I stand for elections. Initially, I was hesitant, as I felt unsure about giving enough time to such a massive responsibility. But I decided to go for it and with overwhelming support, got elected onto the Apex Council. It was especially more humbling and more cherishable, because I was up against 27 other able candidates, most of them seasoned MCA members, and despite that, they put their faith in me to elect me in my very first attempt!

PT: This being your maiden foray into the world of MCA administration, how do you feel about taking on the reigns of MCA from your current position at PG?

Khodadad: I have been VP of Parsee Gym since 2004 and the Cricket Secretary since 2011, so I have keenly imbibed the major and minor nuances of cricket from an administrative viewpoint. Moreover, since I’ve been a cricketer myself, my understanding of the game is immaculate. I’ve also been a Sub-Committee member at the Indoor Academy at BKC, so I know how things function there as well. The lack of transparency and neglect was unfortunate as the elected people were unable to deliver the desired results. I thought if I wanted to better and clean up the system, I had to get into the system. MCA is a huge association – in fact, one of the biggest amongst all of BCCI’s associate members. When I was repeatedly told that they needed me to get on the bandwagon for the sake of cricket – I finally decided to give it a shot and continue working towards betterment with honesty and diligence.

PT: What is the vision that you would like to bring to the MCA?

Khodadad: Cricket is a gentleman’s game and a gentleman never breaks his promises – so I will try to fulfil the promises I have made to people, hopefully, in the first year itself. You can rest assured that Women’s Club Cricket will kick off this season itself in Mumbai. Regarding the grounds, water facilities and mobile toilets will be constructed. Post season, we will work even harder at improving our grounds and wickets in the maidans. My vision also includes bringing transparency in MCA affairs and ticketing matters – like initiating a system to send passes to ex-cricketers, umpires and scorers. Most importantly, the focus will be towards upgrading cricketing facilities.

PT: The newly elected MCA Committee has a blend of young and experienced members – what new ideologies can we expect to see?

Khodadad: I’ve admired how Dr. Vijay Patil runs DY Patil Academy alongside ongoing tournaments. I’ve learnt much from him – his vision has great clarity. I’m fortunate that my first 3-year tenure will be under his leadership. He is a sports lover – especially cricket; he listens and takes everyone’s inputs and believes in taking decisions democratically and unanimously. That’s why I instantly resonated with him – as he too believes in the word ‘we’ and not ‘I’! Also, fellow Council member, Dr. Unmesh has been the past secretary on the cricket committee and Sanjay Naik is a close friend of mine. I’ve known VP – Amol Kale, Shahalam Shaikh and Nadim Memon since the time I took over cricket. We comprise a dynamic blend of people and I am sure that this team will deliver because everyone has fresh ideas – not just on the cricketing front, but even on the administration front. Together we will work towards raising MCA to its deserving position. I know the road ahead is not smooth but we are braced to face the challenges as we are equipped with a strong road map and great team spirit. I am a person who believes in the process. Rooting for overnight results is futile and temporary – but a process-driven vision always delivers a good end product.

Khodadad: I thank everyone and wish that you continue to send your good wishes and blessings my way – I will always remain the same Khodadad, and will continue working hard with honesty, leaving the rest to God!

Parsi Times wishes Khodadad and the entire Mumbai Cricket Association the very best as they begin their new tenure!