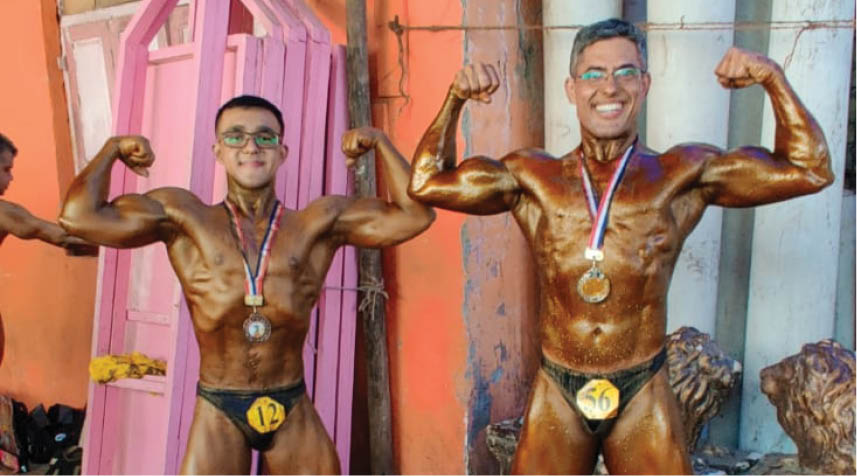 Father and son duo – 50-year-old Jehangir and 24-year-old Yohan Randeria – brought much pride to the community, having won the Silver and Bronze medals, respectively, in the Amateur Bodybuilder’s Association Of Brihan Mumbai’s ‘Mumbai Shree Bodybuilding Competition’, which was held on 24th November, 2019, at Samaj Mandir Hall, Kalachowki. Each year, the top three winners of this competition, in each category, qualify to compete at the Maharashtra State Level of the same association.

While Jehangir competed in the Shreeman Category (above 40 years), Yohan competed in the Uday category (First-timers), to return with handsome wins of medals in their respective categories – with Jehangir winning the Silver medal and Yohan – the Bronze medal. The father-son duo has now qualified to compete at the Maharashtra State level competition, which will be held early next year, and winners therefrom would compete at the national level.

A commerce graduate and erstwhile banker, Yohan realized his passion for body building, inspired by and in the footsteps of his father; he is currently pursuing a full time career in body building, having completed his professional training from the acclaimed K11 School of Fitness, headed by Kaizzad Capadia.

Jehangir Randeria is an entrepreneur in the automobile industry and the Founder of ‘Kamyo Car Spa’. He had also participated in the said competition last year, where having won the Bronze medal, he qualified for the State level competition, but unfortunately missed competing at the National level by a whisker, coming in at fourth place.

Speaking to Parsi Times, Jehangir Randeria said, “I took to the sport at a relatively later age – it all started when, at the age of 43, I was overweight and realized I needed to prioritize my health and get control of my weight. I started gymming and a healthy diet, with sheer discipline and dedication, and as I gained control of my health and body, soon it became a passion, which converted into competing!” For Jehangir, gymming is the most important part of his day and he works for nearly two hours daily, maintains a very conscientious diet and also spends good time on research to better himself.

“Our community is blessed with highly talented youth and though I see good number of participation and potential in our community sports events, I wish there was an increasing number of Zarthosti participants at the various other cosmopolitan events at the district, state and national levels as well. One just needs to stay the course and do one’s best – the results will always come to you, with perseverance, discipline and dedication!” concludes Jehangir, with a message for our community.