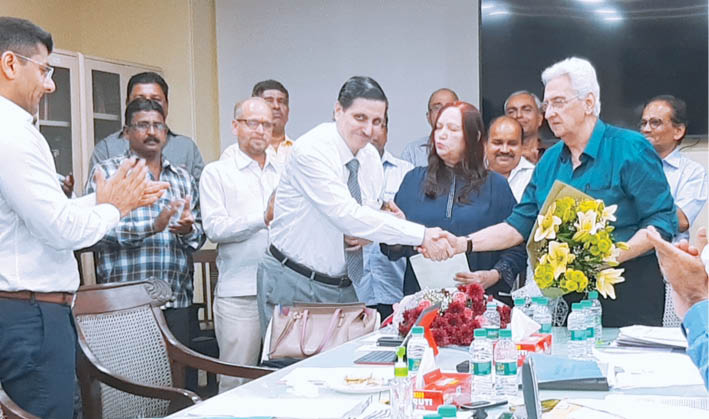 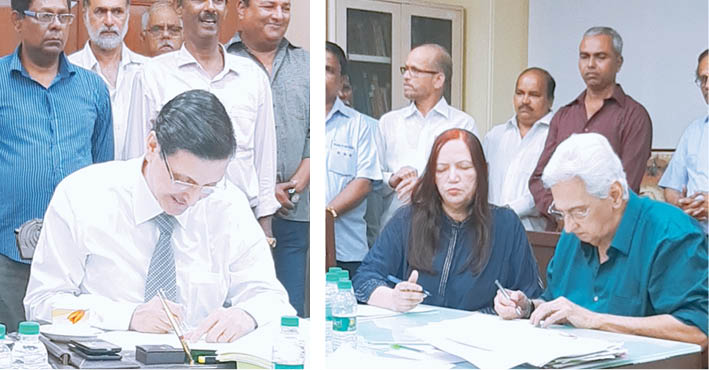 Overcoming what seemed to be a stalemate for a long period of time, on 19th November, 2019, the Bombay Parsi Punchayet (BPP) signed a new, 3-year Agreement with the Mumbai Mazdoor Sabha (MMS), for the welfare of the employees and workers of the Union. The Agreement was signed by BPP Chairman, Yazdi Desai and MMS President – Chandbibi Zaidi and MMS General Secretary, Dhunji Neterwala, in the presence of BPP Trustees Kersi Randeria, Xerxes Dastur, Armaity Tirandaz, Viraf Mehta, Union Representatives, a few Class IV employees and the press.

Though the tenure of the new Agreement is 36 months, since the old Agreement expired in December 2017, the BPP trustees and the Unions came to the settlement that the first 15 months from January were excluded from the purview of this agreement and for the same, an ex-gratia, lumpsum payment was made to the workers for these 15 months. The new Agreement comes into effect from 1st April 2019, and will end on 31st March 2022, effectively covering a period of 51 months, thus marking an exceptional new chapter in the history of the BPP.

Parsi Times was informed that despite months of meetings and negotiations between the BPP and the MMS, neither was able to come to an amicable settlement, with Dhunji Natarwala expressing that it was a near given, that an aggressive alternative would have to be considered to come to a settlement. However, according to both sides, it is mainly thanks to the intervention of Trustee Kersi Randeria and his negotiating skills, that both sides have finally reached a unanimous agreement.

The signing was followed by a round of felicitations as the agreements were exchanged between Yazdi Desai and Chandbibi Zaidi. Dhunji Naterwala thanked all present, including the committee members for the amicable settlement of the agreement, with a special mention for Trustee Randeria, saying, “The negotiations were tough. Let us work with trust now on. Had Kersi Randeria not intervened, things would take a different route.”

The understanding reached between the BPP and the MMS marks a history of sorts as leeway was accorded for the very first time by the MMS in not increasing allowances, alongside concessions given by the union on other issues. For the first time, not all increases/demands were catered to, as the MMS considered and accommodated the financial crisis of the BPP – and these good natured negotiations resulted in huge financial savings for the Trust.

Dhunji Naterwala stated that there was a need for greater clarity and smoothness in the channels of communication to ensure no scope of any misunderstandings in the future. He suggested that the BPP install a Sub-Committee dedicated to managing labor concerns for the speedy and peaceful resolution of any issues that could arise. He thanked the members of his Union, saying in good jest, “Abhi apke Masoor-pav khane ke din gaye, aur Pulav khane ke din aaye,” (translated: ‘Now, your days of eating Masoor-Pav are over, and days of eating Pulav are here!). He especially thanked Chairman Desai and Trustee Kersi Randeria who facilitated this negotiation. 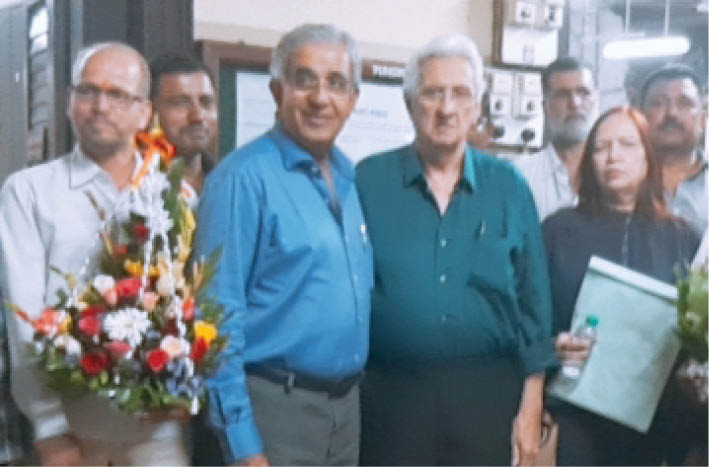 Needless to mention, this was not an easy settlement to reach. The paucity of funds had the Trust in a difficult spot, in keeping with what some of the Trustees believed, to be very high salaries of the workmen. It is to the credit of the Union and their leaders that they were able to strike a fair balance between their fight for the welfare of the workmen and their willingness to waive a few demands, which also was a first! The BPP and the MMS were thus able to come to an amicable settlement as they had the long-term and true interest of the workers at heart.

Speaking on the occasion, the man of the moment, Kersi Randeria, said, “This agreement was the culmination of team effort – it was made possible because we all came together. BPP has been facing financial challenges, but the Union leaders always had the welfare of their employees in mind. The delay was caused due to the situational challenges and circumstantial problems which needed time to resolve – for this, the BPP Trustees cannot be faulted. I think that it’s quite a big achievement for the Agreement to have taken place, despite the numerous hurdles – ‘Ke Masoor Pav nikal ke, Biryani laga diya!” He further agreed with Dhunji’s suggestion of a dedicated sub-committee to directly resolve labor issues.

Some of the BPP Trustees shared their responses with Parsi Times on the noteworthy occasion, as under:

“I would think it is a good settlement and I would give most of the credit to my colleague Trustee, Kersi Randeria for meticulously and diligently working out a formula that was satisfactory to both – the Union and the BPP. The BPP went through several rounds of negotiations and it was neither easy nor seemingly possible to strike the right balance, especially considering the financial position that BPP currently is in. However, with Ahura Mazda’s grace an amicable settlement has finally been signed and put smiles back on the faces of the anxious staff and evoked a sign of relief for the Board and for the Union.” – Trustee Noshir Dadrawala.
“The main person behind this (Agreement) is Kersi Randeria. Hats off to him! Because of him, the agreement period was extended to 5 years instead of the usual 3 years.”
– Trustee Zarir Bhathena.
“I’m pleased that we were able to resolve the pending labour agreement with the BPP Union to everyone’s satisfaction inspite of the financial issues currently faced by the BPP. We look forward to a harmonious and cordial relationship with the staff going forward.”
– Trustee Xerxes Dastur.

MMS President Chandbibi thanked the BPP Trustees for their corporation and was hopeful to work out more such cordial agreements in the future, as the evening concluded on a happy and positive note.