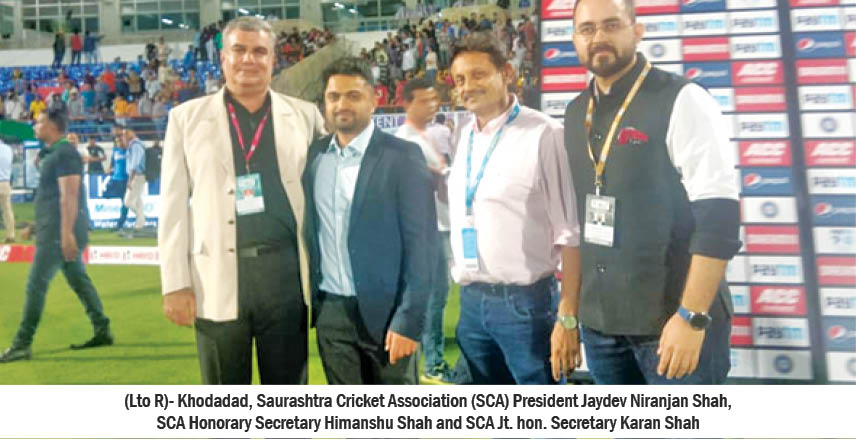 Khodadad Yazdegardi, who was recently elected as one of the nine Apex Council Members of the on the elite and prestigious Mumbai Cricket Association (MCA), has added yet another prized feather to his cap. He was recently appointed by The Board of Control for Cricket in India (BCCI) as the ‘Match Observer’ for the second T20 International match between India and Bangladesh which was played at the Saurashtra Cricket Association Stadium in Rajkot, on 7th November, 2019. India won this encounter by eight wickets.

Speaking to Parsi Times from Rajkot post the match, Khodadad said, “This is my first BCCI assignment and it’s been a great learning experience. I was in charge of the whole stadium including the pitch, training facility, media boxes, VIP area, hospitality boxes etc. I had to ensure smooth functioning of distribution of complimentary tickets as per Lodha Guidelines. I was also in charge of checking security arrangements. I was at the ground on the previous day for over four hours and returned at night due to heavy rains which flooded the grounds. The Rajkot groundsmen worked extremely hard till 2:30 am on the match day to ensure that we get an evening game on hand. On the match day too, I did an entire routine check of everything before the match started off. I had a great interaction with Jay Shah, Hon. Secretary, BCCI. He said that we should work closely to take our individual associations and BCCI forward which will help Indian Cricket to move forward on the right path.”

Also the Vice President and Cricket Secretary of Mumbai’s most prestigious Parsee Gymkhana, under Khodadad’s astute leadership and unwavering support, the PG cricket team has won several tournaments. Known to lead from the front, Khodadad ensures his players receive every motivation and backing. It is indeed a great privilege and matter of pride for the entire community to see a fellow Zoroastrian in the scheme of International Cricket once again. His great vision and insights into the game will surely create a positive impact on Indian cricket and cricketers.