One of our community’s most respected religious scholars, revered as the encyclopaedia on Zoroastrian religion and culture, Khojeste Mistree, recently held a four hour session with teenagers and adults in London, on ZTFE’s (Zoroastrian Trust Funds of Europe) repeat invitation, at the request of parents, keen on enlightening their children about our faith. 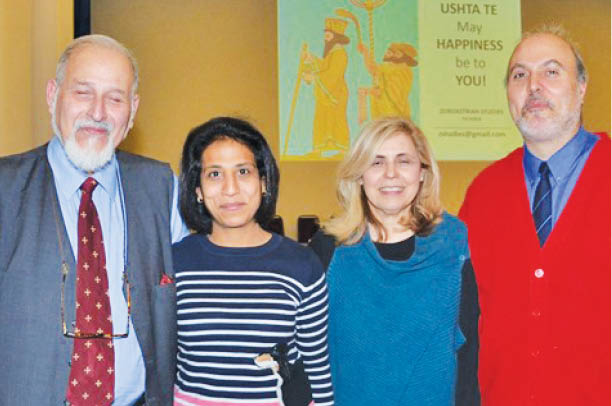 He shared his views on what it means to be a Zoroastrian, beyond the stereotypical tenets of Good Thoughts, Good Words and Good Deeds, with, “Surely our religion has more to offer,” singling out and decoding the idea of Happiness, as held in the Ashem Vohu prayer, as perhaps the most important part of Zarathushtra’s revelation. He spoke at length on the idea of cosmic dualism in a religion that has traversed time and survived. He discussed the making of the universe, answered on the finiteness of evil and the infiniteness of Zarathushtra’s message. He spoke of the existential relevance of evil, both as a force to confront in life and as an irrational and non-redemptive being, that attacks all that is good in the world.

His power-point presentation titled, ‘Civilizing the World and Safeguarding the Faith – The Legacy of Nine Zoroastrian Kings’, made it easy for viewers to get a good grasp about one of the oldest religions of all times. Using a collage of images, some never seen before by the community, Khojeste swept through the corridors of history, unravelling stories of some of our great kings and the measures they took to make our faith a unified and strong presence in the ancient world.

He spoke about the famous ‘Bill of Human Rights’ introduced by Cyrus the Great; the postal service instituted by Darius the Great; the Sasanian King Shapur, who captured the Eastern Roman Emperor Valerian, sending shock waves in the Roman world, as also other not so well known Zoroastrian Kings who protected the Iranian homelands, fighting Romans and the Byzantines for nearly 700 years, and their attempts to safeguard the Avesta. He narrated a moving story of the death of Yazdegird Shahriyar, the last Zoroastrian King.

He thanked President, Malcom Deboo and the Trustees and Managing Committee of ZTFE, as well as the Dastur and Jilla families for their support and interest. This occasion was in the pious memory of marhoom Framroze Naoroji Darukhanawalla, to whom piety and devotion to the faith was most important. On another morning, Khojeste also addressed Dr. Sarah Stewart’s group of graduate students at SOAS, on how an ‘insider’ immersed in the faith, views the religion and its practices.

The essence conveyed in Khojeste’s talk was not just a lesson in history, it served as a reminder that our kings have left us a legacy of heroic deeds and the responsibility of safeguarding the religion, which must be recalled, remembered and narrated by each generation to the next, so that it is never forgotten, for this is our inheritance and our enduring legacy.