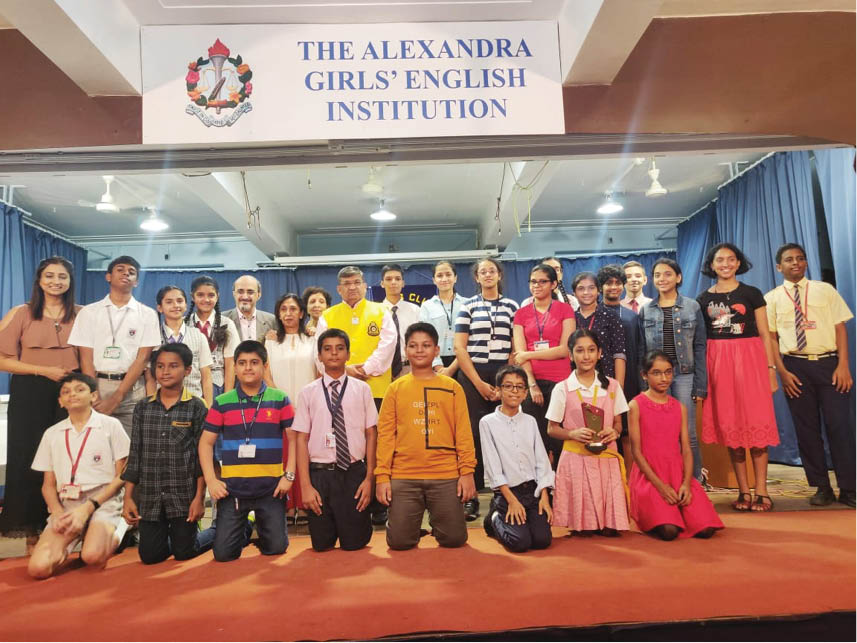 The Lions Club of Bombay (Host), along with the support of the XYZ Foundation and its spirted tots, celebrated Children’s Day on 23rd November, 2019 at the Alexandra Girls’ English Institution, with a unique event which showcased the artistic and literary skills of children aged between 11 to 13 years, as also felicitated achievers.

Club President, MJF Lion Zubin Billimoria called the meeting to order, welcoming members and guests. He emphasised that the main purpose of organising this event is to encourage and motivate children who are the leaders of tomorrow and the torch bearers of the future.

The event began with a Spelling Bee Competition, for which technical support was provided by XYZ Foundation’s volunteers and Founder – Hoshaang Gotla. The competition saw 45 participants from 17 schools compete in a written elimination round, culminating in 10 finalists, who were put through an oral rapid fire spelling round. The top 3 winners were awarded a plaque sponsored by XYZ Foundation and cash prizes from the Club; with consolation prizes for the remaining finalists.

Next was the prize distribution of top 10 entries in the Peace Poster competition (17th November, 2019). The event concluded with the felicitation of  5 children; 1 each from 5 different schools, randomly selected and asked to send 5 nominations of children who excelled in all round activities. A special prize was awarded to Pearl Amalsadiwalla, State and National level TT player who has won several medals and has also been selected as Khelo India Talent by the Govt of India – a prestigious honour accorded to India’s Top 1000 athletes. Her name was recommended by XYZ Foundation. They were awarded a plaque and cash prizes in the presence of their parents and School Principals.

The event was presided over by Lion Prasad Panvalkar, who gave away the prizes and awards and complemented the club on a well-organized event, with special thanks to XYZ Foundation and Hoshaang Gotla, in particular. The meeting ended with a round of fellowship followed by dinner.