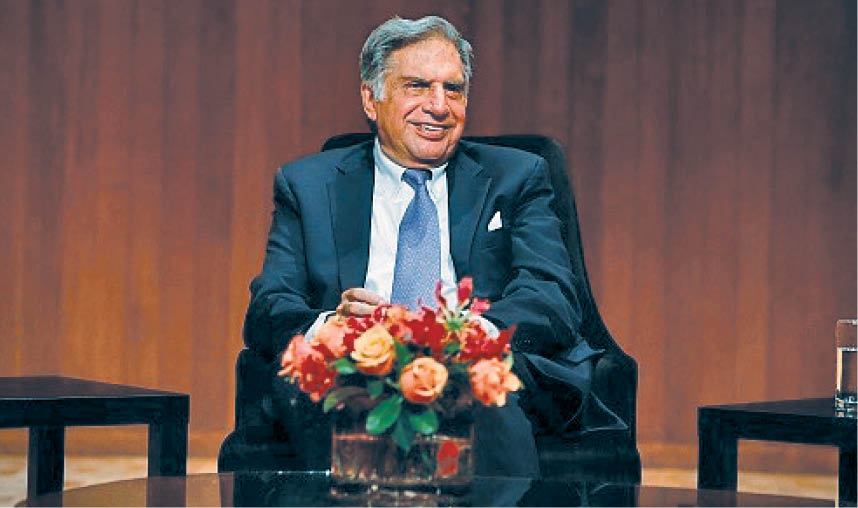 The ‘Accidental Start-Up Investor’ Gets

India’s leading industrialist, revered the world over, and the tallest feather in our Community’s cap – Ratan Tata – is always in the news, for all the right reasons. His life exemplifies a glaring legacy of the very definition of Parsipanu – he stands tall as our biggest inspiration ever – a bigger living legend there never was or could be! At 81 and going only stronger each year, Ratan Tata steals the spotlight effortlessly!

You would think that this illustrious phenomenon, who greatly values his privacy, would spend professional retirement in greater reclusion… dedicated to his passions – spending time with his dogs or flying his Falcon 2000 PJ. But much to our delight, that’s not the case with Ratan Tata – ex-Chairman of the largest Indian conglomerate, Tata Group of Companies, and current Chairman Emeritus of Tata Sons, the holding company of the Tata Group which controls some of the major companies including Tata Steel, Tata Motors, Tata Power, Tata Consultancy Services, Indian Hotels and Tata Teleservices.

On the night of 30th October, 2019, the great Ratan Tata, the recipient of two of India’s highest civilian awards – Padma Bhushan (2000) and Padma Vibhushan (2008) – took to social media to announce his debut on Instagram, impressing the heck out of adults and millennials alike, using the perfect lingo with, “I made it to the ‘Gram!” Within 24 hours later, he had amassed an enviable 400,000 + followers! “I am truly touched by the welcome that the Instagram community has shown me today. I hope I can contribute to this wonderful community in the very same way,” he shared.

As many venture guesses regarding how he would utilize this massive platform – philanthropic initiatives, social entrepreneurship ventures and engaging with the youth seem plausible options for the visionary investor, as Instagram is said to be the future conversation corner. “I don’t know about breaking the internet, but I am so excited to join all of you on Instagram! After a long absence from public life, I look forward to exchanging stories and creating something special with such a diverse community!” wrote Tata, who joined Twitter in April 2011, and commands 7.6 million followers.

The 81-year-old tycoon has been taking a special interest in young startups and entrepreneurs, as has been evident in the recent past. Referring to himself in an interview with the media as “an accidental startup investor”, the Chairman Emeritus of the $110-billion salt-to- software Tata Group, has invested in over two dozen startups since he hung up his boots at Bombay House. In his new avatar as angel investor, he invests via his personal investment firm RNT Associates – and has empowered startups including furniture e-tailer – Urban Ladder; digital payments app – Paytm; travel service – Ola and its electric vehicle arm – Ola Electric Mobility; e-commerce platform – Snapdeal; Fitness startup –  CureFit; Weather forecaster – ClimaCell; Auto portal – CarDekho; Eye wear – Lenskart; home rental platform -NestAway; and of course, the online pet care platform – Dogspot, in keeping with his passion for the pooches!

The startups sector always held great interest but venturing into the same during his tenure with the Tata group could create conflict of interest. So, upon retirement, he started making small token investments in what he considered exciting companies and equipped with learning experience within a few years, he got more involved in this sector that he defines as “very active and has the best minds.” He looks forward to growing his presence in the startups sector based on the funds deployed. “The excitement of being in new areas, participating in something that has not been done is the most exciting and absorbing thing. This is something I am looking forward to in the coming years!” he said.

Relying also on his intuition when investing in startups, he recently shared a few suggestions for young startups, entrepreneurs and investors as under (Excerpts Courtesy: livemint.com):

Invest In Intuition: According to the ageless prodigy, his ‘inner voice’ has worked way better than numbers-crunching! “I found in my case that company selection was more by intuition rather than numbers, and by judging on the intent of the founders and their seriousness more than any other factor,” he explained, when it came to selecting certain projects.

Essential Entrepreneural Traits: The most essential trait for any entrepreneur is to “have a fire in the belly to find an area that is not explored”, as per Tata. An entrepreneur must find an opportunity to make a difference. “The drive to start something new, the fire in the belly, a better way to do something that is being done or a good opportunity to undertake all to make a difference… and above all the courage and tenacity to see it through, be it good or bad, and yet make it happen are the hallmarks I look forward in entrepreneurs,” he says.

Taking Calculated Risks: “When I retired… I started making small token investments from my own pocket in what I considered to be exciting companies. So, what I did was to take some more risks than I might have taken under different circumstances.”

Enjoying The Journey: Anticipating exciting times ahead due to the ‘problem solving’ nature of the surfacing startups, Tata expressed, “The excitement of being in new areas, participating in something that has not been done is the most exciting and absorbing thing. This is something I am looking forward to in the coming years! …I am glad the startup space is growing and becoming so prominent. Now more big companies will recognise that there is another way to do something and that something might be the better way to do cheaper and most cost-effective way!”

Venture Capital – The Way Forward: Tata doesn’t stress over the large cash-burn that startups report month-on-month, saying they are here to stay, indicating venture seed capital funds are the way forward. “Look at other countries, startups have been there for much longer. It goes without saying that this sector will grow and it already has proven to be the case. It will continue to do that in the coming years.”

On The Indian Entrepreneur: “Indians are entrepreneurs at heart. What we need is opportunity to flourish. And I think startups are doing just that. I wish them all success,” concludes Tata