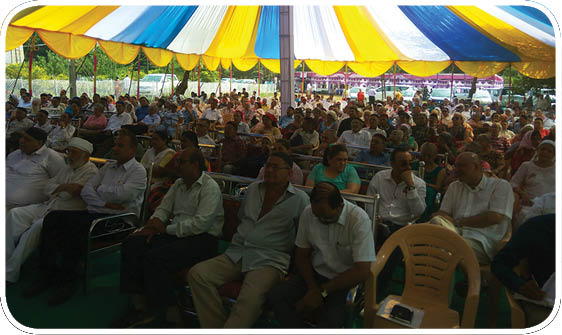 On the morn of 16th November, 2019, when one saw the Gujarat Express train from Mumbai making a special halt at Sanjan station, it could only mean one thing – it was our glorious Sanjan Day! Nearly a thousand proud Zarthostis, yet again, gathered at the grounds surrounding the Sanjan Stumbh to celebrate this auspicious day, which started with a Jashan ceremony at 9:30 am, performed by five mobeds from Udvada and Sanjan. The celebratory program commenced with Paricheher Daviervala introducing the guests on stage. The Humbandagi was led by Er. Phiroze Dastoor from Udvada.

After the initial honors and welcoming of guests with flowers and shawls, the mike was handed over to Er. Phiroze Dastoor who informed the crowd about Sanjan being the birth place of Shreeji Iranshah, which happened around 1,350 years ago. He said that today, our religion in India shows us the way of life and we need to live our lives by rememb

ering our religious teachings. He requested one and all to stay faithful to our religion and always abide with it. Bapsy Daviervala, President of Sanjan Stumbh Committee, welcomed the guests, extending a special thanks to Jadi Rana and the Indian government for giving our community a good treatment at all times.

Renowned cricket umpire Adil Palia, who has officiated in 181 matches under BCCI, stressed on the mantra of hard work and honesty paying in the long run. Ramanbhai Patkar, a local MLA and currently Minister of State for Tribal and Forests in Gujarat, welcomed the Zarthostis gathered on behalf of the government. He expressed a sense of honor on the achievements of the Parsi community and felt happy that Parsis have always considered India their own country. He referred to the promise of Narendra Modi to develop Sanjan, along with Udvada, as a world heritage place, and so the area around the Stumbh will soon have a new look, maintaining the history of the place. 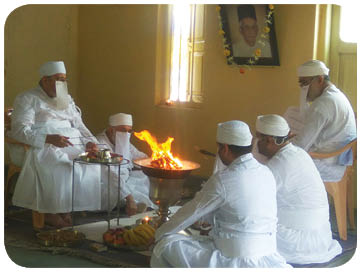 Khushnam Daviervala introduced Praful Patel, current administrator of Daman and Diu, and previously the Gujarat Home Minister. She said that his key objective is change and he was instrumental in making Daman and Diu a totally digital and cashless place. Praful Patel congratulated the Parsi community and saluted them for honestly gathering year after year at Sanjan to express their loyalty to the King Jadi Rana for his gesture shown towards the community 1300 years ago.  During his address to the crowd he stressed on increasing the population of Zarthostis. He applauded the great achievers of the community with special mention of General Maneckshaw, the Tatas as industrialists, Homi Bhabha for atomic research, Madam Bhikaji Cama for judiciary and the great cricketers that the community has given India. He requested the community to keep their pride of being the rarest of the rare community and evaluate their religion along with evaluating the diminishing population crisis.

A vote of Thanks by Paricheher Daviervala concluded the function followed by a vegetarian lunch catered by Kaizad Patel and enjoyed by around 500 Zarthostis gathered on this day.