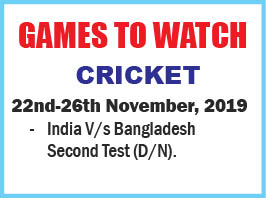 India Women Clean Sweep T20 Series 5-0 In West Indies: Half centuries from Jemimah Rodrigues (50) and Veda Krishnamurthy (57*) helped the women in blue win their fifth T20 encounter by 61 runs against the West Indies women at the Providence Stadium in Guyana, West Indies. Batting first, India notched up 134-3 in 20 overs. In the process of reaching their half tons, Jemimah pelted three boundaries while Veda smashed four to the fence. Amongst the Windies bowlers, Hayley Matthews, skipper Anisa Mohammed and Aaliyah Alleyne picked one wicket each. In reply when they came out to chase down the target, they only managed 73-7 in their 20 overs as Kyshona Knight top-scored with 22. For the Indians, Anuja Patil snapped up (2-3) in three overs while Radha Yadav, Poonam Yadav, Pooja Vastrakar and Harleen Deol snared one wicket each.

LeBron James Makes History: Los Angeles’ Lakers LeBron James became the first player in NBA history to record a triple double against every team in the league, as LA Lakers won 112-107 over Oklahoma City. The star basketball player finished with 25 points, 11 rebounds and 10 assists in a hard-fought game that went down to the wire.

India Lose Against Oman: The Indian football team are virtually knocked out of the 2022 World Cup qualifying round after losing 0-1 V/s Oman. Mohsin Al Ghassani scored the lone goal for Oman at the Sultan Qaboos Sports Complex Stadium. With just three points from five matches, India remains at fourth spot in the Group E table.