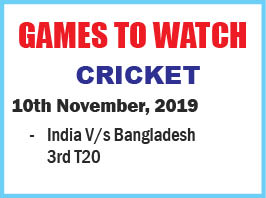 India Beats Bangladesh in 2nd T20: An outstanding batting show of (85) from Indian skipper and Man of the Match Rohit Sharma ensured India win the second T20 in style by 8 wickets and thus keep the series alive against opponents Bangladesh. Batting first, Bangladesh put up a total of 153-6 in 20 overs as Mohammad Naim top scored with 36. Yuzvendra Chahal snapped up 2-28 in four overs. He was well supported at the other end by Deepak Chahar, Khaleel Ahmed and Washington Sundar who picked one wicket each. In reply, India cruised to victory finishing with 154-2 in 15.4 overs. En-route his 85 off 43 balls, Rohit pelted six boundaries and six maximums. Shikhar contributed 31. Both openers stitched a 118 opening stand. KL Rahul remained unbeaten on 8 while Shreyas smashed 24 in 13 deliveries.

Smriti Mandhana Is 2nd Fastest Indian To Get 2,000 Runs: A splendid show from Indian women ensured that they won their three match one ODI series against West Indies 2-1. They overpowered the Windies Women by 6 wickets during the third and final match at Sir Vivian Richards Stadium in Antigua. In the process of chasing down 195 to win, opening batswomen Smriti Mandhana starred as she scored 73 off 63 deliveries. This great knock not only helped the visitors grab the series, but it made Mandhana the second fastest Indian player and the fastest Indian woman to complete 2,000 runs in ODI cricket. She reached the milestone in her 51st innings.
.