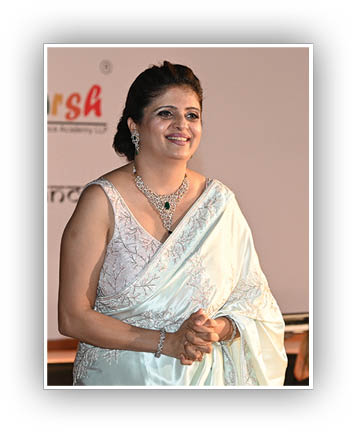 Surat-based, globally renowned Utkarsh Dance Academy LLP, founded by Behnaz S. Todiwala, celebrated its glorious Silver Anniversary, by proudly presenting ‘The Poetry of Dance’, at Sanjeev Kumar Auditorium, in Surat, on 16th November, 2019. The grand show was attended by community leaders, VVIPs, media and over 1,100 attendees, who were thrilled by the presentation and the skills of 215 young and talented classical dancers, who performed on the occasion of the completion of the academy’s twenty-five years.

The journey of Utkarsh was showcased in a unique way by Machhindra, a renowned sand artist, who mesmerized the audience with his talent. The classical productions of ‘Natyaratna’, with its vivid expression of emotions, poses from poignant to poetic, joyous to spiritual, were short dances based on signature repertoire. ‘Natyaratna’ began with a Ganesh Stuti on piano and saxophone followed by the fusion of various folk dances like Lavani with Bharatanatyam, Tippani and Ghoomer. There were live singers and musicians who added to the excitement of the show.

The audience especially delighted in the amalgamation of saxophone and Bharatnatyam. Next, was the ‘Shivoham’ – an ode to Lord Shiva, vividly describing stories of the 12 Jyotirlingas, while enlightening the society of our glorious history. Celebrities who graced the event included Jagdish Italiya (Trustee – Sanskar Bharti School); Ajita Italiya (socialite and fashion Icon); Neelaben Raval; Shri Ganesh Iyer (Kala Guru); Dr. Delnaz Balsara Sharma (Mrs. Asia Universe) and Roopal Shah (philanthropist and socialite). By the end of show the audience was mesmerized by the insurmountable talent of over 200 participators, from the age of 6 to 50 years!

The Academy has been devoted to preserving India’s cultural heritage through Classical and Indian Folk dances, for 25 years now.

A Bharatnatyam connoisseur, committed to the practice for 40 years, Behnaz Todiwala is a Gold Medallist in BA (Visharad) and MA (Alankar) in Bharatnatyam, making her the first Parsi woman in Gujarat and the third Parsi pan-India in the field of Bharatnatyam. She has been felicitated with innumerable prestigious national and international awards for her outstanding contribution in the field of Indian Classical and Folk Dances.