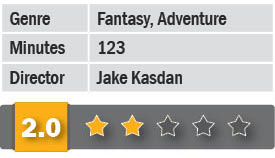 It took 22 years for the first sequel to be made – ‘Jumanji: Welcome to the Jungle’. And then just a couple of years for this, the second sequel. The success of ‘Jungle’ possibly prompted Kasdan, who directed it, and one of the co-writers, to helm this one too. Jumanji, based on the 1981 picture book – just 32 pages – by Chris Van Allsburg, is about video games and changing avatars. Four college pals have moved on in life – three have various vocations. The fourth, Spencer (Alex Wolff) goes missing from New York University. And the others dive deep into their video games and change avatars to find him.

Dwayne Johnson as Dr. Smolder Bravestone, Karen Gillan as Martha, Jack Black as Prof. Sheldon, Nick Jonas as Alex, and Kevin Hart as Franklin reprise their roles from the earlier franchise. Coming on board for ‘The Next Level’ are Danny DeVito as Eddie (Spencer’s grandfather) and Danny Glover as the latter’s long-lost friend and business partner Milo.

From jungles to deserts to snowy mountains, Jumanji: TNL devotes a couple of hours to throwing each of the avatar’s personalities into disarray. Dwayne Johnson and Jack Black are unobjectionable while DeVito has a few scenes only at the beginning and at the end. The CGI scenes could have been done far better, especially the ones involving the mandrills and ostriches. If it wasn’t a video game, one would have wondered whether it was a board game or a bored game.