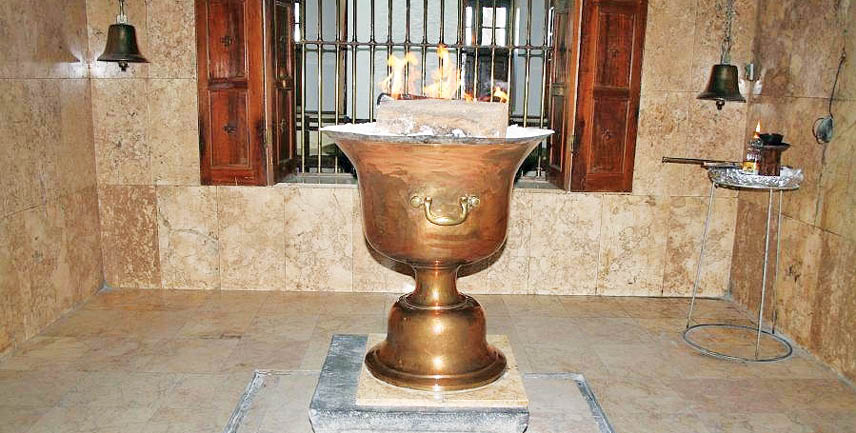 The Parsi Zoroastrian Guards Of The Holy Fire (PZGHF) has been established with the objective of protecting, preserving and safeguarding our fire temples, and other community estates, like sanatorium, burial grounds, tower of silence, etc.

PZGHF has been granted registration as a public religious trust by the Charity Commissioner, Maharashtra, under the Bombay Public Trusts Act. Nowadays, registration of public trusts is a long and complicated process. Hence, the delay. Application has been made to the income-tax authorities to grant exemption from tax. Being a public religious trust, donations, however, will not be eligible for 80G deduction.

Bank accounts are being opened. Nasha Tabelawalla, a deeply committed young Zoroastrian with good IT skillsets, is functioning as the CEO of the Trust, since the last twelve months. Before the end of FY20 (March, 2020), the Trust will be capitalised, in the first phase, to the extent of around Rs. 1.5 Crores. Until then, no external donor will be approached.

The present trustees are: Hosi Dastur (Managing trustee of Wadiaji Atashbehram & the Boyce Agiary), Noshir Dadrawala, in his capacity as religious scholar and charity / trust management expert, and Berjis Desai, lawyer and writer. Some very well meaning Parsis are interested in joining as trustees, as and when the Board is expanded.

Over the last twelve months, we have physically visited, inspected and surveyed 49 fire temples in Mumbai and Thane; and 31 fire temples in Surat and its surrounding areas. A detailed report for each of these 80 fire temples has been published alongside this article.

On the basis of daily inflow of worshippers, soundness and stability of the structure housing the Fire, Ambience of its surroundings – we have classified each Holy Fire as A, B, C or D. Under the column, ‘Special Situation’, we have highlighted in brief, where action of the community is required. Like any classification, our grading is subjective and meant only to understand the situation of each of our Holy Fires better. Despite due care, factual inaccuracies may kindly be corrected, by writing to the Trust, at nasha@pzghf.com.

We urge readers to carefully study these reports. Fire temples in Pune, Navsari, Udwada and Bharuch are also being surveyed and the relevant reports will soon be published. In the meanwhile, we specifically draw your attention to the serious situation concerning the following fire temples:

Volunteers are required to provide urgent assistance to these 8 fire temples. Finance will be arranged if a proper action plan is worked out. The Trust, while primarily addressing our fire temples, will also seek to safeguard the interest of other community institutions like sanatorium, etc.

The registered trust deed is open for inspection and a copy will be furnished, free of cost, to any Parsi Zoroastrian. The Objectives of the Trust and the Minimum Doctrinal Belief to qualify to be a trustee, are set out here. Constructive suggestions to improve the efficiency of PZGHF are most welcome. We acknowledge the assistance rendered by Xerxes Dastur, Chartered Accountant and BPP trustee, in registering the Trust. 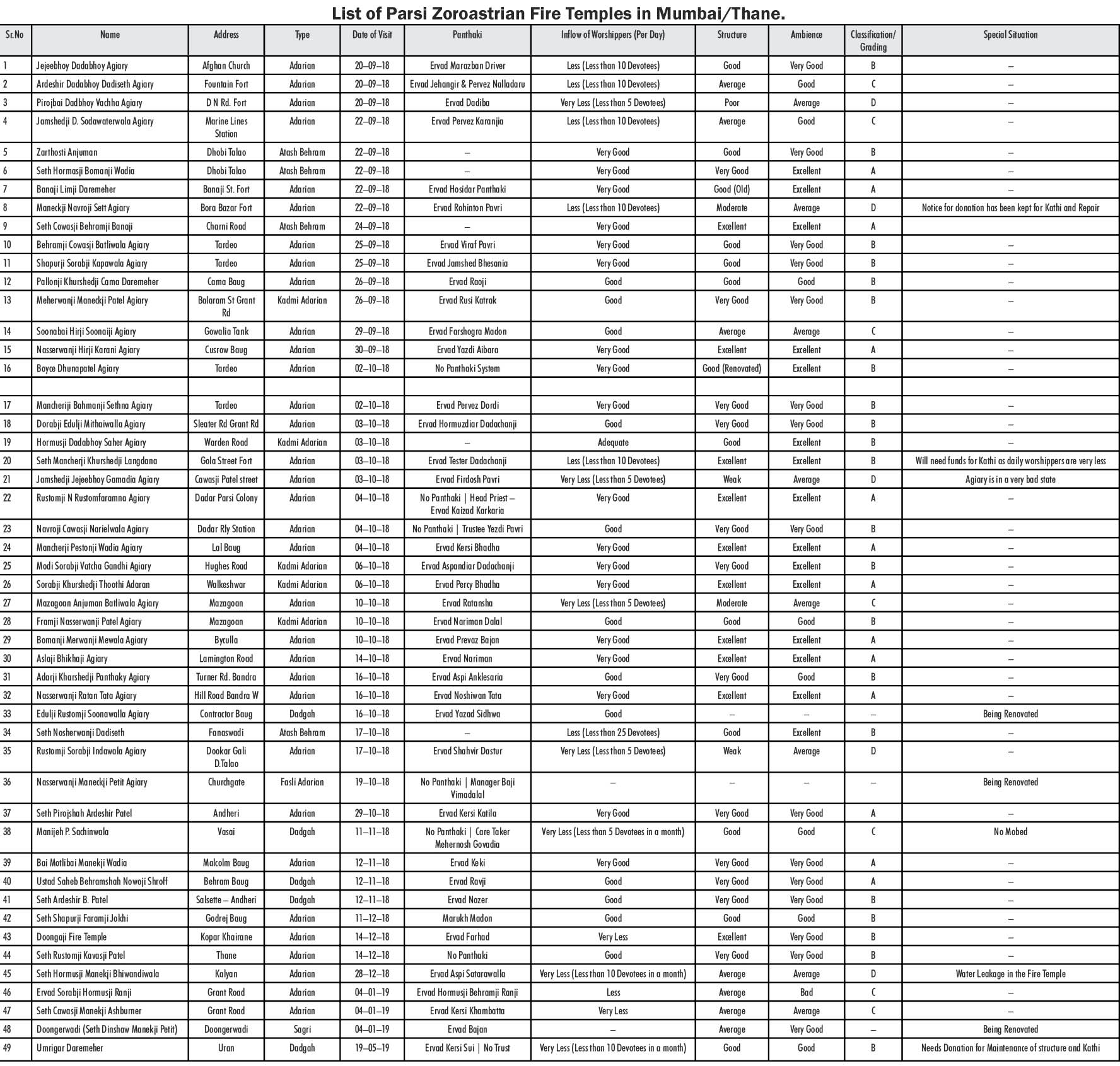 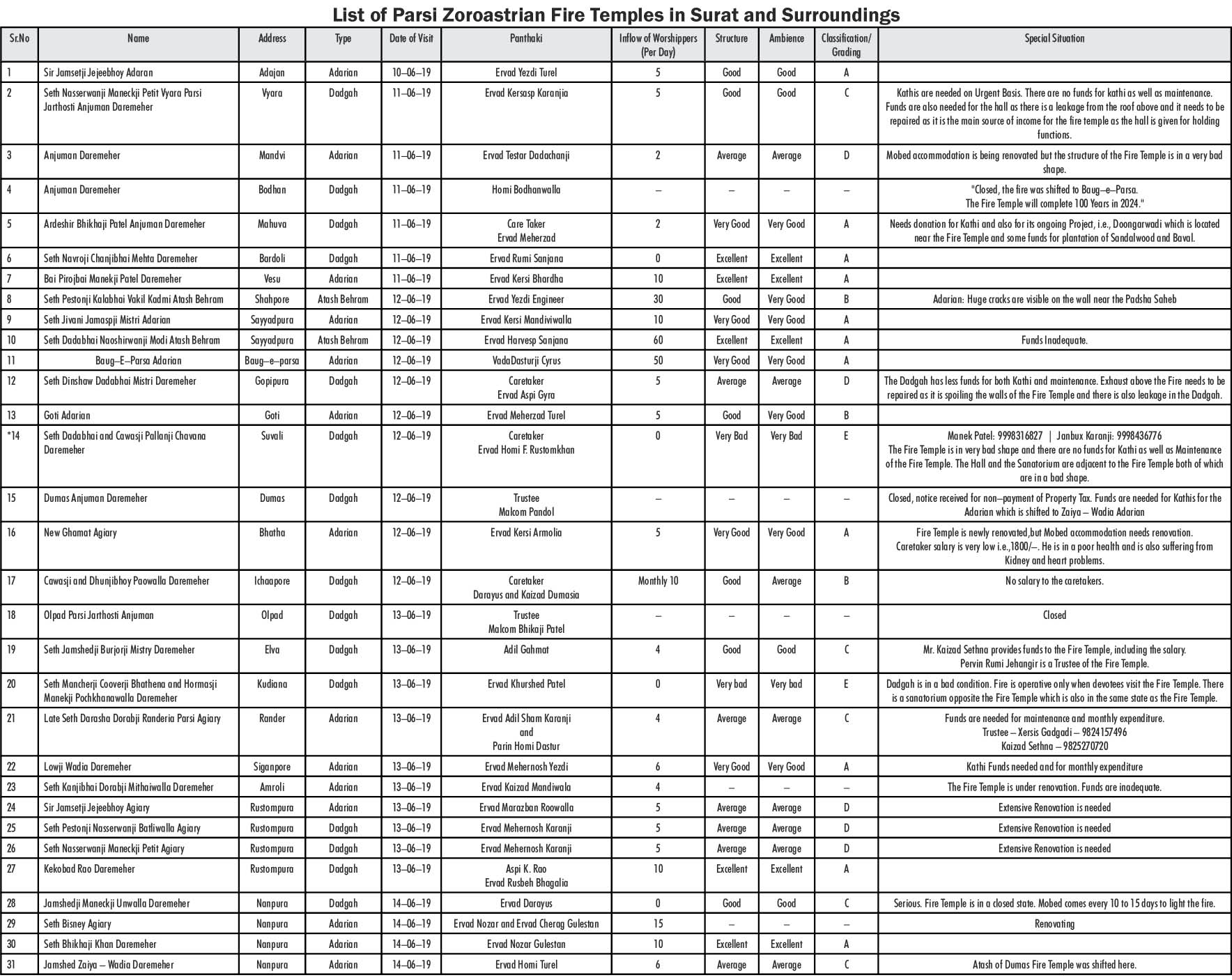