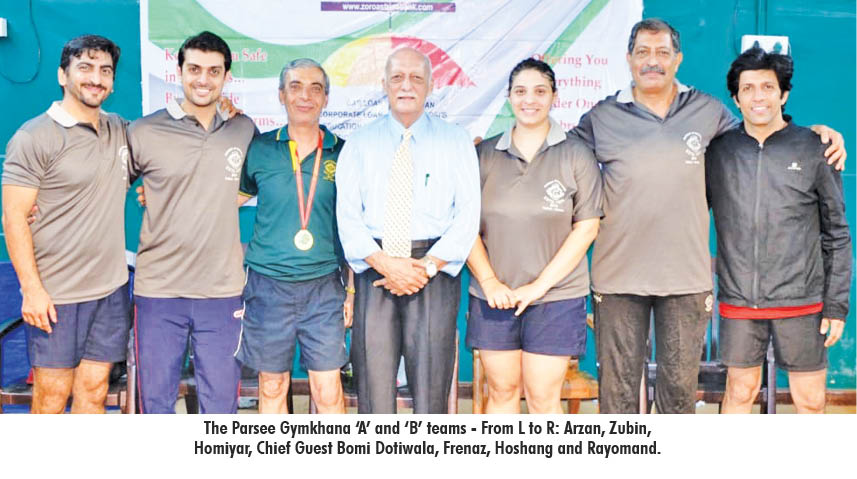 The 6th All-Parsee Table-Tennis tournament organised by the 134-year-old Parsee Gymkhana (Marine Lines) on 7th and 8th December, 2019, saw 90 participants – from across Maharashtra and Gujarat – vying in 5 events.

The exciting two-day event got underway with the qualifying rounds of Open Singles and the Under-14, which attracted entries mainly from Pune, Godrej Baug, Salsette and Bharucha Baug with youngsters from Salsette and Godrej Baug excelling as Pearl Amalsadiwalla beat clubmate Merwyn Patel to take the U-14 crown. 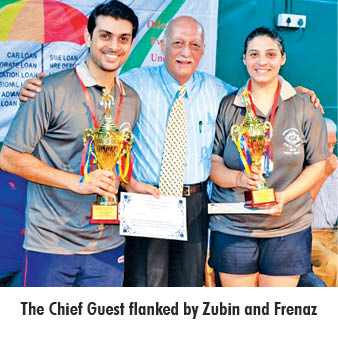 In the Open singles, 64 players competed in 8 groups to reach the final round of 32 in the main draw. In the Open doubles, the seedings went for a toss as youngsters Sohrab Mehta and Viraf Toddywalla shocked second-seeded Carlshen Wadia and Hormaz Pithawalla, while Rayomand Marolia and Arzan Khambatta accounted for third seeds, Sarosh Shroff and Homiyar Mohta in the quarter-finals. In the Veterans Singles, Sarosh Shroff retained the title.

The Teams event aroused maximum interest and threw up the biggest upset. After disposing off Cama Park ‘A’ in the semis, Parsee Gymkhana ‘B’ found themselves up against compatriots and reigning champions, Parsee Gymkhana ‘A’. In the first match, after losing the first game 5-11, Arzan Khambatta stormed back to take the next three games 15-13, 11-6 and 12-10 to shock Frenaz Chipia and go one up in the best-of-five team finals. After Zubin Taraporewalla equalised by beating Rayomand Marolia, the pair of Frenaz Chipia and Hoshang Katrak lost to Rayo and Homiyar Mohta in five hard-fought games. Zubin quickly made it 2-2 by beating Arzan. In the final singles match, Homiyar scraped past Hoshang to take his team to a memorable win in a thriller worthy of a final.

83-year-old veteran ad, theatre, and film personality, Bomi Dotiwala, who was the Chief Guest, was impressed by the standard of Table-Tennis. ‘The Complete Raymond Man’ exhorted the youngsters to passionately pursue their calling. International Chief Referee and five professional umpires had specially come down from Pune to officiate in the tournament.

As in the past five years, Parsee Gymkhana’s hospitality included giving a complimentary table-tennis T-shirt, besides lunch on both days and a lavish dinner for all competitors after the Prize Distribution ceremony. Speaking on behalf of the players, Ardaviraf Motiwalla of Godrej Baug commended the Gymkhana for a well-organized tournament and its efforts at providing a number of benefits and facilities for the participants. The Gymkhana whole-heartedly thanks sponsors – Meridian Trade-Place Shipping Co., The Zoroastrian Co-op Bank Ltd., Naryman K. Dubash Foundation, Shri Bal Vyayam Mandir, Mr. Burjor Antia, Gustadji N. Menty and Homjee Chinoy Charities, Raymond Made-to-Measure, AMCO and BPP Trustees Viraf D. Mehta and Xerxes V. Dastur.