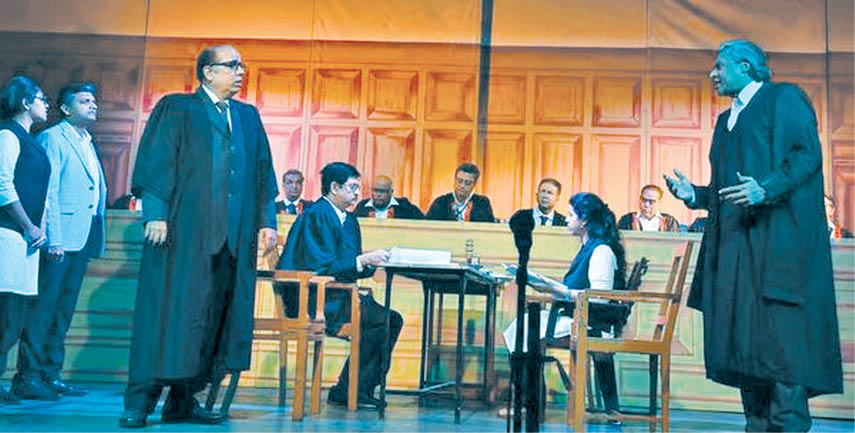 As a tribute on the centenary birth anniversary (January 16, 2020), of one of India’s foremost economists and jurists – Nanabhoy or ‘Nani’ Ardeshir Palkhivala, Chennai’s Dummies Drama troupe inaugurated its new two-hour play, ‘Dharaniyin Perumai’ – meaning ‘The pride of the world’ – a docu-drama of Nani Palkhivala, staged at Mylapore Fine Arts, which covered several important aspects in Nani’s life, right from his childhood

Over 40 actors portray different characters and stages in Nani Palkhivala’s life, including his parents and siblings; showing how right from childhood, Nani was a voracious reader, to earning his Master’s degree in English literature, and in the process, overcoming his stammer; Enrolling in Mumbai’s Government Law College despite his initial aversion to law; becoming an excellent barrister, with his remarkable presentation skills and memory; authoring ‘The Law and Practice of Income Tax’, which has since become a primary reference for the Indian Tax Code; his famous budget speeches in the late 1950s; being a strong defender and protector of the Indian Constitution (including the famous 1973 case, when the Supreme Court of India ruled that Article 368 of the Constitution “does not enable Parliament to alter the basic structure or framework of the Constitution”).

Scriptwriter and director Sreevathson does a good job, with dialogues being the main strength of the play, as Nani’s punchlines – “Law must win, not lawyers” and “We’re not an underdeveloped country; we’re ruled by underdeveloped minds” – received great applause. The play ends with Nani being conferred the Padma Vibhushan.

Sreevathson’s main aim was to inspire and create an awareness of this great personality among today’s generation through his play. He plans to develop an English remake of the play and take it across India. With an engaging script and brilliant performances by actors Prasanna and Sridhar, the play serves as a good source of info-tainment about one of our Community’s greats – the inimitable Nani Palkhivala!