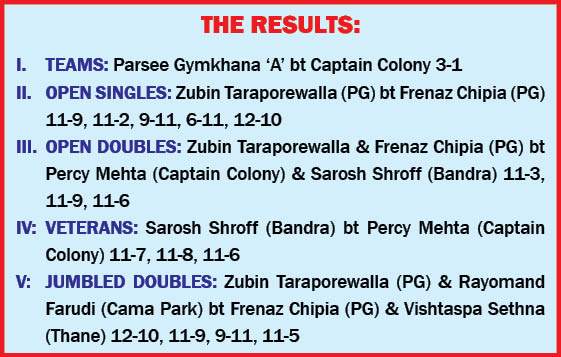 The change of venue – Cusrow Baug to Rustom Baug – did little to alter the fortunes of reigning champions Parsee Gymkhana (Marine Lines), as they steamrolled to victory in four of the five events held at the magnificent Rustom Baug indoor pavilion on the 22nd and 23rd of February, 2020. FOZAWAC President Adi Mehta, in his welcome address, advocated a judicious blend of studies and sports for youngsters for an all-round mental and physical growth. Chief Guest Xerxes Dastur, in his motivating speech, exhorted the Parsee youth to participate in as many open tournaments within the city to get match exposure and also assured players of support and assistance.

With players coming from Surat, Navsari and Pune for the annual FOZAWAC Table Tennis Tournament, play commenced early on both days to accommodate the players’ favourite – Jumbled event. While there were no major surprises in the qualifying stages of the Open Singles, the main draw saw a couple of upsets with Hemin Sachinwala getting the better of Arzan Khambatta and Rayomand Farudi squeezing past an injured Homiyar Mohta. In the finals, Frenaz almost gifted herself a deserving first wedding anniversary present before going down in five hard fought games to hubby, Zubin.

In the Open Doubles, the only upset was the fancied pair of third-seeded Arzan Khambatta and Rayomand Marolia of Godrej Baug defeated by Salsette’s Nozer Amalsadiwalla and the young Merwyn Patel. In the Veterans’ event, Ardaviraf Motiwalla (Godrej Baug) continued his excellent form from the PG tournament two months ago to first shock Hormaz Pithawalla and then get past Neville Pithawalla of Mumbai, before bowing out in the semis to the tenacious and ultimate winner – Sarosh Shroff. In every event in their matches against younger opponents, old warhorses – Percy Mehta and Sarosh Shroff showed that they are still forces to reckon with!

Match Of The Day: It was the Team event which, as always, whipped up the maximum frenzy amongst players. In the semifinal, Cama Park ‘A’, which had narrowly pipped Parsee Gymkhana ‘B’ in the quarters, came up against second-seeds Captain Colony. In the first match, Carlshen Wadia of Cama Park beat Farzan Malesaria, representing CC. Sohrab Mehta then shocked veteran Percy Mehta of CC to give his team a 2-0 lead. With the second seeds staring at imminent defeat, the experienced pairing of Sarosh Shroff and Percy Mehta managed to beat the established duo of Carlshen and Hormaz Pithawalla. Sarosh made it 2-2 by narrowly getting past Sohrab. In the final and deciding match between Hormaz and Farzan, which saw fortunes fluctuating, the latter scraped through in five exciting games to take his team through to the finals.

Rusi Bhumgara, General Secretary of FOZAWAC, was applauded for his contribution towards encouraging the community in sports. The players were unanimous in their praise for President Homiyar Shroff of Rustom Baug Welfare Association for their generous use of Sir Ness Wadia Memorial Pavilion.

View all posts by By PT Special Correspondent Hoshang Katrak →