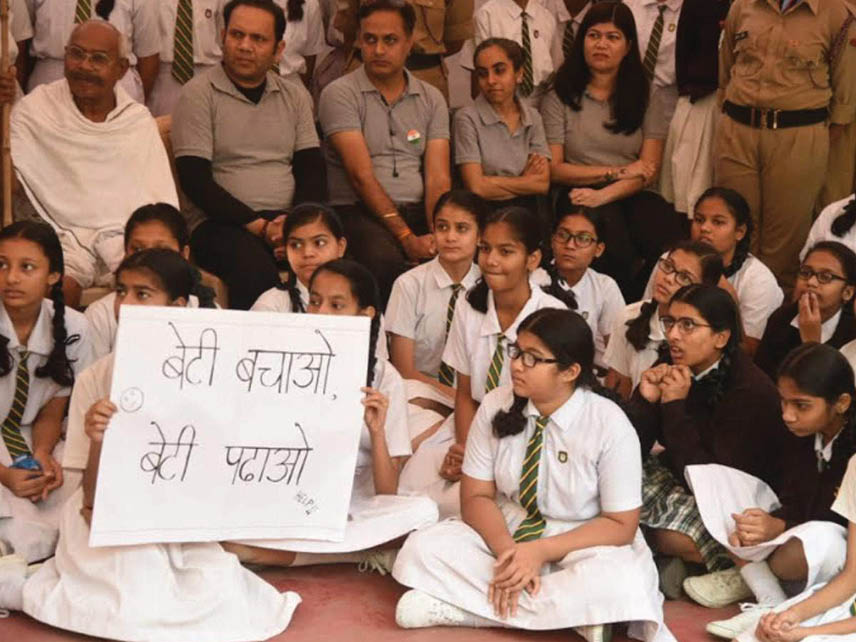 On 22nd February, 2020, the brave girls of Tata Parsi Girls School, in Nagpur, adopted Gandhigiri as a last option, to protest the eve-teasing and physical misconduct menace, which is on the rise in the area surrounding the school. Accompanied by faculty and members of a social organization named Center for Education of Human Rights Research and Advocacy (CEHRRA), nearly a hundred students were seen ‘armed’ with roses and banners with messages like, ‘Don’t Stare At Us’ and ‘Beti Bachao Beti Padhao’, to deter encroachers who set up a chor bazaar (flea market) on the pavement, attracting mischief mongers who assemble there. However, due to police presence and advance notice of the planned event, all the street vendors decided to abstain from setting up shop that day.

The girl students have, for a while, complained of being eve-teased and have also made allegations of abuse, harassment and physical assault by street vendors and encroachers. All these issues were raised by the school administration. However, as per media reports, the Ganeshpeth Police Station denied receiving any such complaints, as stated by Police Inspector Shivraj Kumre.

Principal of Tata Parsi Girls High School, Shanoor Mirza shared that the vendors opposite the school pose a security threat for the girls as they passed lewd comments and stared vulgarly at the girls, making them extremely uncomfortable and terrified. The School’s Managing Trustee, Thrity Patel decided to deal with this issue by roping in CEHRRA, where she presides as its President, and planned a Gandhi-style awareness campaign to apprise all stakeholders of the ordeal the young girls were being put through. Having exhausted all other options, they resorted to Gandhigiri, she explained. She said that the Nagpur Municipal Corporation (NMC) had taken action against the vendors but within a few days, things were back to square one. It was the same story with the cops – the moment they were gone, the miscreants were back. She hopes that the authorities take strong action.

The school administration is concerned over the issue especially as Board exams are approaching in March and they want the school to be safeguarded. The school management has also given a memorandum to the State Home Minister – Anil Deshmukh. highlighting the problems faced by the girls. PI Shivraj Kumre has assured that they will keep an eye in the area to avoid any kind of incidents.