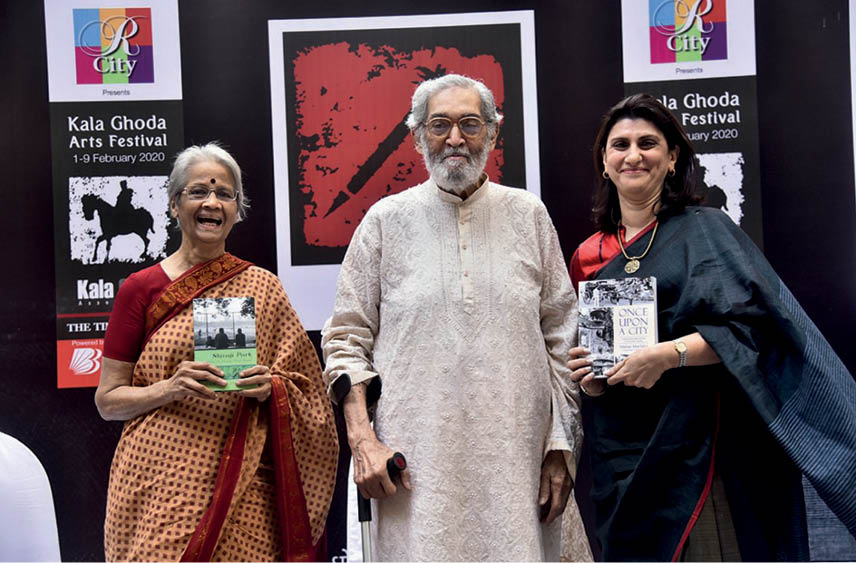 Born and raised in Bombay, Meher Marfatia graduated from St. Xavier’s College with English Literature and Psychology, and holds a Master’s degree in English Literature. She was awarded the Scholarship in Advanced Journalism Studies at the International School of Journalism in Berlin, Germany (1989). An acclaimed journalist and independent publisher (49/50 Books), Meher has lent her dynamic expertise to numerous renowned publications. Her long-standing interest in documenting lost communities, ethnic diversity and the performing arts has culminated into excellent articles in leading national newspapers and magazines over 35 years, including Bombay Times, Sunday Midday, The Swaddle (online column). Recent volumes she text-edited for reputed publishing houses include ‘Changing Skylines: The Shapoorji Pallonji Sesquicentennial 1865-2015’ and ‘Chandigarh is in India’.

Even as her journalistic efforts were increasingly lauded for their outstanding content and style, Meher Marfatia started an essay series in the Sunday Mid-day in 2016 (and ongoing), which rose to even greater heights – the extremely popular ‘Once Upon A City’ column, which accurately captures the spirited essence of Bombay, its places – forgotten and popular – and its people. Having earned great popularity and appreciation, four years later, these were launched as a compendium in a book with the same title. ‘Once Upon A City’ celebrates Bombay’s realities in the form of explorations and stories and reviews of its places and people – affording as much attention and respect to the unknown, as to the iconic. This anthology is the perfect tribute to maximum city! ‘Once Upon A Time’ was launched, in association with Mid-day, on February 8, 2020, by Gerson daCunha, at Mumbai’s popular Kala Ghoda Arts Festival.

Parsi Times catches up with the city’s favourite chronicler and columnist, Meher Marfatia…

Meher: With a lot of readers constantly asking me to consider collating these articles in a book form, I guess it was a just matter of time! Also, there was so much more material that I had researched but was not published which I wanted to share with readers. Since I still had so many findings and interview notes which were with me, I create shadow files, storing such extra interesting nuggets. In addition to this content, I always receive a number of mails from my readers who write to me as soon as a new column is published, generously offering a whole log of more information, including their own personal memories of the neighbourhood along with photographs. All these inputs – theirs and my own unpublished notes – needed to be compiled as expanded essays. The book also shares outstanding photo by Foy Nissen and Sooni Taraporevala which haven’t been published, as also 50 maps.

PT: Tell us more about the book

Meher: In this primary edition I’ve expanded on a selected set of 50 alphabetically arranged columns representative of Bombay, including South Bombay, and its suburbs and midtown localities, with the same depth. These are more challenging because not many know about their genesis or how these flourished as pivotal hubs contributing to the city’s growth and wellbeing. The book offers fresh information via first-person accounts – including, from, veteran journalist Kalpana Sharma on growing up in Model House in a multicultural area like Kennedy Bridge-touching Procter Road; actor Keith Stevenson on how his parents’ salon Raechelle, yet under Kemp’s Corner flyover, was a warmly welcoming spot that nurtured lifelong relationships, besides contented clients. It was lovely reconnecting with people featured earlier, updating myself with their lives in the places we had originally met.

PT: Share your special bond with Mumbai and what inspired/triggered this unique journey via your popular column in Sunday Mid-day.

Meher: I wanted to go deeper into exploring a Bombay we’re losing unimaginably fast. In 2000, my first book on the city – ‘Little Mumbai’, was about the fun things hands-on parents can do to make the city interesting for kids. Having two curious children of my own, I romped about town with them, as babies tucked in bassinets! I felt fired by the idea of putting together Little Mumbai. When Time Out magazine launched here, I wrote Time Out Mumbai for Kids. Both books, though ostensibly a round-up of city precincts and activities for the young, found me flooded with information that just got more interesting by the day to dig deeper. A broader scope was the next step… and there was ‘Once Upon A City’!

PT: You have beautifully captured the soul of Mumbai with your delightful stories – people and precincts, past and present. What about Mumbai, stands out to you, most of all, as a writer and why?

Meher: I find it a city of spectacular hidden surprises, ours to unearth, discover and document to mine for posterity. Future generations need to know how its present residents have interacted with events in the past here, so that they can pave the way forward for the city.

PT: How would you express Mumbai’s journey/evolution over the past few decades?

Meher: Not a question that can be answered easily here but cataclysmic occurrences have included, all the way from the plague of 1896, to the freedom struggle and Independence, then Partition, a couple of decades down the Samyukta Maharashtra Movement of 1960, the textile strike and mills closure from 1984, the communal riots of the early 1990s… up to present-day political bigotry. Each of these transitions have left the city impacted in a different state of flux. The political and socio-cultural histories of Bombay have constantly been rehauled and rewritten and continue to be.

PT: What is the most inspiring aspect about Mumbai to you?
Meher: Two outstanding aspects: that it is a city blessed by the endeavours and service of hundreds of philanthropists and civic authorities, many among them Parsi. And second, that Bombay is a working-class city: there is much beauty and dignity in this. I see grace under pressure every single day I am out working in very diverse city precincts.

PT: How would you describe Mumbai’s Parsis?
Meher: Proud to report that no matter which part of Bombay I map for ‘Once Upon A City’, I find Parsis have played a pivotal role in building the city and having it flourish. Our forefathers were so very illustrious in the past. Their descendants rely a bit too much on basking in their ancestors’ glory. But on the bright side, we have a present generation that is exceedingly talented in a variety of ways.

PT: What message would you like to share with our community?
Meher: Get more liberal. Quit being so insular. Instead of opening out more and more as our numbers dwindle, we are getting mired in dogma and prejudice, stalling our own onward journey.

PT: Are you looking to author other books or a sequel in the future?
Meher: Always a lovely, looked forward to possibility, provided I have sponsors as gracious as those that made this edition a reality – Cyrus Guzder; Farooq Issa – Phillips Antiques; Jamshed and Shirin Guzder Trust; MDM Jeejeebhoy Trust; Mariwala Charity Trust; Pheroza and Jamshyd Godrej; Rahul daCunha; and Yusuf and Farida Hamied Foundation

Once Upon A City by Meher Marfatia is a 276, all-coloured pages book published by 49/50 Books. It is available in bookstores and online as well as at Parsi Times office.