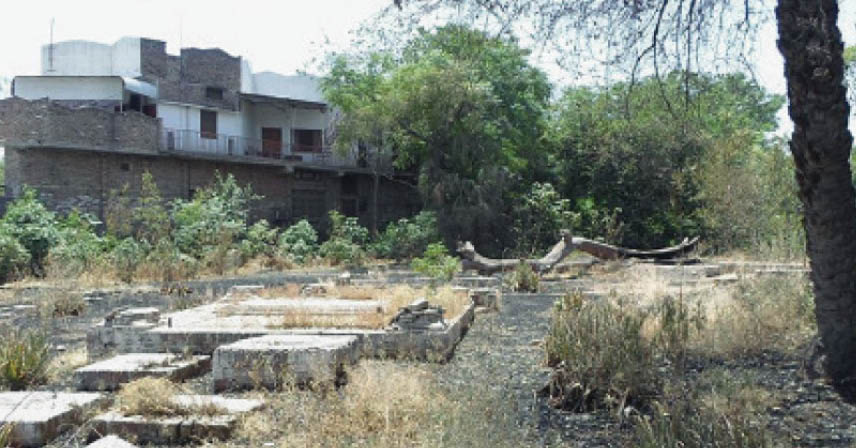 The over 100-year-old, historic Parsi cemetery located in Peshawar Cantonment in Pakistan is threat of encroachment, as it has become a haven for drug addicts and a junkyard for local residents. One such resident claimed that some individuals, apparently the gunmen of land grabbers, late in the night walked up to the graveyard and began removing bricks of its boundary walls and made off along the uprooted bricks. “According to the Cantonment Board’s record, the place bearing plot number 323/CB under 514 survey number has been allocated for the graveyard of Parsi community and the person involved in any kind of its land transaction will be responsible for her/his own loss. If notice of this plunder is not taken, the graveyard will be encroached upon because no member of the Parsi community seems to be left behind in Peshawar to take care of the property,” he warned.

The graveyard, which comprises many cemented graves with slabs inscribing brief information of the deceased, was considered to be the last symbol of the Parsi community that once happily lived in pluralistic and multilingual Peshawar since mid-19th century.

The Karachi Zarthosti Banu Mandal (KZBM), a community welfare organisation, stated in its 2015 report that it had conducted the first complete survey of Pakistan’s Zoroastrians in 1995, under the supervision of Toxy Cowasjee, sister-in-law of the noted columnist, late Ardeshir Cowasjee. The survey found that 2,831 Parsis lived across the country – 2,647 in Karachi, 94 in Lahore, 45 in Quetta, 30 in Islamabad and Rawalpindi, 8 in Multan, and 7 in Peshawar.

As per historian, Akhundzada Arif Hasan, Parsis were brought to Peshawar by the British colonial authorities for the purpose of forming a solid trade backbone, as they were renowned for their scruples and integrity and their support for British and European culture. The British administrators made the Parsis reside within the exclusive “whites only” British military cantonment areas for reasons of safety. He said that Parsis normally ran sophisticated businesses, dealing in Western goods and technologies and they were also employed by the British on those jobs that could not be trusted to other “natives” or for which the latter were clearly unfit.

The cemetery comprises a total of 50 graves, with the oldest one dating to 1890, and the last one from 1993. It is part of a large compound allotted to the Parsi community for this purpose. This compound had full residential facilities for a caretaker, which can be seen, and a lot of the land is still unused. However, over the past 25 years, Pakistan’s once numerous and thriving Parsis had steadily migrated to western countries like Canada and Australia for obvious reasons.

An official of Peshawar Cantonment Board, when contacted, said that a portion of the boundary wall had been damaged while the cemetery was still intact as no one could encroach upon it. He said that relatives of the deceased settled either in other cities in Pakistan or abroad still showed up for paying respects to their near and dear ones buried there.