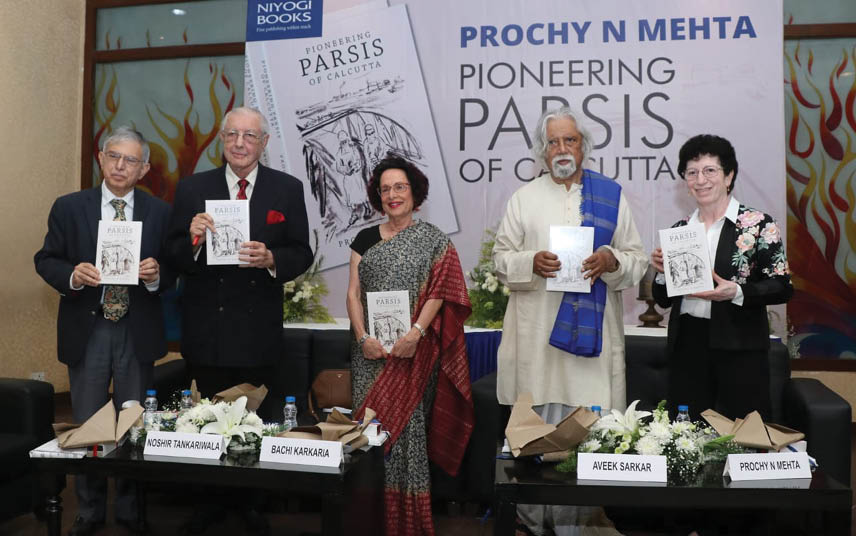 The book Pioneering Parsis of Calcutta, written by Prochy N Mehta and published by Niyogi Books, was launched by Aveek Sarkar, Vice Chairman and Editor Emeritus of ABP Group, at the Olpadvala Memorial Hall, on 18th February, 2020 at the Olpadvala Memorial Hall in Kolkata. The book cover – with the image of a Parsi priest crossing the old Howrah Bridge, carrying the ‘alaat’ – has been illustrated by Swaroop Mukerji. 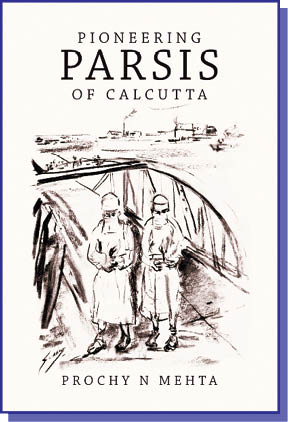 The launch was followed by a discussion with Bachi Karkaria (Ex- Editor, Times of India columnist and author), Noshir Tankariwala (Senior Trustee of the Late Er. DB Mehta’s Zoroastrian Anjuman Atash Adaran), and the author Prochy N Mehta. The session was moderated by Sam Balsara (Founder Chairman of Madison World).

Speaking on the occasion, Bachi Karkaria said, “The byproduct of this book is more far-reaching. Prompted by her crusade to put intermarried Parsi girls on par with intermarried men in allowing offspring into the faith, Prochy N Mehta has produced an important book on Kolkata’s eminent Parsi pioneers.”

Pioneering Parsis of Calcutta owes its origin to its author’s passionate desire to learn more about her Parsi heritage by enquiring into the community’s recent history. This initial curiosity turned into a voyage of discovery, which changed her perception of her community and awoke in her an intense pride in the Parsi stalwarts of yesteryear. Mehta’s meticulous research reaped rich dividends as she slowly dusted off the cobwebs of history that revealed the pioneering Parsis’ arduous journey to Kolkata, their forward thinking, their broad-minded approach, their willingness to give and to improve the lives of all around them. These extraordinary Parsi men and women played a prominent role in society by taking upon themselves the responsibility of helping one and all, regardless of class, caste, creed, or colour. Their ability in business and faith in the future was matchless. These early Parsis were not afraid of taking on the establishment and fought publicly to resolve disputes where the orthodox members were unwilling to give the reformists their way. 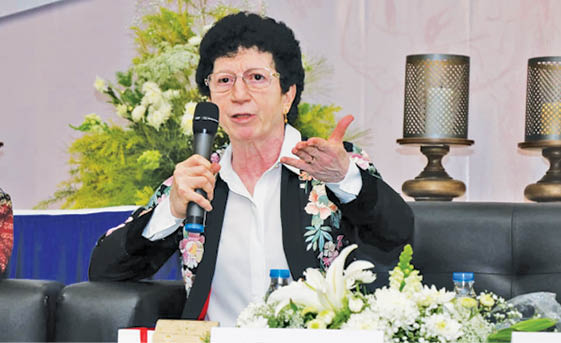 Noshir Tankariwala says, “Much as we owe each and every pioneer a debt of gratitude, they would, in time to come (if not already), be just names and no more. It is to Prochy’s credit and due to her perseverance that the community has been enlightened and made aware of the trials and tribulations that they had to go through before earning glory and fame.”

Sharing what sparked her interest in writing this book, Prochi said, “My grandchildren were going to the only fire temple in Kolkata (Late Ervad D.B. Mehta’s Zoroastrian Anjuman Atash Adaran) with us. In 2015, the newly appointed Head Priest phoned and requested us not to bring my daughter Sanaya’s children to the fire temple. On asking why, I was told that the Trust Deed is sacrosanct. This started my search into the past. The Trust Deed is dated 1915, but no one today has any recall of us Parsis of that time, of the community in Calcutta, and what they fought for and believed in. I try to trace the history of the Parsis, as there is no recorded history of the Parsis in India, except for a poem the Kissa-e-Sanjan written in 1599 by a priest, Boman Kekobad.”

The book weaves through intricate family relationships and gives the deep connect to the two legal cases, which affect our identity with Kolkata. It showcases our community as a modern progressive one, led by Rustumji D. Mehta, son of DB Mehta and Trustee of the D.B. Mehta fire temple.

Says Sam Balsara, “Reading the book has changed my perception of the role Calcutta Parsis played in the history of Parsis in India.”

Many of the pioneer Parsis of Bombay had their early roots in Kolkata. Sir Jamshedji Jeejeebhoy; Nusserwanji Cowasji Petit; Dinshaw Petit; Framji Banaji (brother of Rustumji Banaji); the Wadia family of shipbuilders; Meherwanji Mehta, father of Phirozshaw Mehta; Khurshedji Cama; Dadabhoy Navroji; Jamshedji Madan (father of Indian Cinema); and Dorab Mehta (Meherwanji’s brother), who had done extensive charitable work for the city of Navsari. Then there were the nationally famous Parsis who belonged to Calcutta – DN Wadia, the world famous geologist; Erach Bhiwandiwala, the artist; AC Ardeshir and his famous horse, Ethics; Dr. Irach Taraporewala, who translated the Gathas and wrote the Divine Songs of Zarathusthra; and the two head priests of Kolkata, Dastur Kaikhasru Jamaspjee and Dastur Kaikobad Aderbad Dastur Noshirwan – both highly educated and learned priests and authors of books on our religion.

Prochy N Mehta is a daughter, wife, mother, grandmother, school leader, and topper, and a highly successful sportsperson who represented West Bengal in hockey and basketball, and India in Masters Athletics, with 71 medals at international athletic meets, including 52 gold medals. A recipient of the Ladies Study Group Award for contribution to the field of sport and the Federation of Parsi Anjuman of India Award for Sports, Mehta is also the President of the Athletic Coaches Association of Bengal. She is the first female President of the Calcutta Parsee Club. Her father, the late Rusi B. Gimi, an eminent social worker of Calcutta, was a pioneer in outdoor advertising in India. His company, Selvel, started in 1945, is now synonymous with out-of-home advertising. Mehta is actively involved in the business and is a director in several companies.

Publisher of Anand Bazar Patrika and Telegraph and ABP News Channels, Aveek Sarkar, said, “The book is a valiant effort to academically record a micro history. Books like this are a valuable addition to books on history because it puts on record facts, stories and anecdotes about the Parsi community in Kolkata for posterity.”