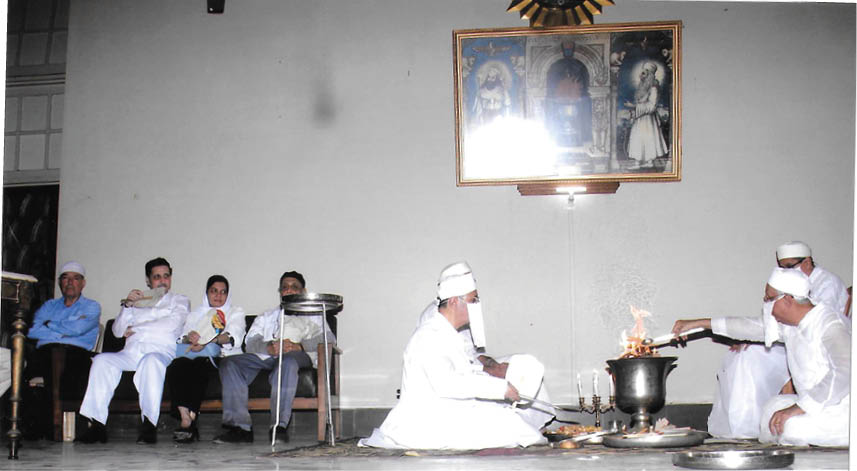 Sazemane Jawanane Zarthoshty celebrated the Jashn-e Sadeh (the glorious event of Birth of Fire) at NM Petit Fasli Atesh Kadeh on 30th January, 2020, graced by Chief Guest, BPP Chairman, Yezdi Desai, accompanied by wife, Anahita Desai. Welcoming the Chief Guests, Hon. Administrator Darayush S. Zainabadi addressed the congregation in Persian, explaining the significance of this ancient festival which is still observed with reverence in Iran, where the day is declared as an optional holiday for Zoroastrians there. Spekaing next, Managing Trustee – Mahnaz F. Zainabadi extolled Yazdi Desai’s commitment and contributions towards the betterment of the Zoroastrian community.

Speaking on the occasion, Chieft Guest Yezdi Desai stressed on the importance of saving up some money for donating towards the Agiaries, and setting the precedent himself, announced a R. 1 lakh donation to the NM Petit Fasli Atesh Kadeh. He praised the Agiary for his divinely powers and also expressed his deep admiration for the humility and philanthropy of the Tatas. As 30th January marked the day when Mahatma Gandhi was assassinated, he requested a two-minute silence in honour of the Father of the Nation. He urged all Parsis and Iranian Zoroastrians to regularly attend the Agiary and be blessed by its potent energy and powers.

Floral tributes were paid to Yazdi and Anahita Desai alongside other dignitaries present and committee members of Sazeman, with the President of Sazeman, Khodayar Attaie felicitating Yezdi Desai and Administrator Zainabadi felicitating Anahita Desai. Other dignitaries who were felicitated include Aban Khodadad Irani of Wibs Bread Company; Dinyar Tirandaz – theatre artist and Beji Vimadalal – caretaker of Fasli Agyari.

The function ended with a thunderous applause for the dignitaries and distribution of Jashan fruits, dry fruits and complimentary cake (sponsored by WIBS Bakery) to all. The Sazeman gratefully acknowledges the kind support of Prof. Dr. Pearl Pastakia, Roshni Irani and Nariman Mody; as also Mahrazban Wadia for entertaining the crowd with his songs; the NM Petit Fasli Atesh Kadeh Trustees for providing the hall gratis; the Iranian Zoroastrian Anjuman for their continuous contribution with special thanks to Khodadad P. Irani , Director – Wibs Bread for free snacks at the function.