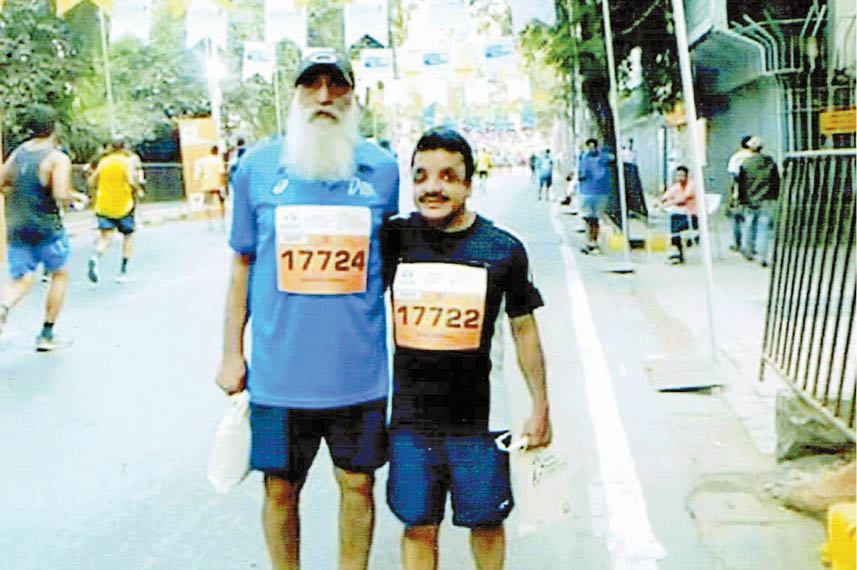 69-year-old Er. Jehangirji Mobedji, who has served for over 50 years as Panthaky of Dadysett Agiary (Fountain) – and his son, Yazad – have been regular participants at the Tata Bombay Marathon. The father-son duo completed the 2020 edition of the marathon, in four hours, reiterating their steely determination towards the sport.

While Jehangirji participated for the very first time in 2007 and 2008 half Marathon, Yazad first ran in the event of 2011. With over 55,000 participants, alongside many septuagenarians, one may ask what is so special in the case of the father-son duo… But then, Yazad is no common person. Born in 1983 with severe complications, he was unable to even stand till the age of 4. Between 1987 and 2000, Yazad underwent a series of major surgeries (including open- heart and neuro surgeries), which enabled him to overcome severe congenital disabilities. Today, he makes a mark as an equal across several fields. In 2016, Yazad met with a road accident resulting in head injuries and a break from all sporting activities for over 6 months. But with time, wounds were healed.

The brave and resilient Mobedjis once again rose above their injuries, returned to active training in 2017 and there’s been no looking back since! While Yazad is keen to better his timings for the next Marathon, for Jehangirji, in keeping with his increasing age, has restricted his effort to the Half Marathon, as opposed to the full race that he has been running, from 2009 to 2019.

So, what is it that keeps the Mobedjis going? The sheer joy of running! Their mantra, in their words, is, “We do not compete, rather we complete!” Kudos to their inspiring achievements and their resilient spirit!