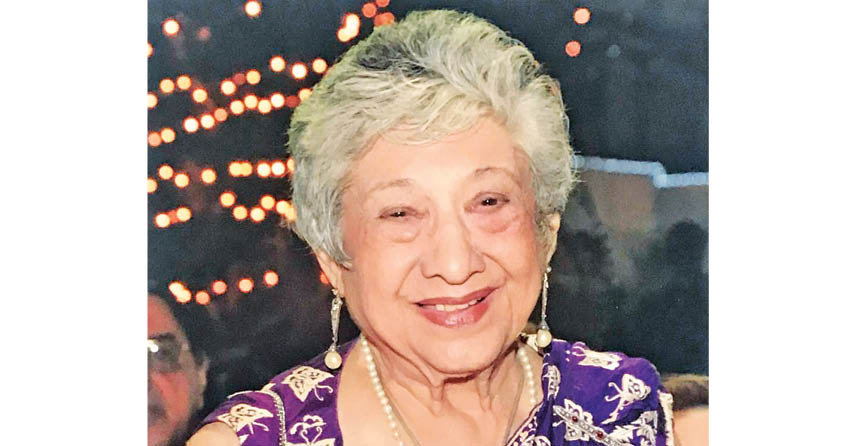 Heroes get remembered, but legends never die… dear Scylla donned her ethereal robes on 17th March, 2020 to progress to the higher realms, where she will for eternity be held in Divine Embrace.

It was 30 years ago in 1990, that Bachi and I were blessed to have met Scylla for the very first time, at a social function at the residence of late Thrity and Homi J H Taleyarkhan, in Mumbai. It was a year when the two of us had just begun to conceptualize setting up a Public Charity Trust that was predominantly intended to support poor Zoroastrians (mainly agrarians) residing in the villages of South Gujarat, who lived in abject poverty. Our meeting up with Scylla was indeed a red letter day in our lives and by extension, also for very many other community members in diverse areas of need.

The World Zoroastrian Organisation Trust became operational in 1991 at which time we depended mainly on the largesse of Scylla. Her response was always laced with alacrity and generosity.

Interacting and working closely with her was an education in itself. It was through our regular meetings and exchange of ideas that we learnt from her example, that the essence of philanthropy was not all about money, but about feeling the pain of others and caring enough for their needs and helping them. The support extended to the WZO Trusts was phenomenal and enormous. In addition to providing regular assistance to poor farmers and replacing huts into cottages, she very generously extended support towards various major projects:

A) The Athornan Mandal – WZO Trust Funds Young Full Time Mobeds Scheme was started due to the donation of Rs.90,00,000 (Rupees ninety lakhs) given by her in 1995-1996. Till the time of writing, 75 Mobeds continue to receive support from the income of the fund.

B) The WZO Trust Funds ‘Self-Employment Scheme’ was conceptualised in association with her; she funded Rs.100,00,000 (Rupees one crore) each for a period of 5 years – 1995 through 1999 – on the condition that amounts by way of ‘interest free financial support’ be extended to Zoroastrians wishing to be gainfully self-employed with repayments being recycled. The result of this initiative has seen 1,156 Zoroastrian individuals, spread over 123 rural and urban locations, receiving supported to start modest businesses and be gainfully self-employed. As of end March 2019, the amount of Rs.500,00,000 has been recycled to Rs.208,611,543 and been instrumental in changing the lives of many.

C) The WZO Trust Funds Bai Maneckbai P B Jeejeebhoy Senior Citizens Centre at Navsari, operational from January 1998, was established due to her vision. The complete expense from purchase of property, construction and fully furnishing the institution was made available through her. The institution has evolved into a leading community centre, where 55 mobile senior citizens reside, spending the evening of their lives in a vibrant atmosphere, free from stress.

D) Many individuals donate their old ancestral houses at Navsari to The WZO Trust Funds. These are demolished and comfortable apartment blocks constructed at nominal rents. From 18 such buildings constructed so far, 7 have been funded from the funds made available by dear Scylla.

E) The Sanatorium at Sanjan is the result of a munificent donation received by the WZO Trust Funds from Scylla of Bai Maneckbai P B Jeejeebhoy Deed of Settlement Fund. The Sanatorium became operational in 2001 and has, over the years, become a popular retreat for community members. It is a a palatial bungalow with comfortable rooms radiating understated elegance, a huge front yard where a beautiful garden, the like of which is rarely seen, is always in full bloom, the backyard has a planned mango orchard, coconut trees growing along the boundary, palm trees and many others all combine in harmony to create an ambience without parallel. The pollution free environment complements the flora and fauna.

Scylla was a visionary who believed that philanthropy lies at the heart of human greatness. Her generosity was the outward expression of her inner attitude of compassion and loving kindness towards economically and physically challenged and elderly human beings in different forms of distress. Being extremely meticulous and forward thinking, Scylla though no longer physically in our midst, had planned well before her passing to the higher realms, the philanthropic work that she started and the legacy she created would continue without hiccups. Her daughter-in-law, Persis, having worked very closely with Scylla over the years during her lifetime, the transition has been smooth, seamless, continuing and effective.

Scylla embodied what Buddha said, “No true spiritual life is possible without a generous heart. Generosity allies itself with an inner feeling of abundance – the feeling that we have enough to share.”

Scylla will always be remembered by the thousands of those whose lives she touched so brilliantly.