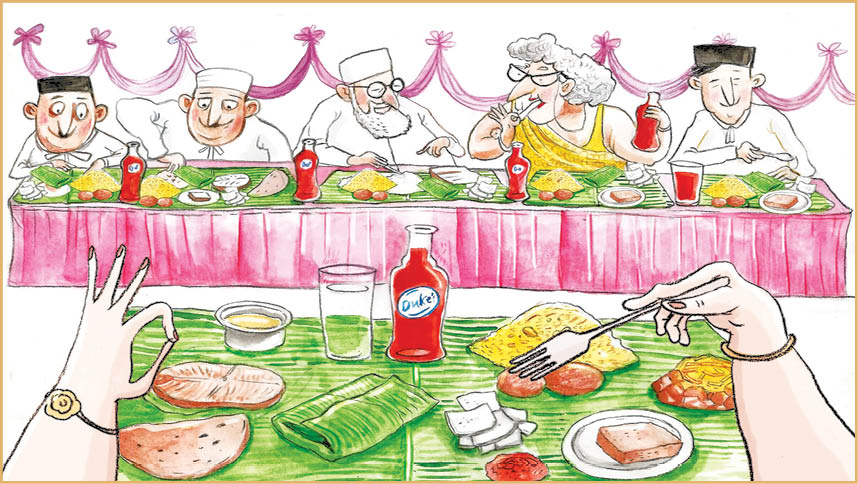 Come September, and one eagerly awaits the ‘lagan’ and ‘navjote’ season… looking droolingly forward to Patra-ni-machhi, chicken farcha, (or their other culinary avatars), a dollop of Bharuchi-akuri, and of course, the inevitable pulao-dar, alongside the other trimmings of a Lagan-nu-patru.

Come February, and we are like – ‘OMG! Not again! Yet another invite and one more banquet of the same fare!’

This is where the Economics Theory, we (supposedly) studied in college, comes into play – ‘The Theory of Diminishing Marginal Utility’! One is so sated by the almost stereo-type fare after months of repeated assaults on our gastric juices, that one no longer looks forward to sitting down with a glass of ginger ale or ‘raspberry’, and tucking in the fare similar to what we had just a few days ago… and have been having since the wedding season began! The marginal utility of the lagan-nu-bhonu has diminished. Take heart, it will be revived again, come September.

If one has lived long enough, one will remember the navjots /weddings attended way back, nearly three quarters of a century ago. A wedding or a navjot was a spiritual affair. It still is, but we view it more as a social get-together. There was a time when the venue would fill up by 5:00 pm for a navjot and by 6:30 pm for a wedding. Ladies in garas and kor-ni-saris, blouses almost to the naval, and very often, the lace sadras flowing out of the blouses. Men in duglis, duglas (a sort of bund gala coat sported by Parsis), pristine white duck trousers (‘duck’ was a glossy white trouser material) and heads covered with pagris, phetas or skull caps.

Strapless/backless dresses, jeans and t-shirts were a strict no-no. Cold drinks were served sometimes accompanied by wafers, rarely anything else. It was a strict prohibition time; there was no liquor. Of course, this did not prevent men from sneaking out and making a beeline for the nearest friendly neighborhood bootleg, for a quickie to stimulate the appetite for the traditional fare of Rotli, achaar, sarias, followed by a generous slab of lagan-nu-custard or a dollop of pumpkin murabba, chicken, fish either in white saas or patra-ni-machchi, eggs on vegetables, sometimes a mutton dish followed by rich pulao-daar; and ending with ice-cream or kulfi and a small cardboard tray with a paan, a sweet or a toffee and few almonds and cashew nuts. Sated, we were homeward bound in a Victoria (a horse drawn carriage).

Today, only a few close relatives attend the navjot ceremony, maybe a few more for the wedding ceremony, as that is traditionally performed after the sunset. It’s fashionable nowadays to come late. Dress code is lax. One often sees more skin than cloth! We Parsis have been known to do everything in moderation and yet, our wedding/navjot banquets are becoming increasingly elaborate and replete with pre-prandial drinks, along with snacks or ‘starters’, as they are popularly known. They come in various forms of chicken/prawn tikkas, chicken liver, chicken in its Chinese  avatar, cheese balls, mushrooms, scrambled eggs on toast, ditto akuri, asparagus in test-tube like containers, sev-puri, and to crown it all pani-puri, but often with pani replaced with vodka or gin! And by the time the age-old announcement, “jhamva chaloji” is made, most of the guests are sated.

Recently, yours sincerely attended weddings and navjotes, where one got the feeling that our community is affected by the ‘Keeping up with Joneses’ syndrome, or rather, trying to overtake the Joneses altogether! The menu that took the cake had an array of dishes that even a glutton would find difficult to keep pace with or do justice to! The usual entrées of rotli, sarias and lagan-nu-achaar was followed by half a tandoori chicken, sali-ma-murghi, patra-n-machchi, fish sauce (saas), savory king prawns, a dolop of murabba, paneer tikka, kid ghosh, Bharuchi akuri, brain cutlet, pulao-daar, a plate of four deserts consisting of something resembling badaam pak, jalebis, lagan-nu-custard and a gulab-jamun, and a generous helping of ice-cream smothered with chocolate sauce! Many were seen taking almost everything on the menu and shamefully, wasting most of it!

This smorgasbord of treats, though impressive, is a colossal waste, which goes against all the tenets of Zoroastrianism. The chicken and fish helpings can well be described in the inimitable style of President Trump as, “Huuge, real Huuuuge.” Hardly anyone can do justice to a meal in such ‘huuuuge’ proportions! This has to change – serve smaller portions, take more later! We are a community of bankers, lawyers, doctors, chartered accountants, clerks, stenos et al; but certainly not pehelwaans and sumo wrestlers!

Maybe, the marginal utility of such a smorgasbord has diminished now that it is March, but it will revive in due course and come September, it will be in full bloom again. Hopefully, there will be  smaller helpings and dishes in moderation. Furthermore………

But let me wish all our PT readers, rather the whole world, for this international festival that the Peshdadian King, Jamshed, established millennia ago – Jamshedi Navroz Mubarak!