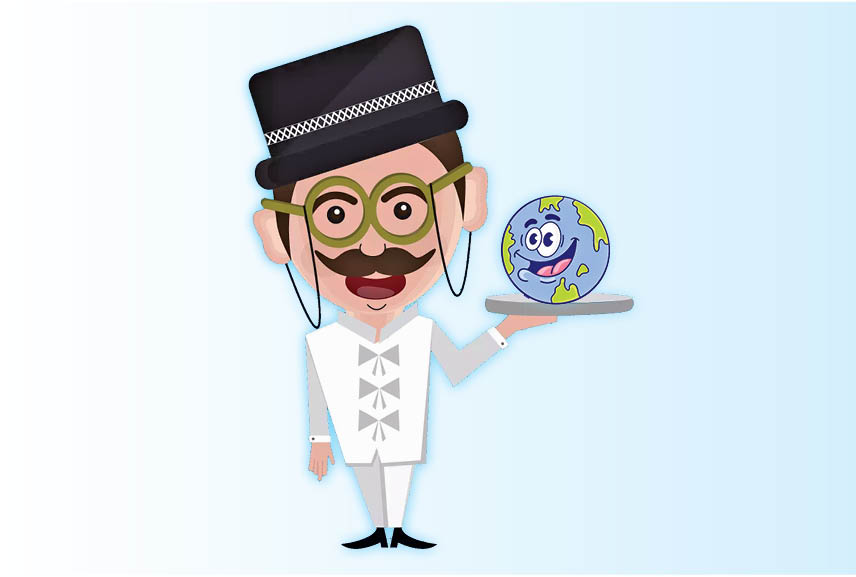 For Parsi Times readers who’ve been wondering where our Meherbai had disappeared to, from their favourite Parsi-newspaper, the mystery finally unfurls… but in the meanwhile…

Abhan Aban thought that Meher aunty had applied too much vanishing cream and vanished! Sagan-No-Gathyo Sorab thought she had become Late i.e. gujri gaya and therefore the ‘Late Meherbai’! Hormusji Homeopath thought the same since he was her doctor and more of his patients were dead than alive, thanks to his home-made sugar-pills!

The truth of the matter was – none of the above! Actually, Meherbai and Meherwanji went on a world-tour, and since they were pretty old and insecure to travel alone, they took along Meherbai’s niece – Farida and her husband – Homi. But there was a major problem of sales-tax. You see, wherever Farida and Homi went, Farida’s boy-friend, Soli-Sample, tagged along, which is why Homi called him Saalo-Soli-Sales-Tax. He was simply unavoidable, just like the tax! Meherwanji called Soli GST and used the choicest galis and insults for him, but Soli had the skin of a rhinoceros. “I’ll come only if my batko boyfriend Soli comes,” declared Farida.

After much contemplation, the five of them left the shores of apri clean and sundar Mumbai to arrive at Cairo, in Egypt. The guide informed, “Tomorrow we see the mummies.”

“No Yummy mummies,” snarled the Guide. “Not alive. Dead mummy!” The mystery was solved the next day and they all marvelled at the Sphinx.

Later, they went shopping and Homi struck a bargain at every shop saying, “Give me a good discount – I know Amitabh Bachchan. He comes to my house every Sunday for dhansak.” You see, someone had told Homi that Hindi films are very popular in Egypt and everybody loves Amitabh. At night, they went to the Blue Nile restaurant to see Fifi Abdou’s  belly dancing. Fifi came to their table and dragged Meherwanji, Homi and Soli to the dance floor. Meherwanji danced like a monkey, Homi jumped up and down and Soli’s big fat stomach danced along with him, and kept dancing for a while even after Soli had stopped dancing!

Next stop was Venice, Italy. All of them insisted on being accommodated in the same Gondola. “We are a close-knit family – any problem?” asked Farida. Gondolier na bawa nu su jaai? As expected, the gondola overturned and all five of them fell into the canal and got their second bath of the day!

Another funny incident took place at the leaning tower of Piza. Stupid Soli thought you get free pizzas here. Meherbai thought it was a public-toilet called the Leaning Tower of ‘Pisa’. In Rome, Soli sample started singing ‘Three Coins In The Fountain’ at the most famous fountain in all Italy! He received some angry stares when he kept insisting on going to ‘Nipples’ the next day – he meant Naples, of course! Once there, Farida also got all romantic and sang, ‘Oh Soli Mio!’ Homi added to the song another line – ‘Muo Soli Kamino!’

Then came Paris and they did the unthinkable – they skipped the Eifel Tower, saying, “We have Rajabai Tower and the Tower of Silence, so what is there to see? How many towers can we see? They went to the Moulin Rouge but skipped the Can-Can show saying, “We have already seen the movie. They also skipped the Art-district of Montmarte, since Soli, the expert, said they had seen Jehangir Art Gallery and the Cymroza gallery and art didn’t excite Farida. French cuisine? No! They preferred Burger King!

Next stop was London. Soli asked the guide in his Surat-Navsari English, “Show us Big Sister!” He meant Big-Ben. They went to a pub and had fish and chips. Khadhri Farida picked-up chips from the next table also as a very old man was too immersed in his scotch to notice! The old man suddenly realised that his chips were missing and asked the waiter, “Where are the chips?” In Farida’s stomach, helped Homi! Farida was furious and bonked Homi on the head with her cheap handbag bought from a foot-path at Bandra’s Hill Road. “Homi got a Liboo!” clapped Soli Sample. (He meant Diboo!) On his way out of the pub, Homi banged his head on the tray the waiter was carrying. “Homi got another Liboo!!” clapped Soli and added, “havey liboo nu jhar matha par ugaro!”

London to New York was a long and tiring journey; so tiring that they skipped seeing the Statue of Liberty – “Gujrat jaisu tyarey tallest Statue in the World joi laisoo,” they reasoned! They also skipped seeing plays on Broadway as their standard in India was only Koila Parsi Nataks on Papeti and Navroz. They had not graduated beyond that! Later, in Los Angeles, they skipped the Philharmonic Orchestra as they preferred the local Nankhatai-Band back home.

Poor Meherbai and Meherwanji wanted to see a lot of cultural events but unfortunately were overruled by Farida and her boyfriend. Poor Homi, of course, did not have much say in the matter because his wife had inherited a lot of wealth from her family and hence, he had to dance to her tunes! They were to proceed to Hong Kong, but due to the coronavirus situation, they went directly to Kuala Lumpur in Malaysia. In the hotel’s coffee-shop, they ordered some tea. Now Meherbai drank her tea very milky and ordered some extra milk. “You mean Susu?” asked the waiter (In Malaysian language, milk is called ‘susu’). “Do I look like Morarji Desai?” asked an exasperated Meherbai! “No ‘susu’, only milk! Marerey mui fuvardi!”  When things were explained to her, Meherbai apologised sheepishly.

The five of them also bought chocolates. “They are called ‘Cocolat’ in Malay,” said Homi. “Stop your kaklat,” retorted Farida, who wanted to buy pure ghee for making charvela eeda back home! Now in Malaysian language, pure ghee is called ‘Asli Lamboo’ – ‘Asli’ meaning ‘pure’ and ‘lamboo’ meaning ‘cow’. Farida at first thought it meant something vulgar, so she changed her mind. Back home, they were so jet-lagged that they slept like new-born babies for the next two days!