At a time when many are lamenting the lack of sports champions in our community, Parsee Gymkhana (PG) ups the ante… in the nation’s most loved and worshipped sport – Cricket! Always striving for growth, honing its skills and growing bigger and better in this sport, PG cricketed yet another first, as they toured another global destination, after the fabulous victory in the UK, last year. Parsi Times Special Sports Correspondent Binaisha M. Surti, an integral part of Team PG through the UAE tour, shares an indepth report.

Parsee Gymkhana’s (PG) fabulous team of bawas have always played top brand of cricket. After a historical and triumphant tour in the UK (August 2019), playing at the iconic Oval in London, Team PG started the new year embarking on yet another exciting cricket journey to the UAE, (20th-28th February), thanks to exceptional efforts by the dynamic Vice President and Cricket Secretary of PG and MCA Apex Council Member, Khodadad Yazdegardi, along with Freddy Sidhwa’s generous hospitality, and the much valued support and encouragement from PG President – Mehli Golvala, Managing and Cricket Committee Members. 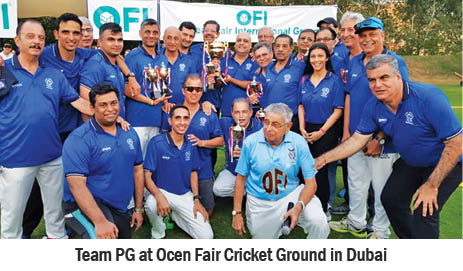 Cricket in the UAE was more than just a game for the senior team of PG. They would be fighting it out on unfamiliar foreign surfaces at Dubai, Abu Dhabi and Sharjah, putting to the ultimate test their temperament, fitness, mental strength and game spirit.

The team kicked off their tour with the first match of the ‘UAE-INDO Solidarity Cup’, on 21st February against OFI Cricket Club, at the Ocean Fair Cricket Ground, Dubai. Seeing the lush green paradise ground in the midst of a desert region was quite amazing. This would be Team PG’s very first time playing on a clay pitch. Brilliantly organised by Freddy Sidhwa and his support staff, the game attracted numerous Parsis, well-wishers and cricket enthusiasts, who turned up in large numbers to support both sides. Batting first, OFI Cricket Club posted 281-5 in 25 overs, as Best Batsman of the game, Shafaqat Ali, top-scored with a 100 off 34 deliveries! Best Bowler – Rustom Shethna scalped one wicket; Farshid Yazdani was brilliant behind the wickets. In reply, PG finished their innings – 166-8 off 25 overs. The talented Man of the Match, Khushal Jilla, played a gutsy knock of 83 (10 fours and 2 sixes), well supported by Khoremand Siganporia (33). They stitched a partnership of a 100 plus runs. OFI CC felicitated Team PG with mementoes. At the post-match presentation ceremony, PG awarded mementoes to umpires Muzaffar Iqbal and Ashfaq Ahmed, Match Referee – Tariq Butt, Commentator – Cyrus Debara, MOM- Shafaqat Ali and Senior Cricketer of UAE – Freddy Sidhwa. PG honoured Freddy Sidhwa and wife, Freny, with a Lifetime Honorary Membership of Parsee Gymkhana, for their generous contributions. 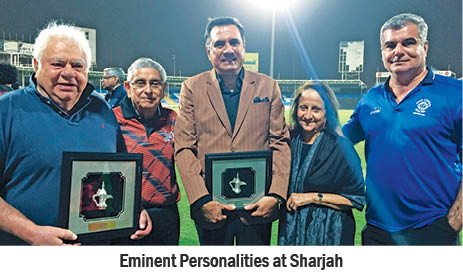 Speaking to Parsi Times, Freddy Sidhwa said, “Inviting PG to the UAE was an honour. I would love our Parsis coming here to play cricket. It’s delightful to see the community gathering for the game. I’m truly honoured to receive PG’s honorary membership – I thank all the committee members on behalf of my family and me – we are touched by this great gesture, and I wish PG all the best in their endeavours.” Former umpire of the Asian Cricket Council, Tariq Butt, added, “Freddy’s passion to promote and support cricket has been impeccable over so many years now. We had been waiting to be a part of this historic event.”

That night most of us visited the famous Burj Khalifa, the tallest existing structure, and were left spellbound by the mesmerising laser and fountain show. In the subsequent days we visited some of the world famous attractions including the famous Global Village where more than 70 countries are represented at this enormous attraction centre; the Desert Safari and a thrilling dune ride in the Land Cruiser; relishing Arabic cuisine alongside live entertainment shows.

We started the 25th of February with a visit to the Grand Mosque in Abu Dhabi, the largest in the UAE. 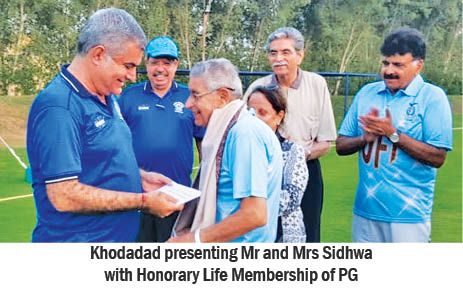 Before PG played its third contest, on the 25th of February, we visited the Grand Mosque in Abu Dhabi, the largest in the UAE. PG would be playing on a concreate pitch for the very first time, under lights,  V/s the home team – Ultimate Sports Academy Super Stars, organised superbly by Sanjiv Kalra – the Academy’s Head of BD, his team and PG’s Pervez Cooper. Actor extraordinaire and our community’s most loved Boman Irani graced the historic occasion. Further, it was an absolute honour for me – Parsi Times Special Sports Correspondent, Binaisha M. Surti, to do the Cricket Commentary, along with the famous and renowned former cricket commentator, and senior lawyer, Fredun De Vitre, in Abu Dhabi.

Batting first, PG scored 129-6 in 20 overs, as Khushal scored 49, Burzin Mehta made 21, and Khoremand contributed an unbeaten 20. The Super Star side chased down their target in 13.2 overs as Man of the Match, Favas, remained not out on 47. Maneck Daruwala scalped 2 wickets while Rustom Shethna and Mehernosh Chhor were instrumental in running out Jamsheer. A flurry of awards were presented to all the dignitaries – Boman Irani, Freddy Sidhwa, Khodadad Yazdegardi, Fredun De Vitre, skipper Pervez Cooper, Sanjiv Kalra and compere cum commentator for the match – Sandeep Menon. As PG celebrated its 135th birth anniversary, a memento was also presented to the Club on behalf of Ultimate Sports Academy, Abu Dhabi. Khushal bagged the ‘Best Batsman’ and ‘Best Fielder’, Yogesh won ‘Best Bowler’ and Rustom won the ‘Best Catch’ award. Both teams were awarded medals and trophies.

PG also awarded Sanjiv Kalra, Anant Kumar, Abhay Singh, Dondon, Anish Mohammed and Midhun Sudhakar. The Parsi team played their final match V/s ‘G Force 40’, at the Sharjah International Cricket Stadium which holds the Guinness World Records for the most One Day International cricket matches hosted at one venue. Electing to bat, the G Force 40 side amassed 190 in 20 overs, as Rizwan top scored with 50. PG managed to score 102-7 in 20 overs, with Khushal scoring 25 and Khoremand contributing 17. Special mention must be awarded to senior pro from Dubai – Freddy Sidhwa for his excellent bowling line and length, flighting the ball and foxing the batsmen to judge his deliveries.

Cricket’s living legend, Farokh Engineer, graced the event and also umpired for a bit of the game. Speaking to Parsi Times at Sharjah, he said “It is absolutely fantastic and a huge honour to be here with Team PG. All this has been possible due to Freddy Sidhwa’s great initiative and passion for the game. The boys have got a great opportunity to play at this venue. We are all proud to be Parsis and are here to celebrate cricket and our traditions, which fosters our togetherness.”

Boman Irani concluded, “It feels very special to be in Sharjah. I’m back here with my beloved Parsi team. It’s been lovely to see their camaraderie and their enjoyment of the game. It’s great to see Freddy Sidhwa play phenomenal cricket at his age. Having Farokh Engineer here with us made it even more special! I feel privileged to be standing here with all these wonderful people and I’m really enjoying myself!”

Our final day in Dubai ended with a magnificent farewell dinner, courtesy Freddy and Freny Sidhwa.