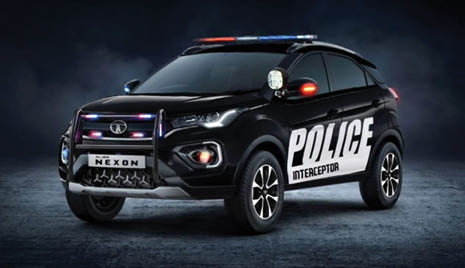 While the traffic police in India usually travels in Maruti Ertigas or Toyota Innovas, the Tata Nexon could now, also be an ideal alternative, in keeping with its facelift modifications which render it to soon be one of the leading ‘Police Interceptor’ vehicles!

Being the very first, made-in-India car to achieve an excellent 5-star rating for adult safety in the Global NCAP, the Tata Nexon is considered one of the safest cars in the country. Thanks to its high safety level, impressive feature list and attractive design, the Nexon is also one of the most popular SUVs in India today. The Tata Nexon received a mid-life facelift at the beginning of 2020, with a redesigned front end, several new features and a BS6 compliant engine.

In a video sharing the transformation digitally, the paint scheme of the Tata Nexon is altered, from Olive Green with a white roof to Black, which is usually used as the colour for Police cars, with ‘Police Interceptor’ written on its doors. The front of the SUV gets a new bull bar, offering extra protection. New small red-blue LED lights have also been placed on the bull bar. Further, a small LED floodlight has been integrated with the wing mirror. A red-white-and-blue beacon has been mounted to the top of the car. At the end of the video, the rendered car also gets a white scheme option.

The Tata Nexon has now been upgraded to become BSVI-compliant. The SUV receives its power from a 1.2-litre 3-cyl turbo gasoline burner and a 1.5-litre oil unit. While the former can generate 120 PS against 170 Nm, the latter can deliver 110 PS against 260 Nm. Both motors are mated to a 6-speed MT/AMT. The SUV is now also available with a pure electric motor, which is offered in the top-spec variant. The Tata Nexon is equipped with a wide range of features which include automatic headlights with LED DRLs, an electric sunroof, a flat-bottom steering wheel, a 7-inch touchscreen system which supports Android Auto and Apple CarPlay, iRA connected car technology, a digital instrument cluster, automatic climate control and cruise control. The Tata Nexon is priced from INR 6.95 lakh to INR 12.7 lakh (ex-showroom). It competes against the Maruti Vitara Brezza, Mahindra XUV300, Ford EcoSport and Hyundai Venue in the highly teeming compact SUV segment in India.