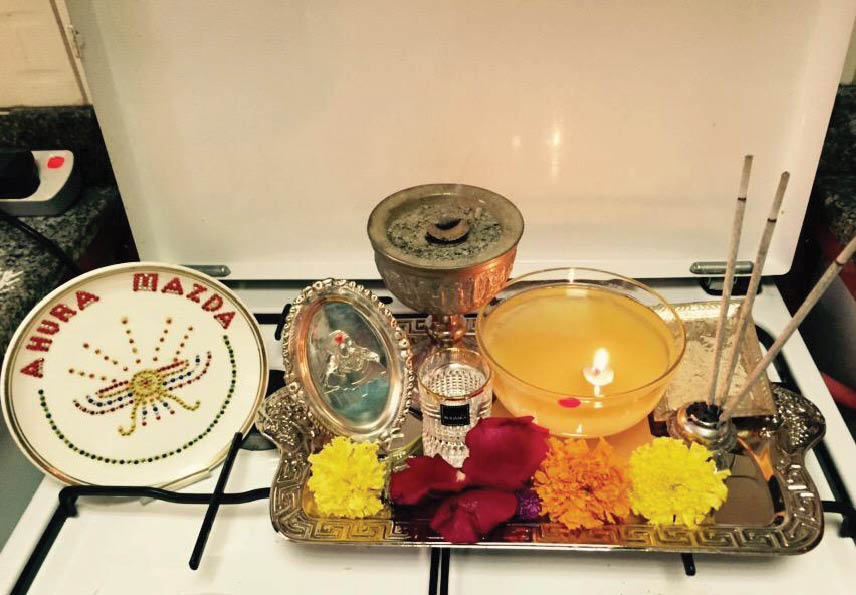 The Holy month of Adar will soon end and the Holy month of Dae will commence. Many devout Zoroastrians are disappointed because they could not pray before Iranshah in Udwada or even at their neighbourhood Agyari or Atash Bahram during the month of Adar, which is dedicated to the divinity that presides over fire. However, despite the Lockdown, one can always ‘Lock-up’ with divinity from home, after lighting a diva (oil lamp) and connect through the medium of fire.

Praying Before The Hearth Fire: The concept of having a hearth fire or a simple diva at home, is a ritual of dispelling darkness and negative forces, with the physical presence of a natural source of warmth, light and energy. When praying before the hearth fire, we address the fire as Atash Dadgah (or fire installed in its lawful place of adulation). 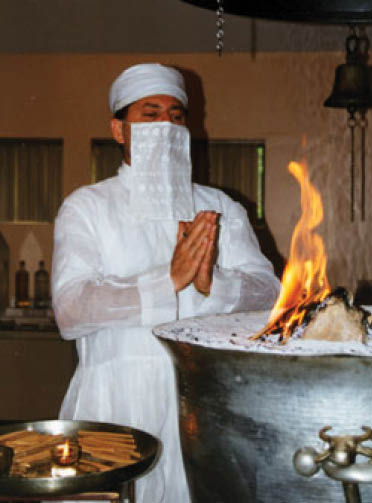 The Persian Revayet recommends that we pray five Yatha while lighting a diva. Yatha is the chant (Ahunavar or equivalent of the Sanskrit Om) with which Ahura Mazda created the universe. Thus, Yatha is a very positive, creative, life-giving and health-giving chant, which gains even more relevance during the current pandemic.

While reciting the Sarosh Baj (Sarosh Yazata is the guardian of all souls – living and dead), we pray five Yatha, just as we do while lighting a diva; it probably links with enlightening or enhancing our five senses or our consciousness. Thus, praying five Yatha while lighting a diva is also a ritual act of attuning our spirit with the Creator, while chanting the manthra with which the Creator created this universe and fire, representing the energy with which the universe is animated and energized.

Fire As A Channel Of Worship: When a Zoroastrian prays before fire, be it at home or a place of worship, he/she in essence, offers worship to Ahura Mazda through Fire. He/she sees light amidst darkness which could be clouding his/her mind. The devotee attunes with Adar, the energy that gives life and animates this world and also feels the positive and healing energy of Ardibehesht or Truth and Righteousness. In other words, through fire, the devotee sees and senses all that is good and God-given and in gratitude, offers prayers, good wishes, positive thoughts and affirmations for this universe, to the very Creator of this universe, through fire as a medium or channel.

The Healing Power Of Ardibehesht: Atash or fire also embodies the healing energy of Ardibehesht. Thus, the presence of the hearth fire embodies the presence of good health at home. At an ethical level, Ardibehesht is the embodiment of God’s Truth and in our religion, truth is considered the highest virtue. It is only through truth and righteousness that Ahura Mazda’s friendship can be attained.

The Ardibehesht Yasht: is one of the best prayers for healing all kinds of physical ailments. There is also an old healing tradition of Ardibehesht ni Picchi, where a priest or even a lay person, after a bath and performing the farazyat (obligatory) prayers, recites the Ardibehesht Yasht, running a clean white handkerchief or a clean muslin cloth, from head to toe of the ailing person. It is a tried and tested Zoroastrian form of healing with a high degree of success.

Which means: “I like him (i.e. Ardibehesht); when I like Ardibehesht, then (he) of (all) other Ameshāspands (becomes) a helper, whom (the Creator) Ahura Mazda nourishes with good thoughts, and good words, and good actions. The Garothmān (Paradise) is Ahura Mazda’s own abode. The Garothmān (Paradise) is for righteous persons.” The essence of this verse is that only a righteous person can be in the abode or presence of Ahura Mazda. 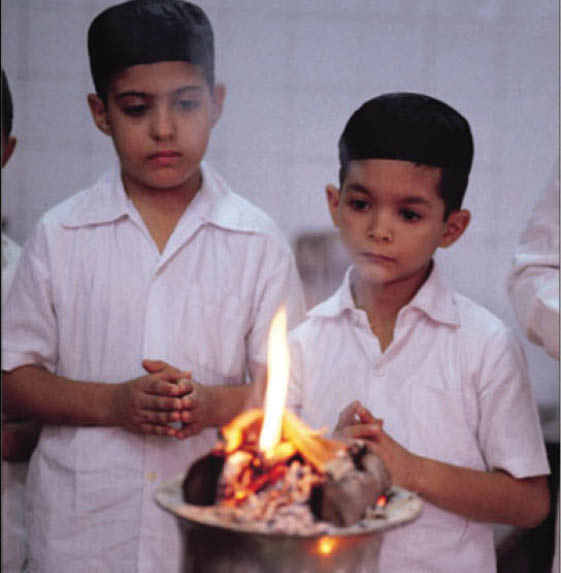 The Yasht affirms that the “best among healers is the one who heals reciting the mānthra”.

Which means: “The Creator, the keeper of the world, (is) omnipotent and omniscient, and the Nourisher of all, and the producer, and the Doer of meritorious deeds and overseer. Ahriman is nothing whatsoever (and is) ignorant and cannot do anything. Hormazd (is) the Creator (and) Ahriman the destroyer. The Creator (is) Holy and Ahriman (is) wicked. May Ahriman perish, may Ahriman be far away, may Ahriman be vanished, may Ahriman be defeated and may Ahriman be overcome. The foremost Religion (is the) pure Zoroastrian (Religion); Hormazd (is) Exalted, Powerful, Good (and) the Increaser.”

Airyaman Isho: The Ardibehesht Yasht also refers to the prayer of Airyaman Isho, which is actually Yasna 54. It is a very efficacious and powerful prayer and it should be prayed just before the chanting of Ardibehest Yasht.

Airyaman Yazad is a co-worker of Ardibehesht Ameshaspand and therefore, it is considered very meritorious and beneficial to recite this manthra before the Ardibehesht Yasht. Yasna 54.1 is recited 4 times. It has the power to drive away diseases, physical, mental as well as spiritual. Part of it is composed in the Gathic dialect and it is affirmed that this specific Yasna 54 will be recited at the time of the future restoration of the world.

Homage To Dae Dadaar: The month of Adar will end early next week and the month of Dae will commence. It is dedicated to the supreme Amesha Spenta, Dadaar Hormazd – The Creator – Dae Dadaar. It is a month of thanksgiving to the creator and gratitude is ritually expressed by performing Jashan ceremonies, either at home, at the office or at an Atash Behram or Agiary.

This year it may not be possible to perform Jashan ceremonies either at home or at the office. However, the true essence of celebrating the month of Dae lies in offering service to those in need. It is said that in ancient time, when Zoroastrianism was the state religion of Iran, on Roj Hormazd of Mah Dae, the great kings of yore used to descend from their throne, dress in simple white garbs, suspend for the day the duties of all royal attendants and make themselves available to any common citizen who wanted to interact with the king. They would hold meetings with small landowners and farmers – even share simple meals with them. This tradition was an annual reminder that to the Supreme Divinity, Dadaar Hormuzd, king or commoner are both equal!

Our Beloved Friend: The month of Dae also commemorates our friendship with Ahura Mazda and all His creations – particularly friendship among human beings, rich or poor, royal or commoner. In the Zoroastrian tradition and particularly in the Gatha, the Supreme Divinity is referred to as ‘Friya’ (Sanskrit Priya) which means friend or beloved.

Hence, a Zoroastrian’s relationship with God is built not on the basis of awe or fear but of friendship and love. God is to be loved not feared for his wrath. God is to be considered as a friend and not as a demanding or domineering Lord who constantly put’s his subjects to tests and sacrifices. A true Zoroastrian would never see any disaster as an ‘Act of God’. Ahura Mazda is a loving friend and not the author of this pandemic.

In the Zoroastrian tradition, God is not to be pleased with sacrifices or fasts. In fact, as a ‘friend’, Ahura Mazda wants all His friends to enjoy Ushta or happiness. In the Zoroastrian calendar of 365 days, there is not a single day set aside for fasting – all that Ahura Mazda wants His friends to fast from, is from doing wrong, in thought, word and deed.

From this, one can see that we can earn God’s eternal friendship simply by walking on the path of Asha (righteousness). Therefore, in the holy month of Dae, may each one of us endeavor to earn Ahura Mazda’s friendship through our daily endeavor to walk on the path of Asha. For indeed, the Colophon to Yasna asserts: “There is but one path, that of Asha. All other paths are false”.

The lockdown will end sooner or later. Hence, do not despair; instead, avail Lockdown time to lockup with Divinity from home!