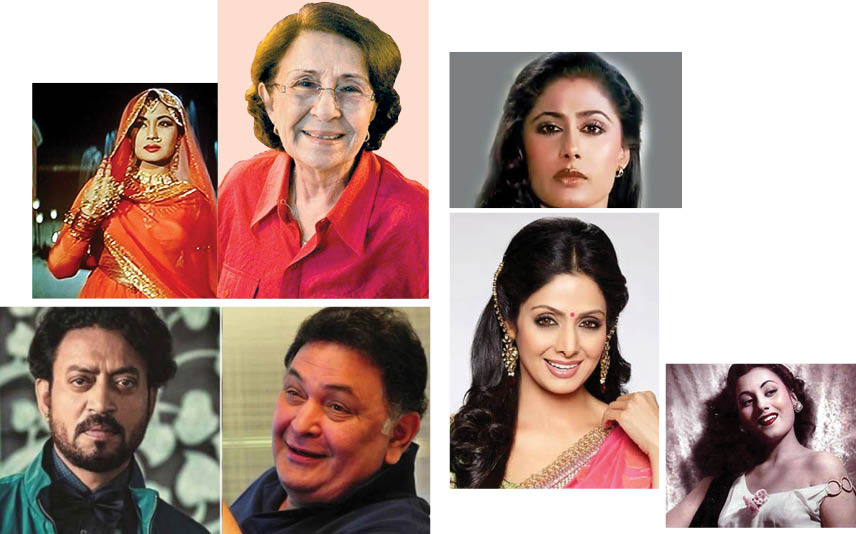 Film stars are larger than life and live life King-size. However imperfect their lives may be, they inspire awe, passion, frenzy and a huge fan-following during their lifespan. But in death, they zoom to iconic positions, thanks to their fans taking an added interest in their body of work. Radio-stations, TV, newspapers, magazines share lesser known facts of their lives – good, bad and sad, resurrecting them to the status of sainthood and giving them cultural immortality, thanks to our media which has the so-called  ‘Breaking News’ on an hourly basis!

A fortnight ago, we lost two of our most talented twinkle-twinkle-mega stars on two consecutive days – Irfan Khan and Rishi Kapoor. I had met them both at social as well as media gatherings. When I look back, I realize so many similarities as well as disparities between them – both were modest, no showing off, no star tantrums and very down to earth. Both were punctual at functions. Both loved to talk and tell stories – both, on the record as well as off it. Rishi hated the word ‘interview’ – he would say, “Ruby aunty, let’s chat!” whereas Irfan was more guarded with his words.

Both had a great sense of humour and a hearty laugh. They loved their wives and kids and though Rishi was open to sharing family photos, Irfan was more private. If Rishi was the national heart-throb, Irfan achieved international fame when Mira Nair spotted him at a theatre-workshop and cast him on the spot in Salam Bombay. After that, there was no looking back. He got some of the best Hollywood-crossover films like Jurassic Park, Life Of Pi, Namesake and several others. Physically, Irfan was tall and slim whereas Rishi was a bit short for a hero, plump, and with small, naughty eyes that crinkled when he laughed.

Both were good human beings – we never heard any scandal or gossip about them. However, I found Rishi more polished and refined in his manners – Kapoor upbringing I suppose! Rishi always stood up when a lady left the table, pulled a chair and opened doors for ladies – always chivalrous. Mind you, this wasn’t for his public image or just in public – he was naturally good mannered.

Earlier this week, the English as well as the Gujarati Theatre world has lost one of its most revered and veteran actors – Ruby Patel. She was an exceptional talent, a very spontaneous artist since on stage, where, unlike films, there are no retakes. I had met Ruby in the early seventies at a PTA held at Fort Convent School as our daughters went to the same school, where we exchanged smiles – me knowing she was a celebrity and she, politely responding to a fellow-parent! Later, during the late seventies, I had gone back-stage to congratulate her performance and she thanked me with her warm and big, jalebi-smile! In the mid-eightees, at Dubai Airport, there she was, pretty as ever, both of us busy shopping. Before I could chat her up, our respective husbands came and I missed the chance. RIP Ruby! You were the most stylish lady on stage with a perfect sense of timing! Along with you, an entire era of theatre has passed away!

Meena Kumari died a lonely death in 1972, on an anonymous hospital bed at the age of 38, after a prolonged battle with liver-cancer. Her countless fans flocked to theatres like bees to a hive to watch Pakeezah, her last movie. Madhubala, the Venus of Bollywood, according to the TIME magazine, passed away at the age of 36 due to a chronic heart ailment. She rose to dizzying heights in the 1950’s with big box-office hits like Chalti Ka Naam Gaadi; Kala Pani; Mr. & Mrs. 55; Mahal; and of course, Mughal-E- Azam. Geeta Bali died in January 1965 following a brief and sudden illness; her husband, Shammi Kapoor was away in Kulu-Manali shooting for Teesri Manzil and had to rush back. Sridevi seemed to have it all – a loving husband, two lovely daughters, the best of films, name, fame and wealth. The only thing lacking was the number of days on earth to enjoy these!

Smita Patil was a stage actress. I’d seen and reviewed her Marathi-play at the NCPA. At another play, we were introduced and she thanked me for a ‘good review’. I answered, “I only give fair reviews – you deserved it!” We met briefly over tea and chutney sandwiches at the NCPA and then lost touch. A year later, we bumped into each other at Worli’s Door Darshan TV station where she was a news-reader and I was doing the TV show – ‘You And The Law’, with late advocate, K C Vajifdar. We chatted again over tea and sandwiches. I called her my favourite Marathi Mulgi and she called me a ‘sweet Parsi aunty’.

Their passing away makes us think of the futility of name, fame and wealth. Also, film-stars become larger in death than in life because death gives them the supreme gift of mystique! Unfortunately, their death also becomes fodder for an unethical media who intrude on their families, while they grieve. This is because when larger than life legends die, there’s an added, feverish curiosity in fans to know more and more! They may be gone, but they will not be forgotten… just like the stars of yesteryears… even today, we talk of Elvis Presley, Rock Hudson, Marylyn Monroe and other Hollywood stars of the 40’s and 50’s with nostalgia!