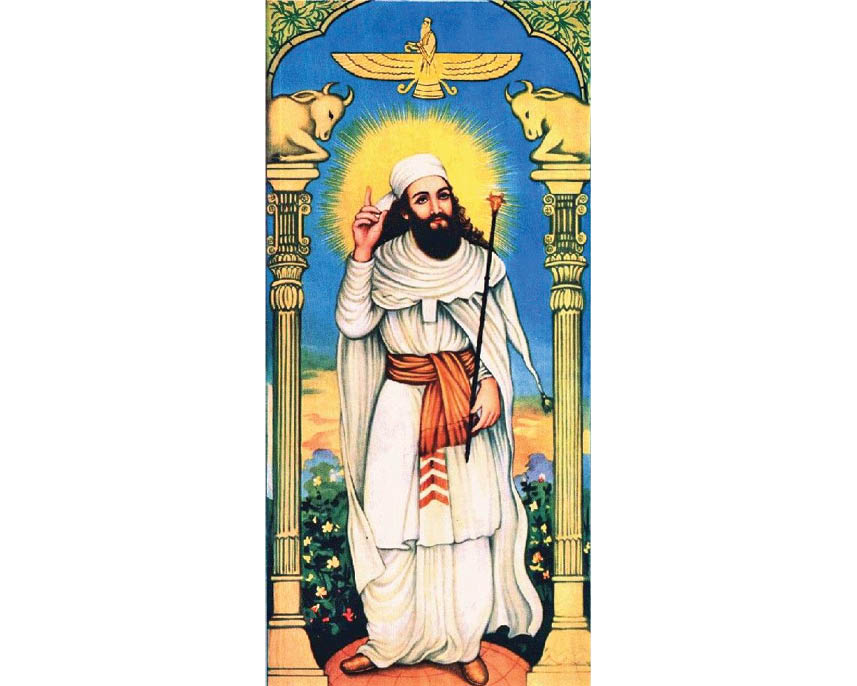 Roj Khorshed of Mah Dae is observed as Zarthosht no Deeso – the day on which our beloved Prophet, Zarathushtra, passed away from this material world to the spiritual world. Zarathushtra’s era is shrouded in mystery. While Greek sources place his birth as far back as 6,000 to 7,000 BC, modern scholars place his birth around 1,500 to 1,800 BC. Some claim he was born in Balkh (Bactria), while others claim he was born closer to the Russian Steppes. Traditionally, we believe Zarathushtra was born during the Kayan dynasty, when saintly King Lohrasp ruled over Iran. The Kayan dynasty is considered a pre-historic period by scholars; no archeological material of this period appears to have been excavated yet. However, despite the antiquity and the shroud of historical uncertainties covering Zarathushtra’s era, what emerges is the strength and eternal relevance of Zarathustra’s teachings – which leading scholars claim, have influenced three other religions – Judaism, Christianity and Islam.

Shining Golden Star: Asho Zarathushtra is regarded as the First Prophet or the first to receive Ahura Mazda’s message. The Persian term for prophet is Paigambar or Wakshur (derived from the Pahlavi word, Wakshwar meaning, ‘one who carries the Word of God’). The Avestan term for Prophet is Manthrano or ‘one with the tongue of the manthra (Holy Word)’ or ‘one who brings the Holy Word from God’. In the Pahlavi tradition, Asho Zarathushtra is recognized as a Yazata – a Divine Being with a Khshnuman (dedicatory formula) in his honour.

Asho Zarathushtra belonged to the family of Spitama (meaning very holy), with father – Pourushasp, mother – Dogdo, paternal grandfather – Peterasp and maternal grandfather – Framirava. His lineage goes back to Shah Faridoon, a saintly King of Peshdadian Iran, the one who reined in the evil Zohak.

Scholars have interpreted the name Zarathushtra in many ways, from ‘golden camel’ to ‘driver of camels’. The interpretation we like best is ‘Zara’ (golden), ‘Ush’ (to shine) ‘stra’ (star) or the Shining Golden Star.

Early Childhood: The life and miracles associated with Asho Zarathushtra’s birth are narrated in a Pahlavi work known as ‘Zarathosht Nama’. In Pahlavi texts, Zarathushtra is called ‘Zarathosht’ or ‘Zarthosht’. He is said to have laughed, instead of cried at birth. It was seen as a sign of his divinity or the fact that at birth, he was neither confused nor scared. As many as seven attempts were made on the life of this child.

The evil Durasrun first tried to stab the Holy Child. But, instead, his arm got twisted backward. When baby Zarathushtra was thrown to the flames, the hot coal turned into a bed of roses. When put in the path of a herd of cattle and horses, a cow and a mare respectively stood over this child to protect him from harm. When thrown into a den of hungry wolves, the animals found their jaws sealed. Attempts to poison him and throw an evil spell also failed.

In Search Of The Truth: Asho Zarathushtra remained engrossed in prayers from the age of fifteen to thirty years. He left his father’s home at the age of thirty in search of the Truth. According to the Dadestan-i-denig, Asho Zarathushtra had the first vision of Ahura Mazda on Roj Dae-pa Meher of Mah Ardibehest. His first question to Ahura Mazda was ‘Who is the best man among all people in this world?’ In Ahura Mazda’s response to this very first query, one finds a summary of the Zoroastrian way of living. Ahura Mazda is believed to have said, “The best man among all people in this world is one who walks the right path of truth (the path of Asha), one who is charitable, one who is just, reveres fire, reveres the waters and is kind to animals”. Asho Zarathushtra is said to have received the Revelation for ten years and all the mysteries and secrets of the universe were revealed to him by Ahura Mazda who Zarathushtra beheld as the embodiment of Divine Wisdom.

Bahman Ameshaspand urged that human beings should be kind to animals.

Shehrevar Ameshaspand admonished that metals and minerals should be used wisely.

Khordad Ameshaspand wanted the waters to be revered.

Amardad Ameshaspand desired that the plant kingdom should be cared for.

In the message of the Amesha Spenta, we find the concept of what we recognize today as striking the ecological balance and living in harmony with Nature. Think about it, issues so relevant to us today were addressed by Asho Zarathushtra thousands of years ago in pre-historic times!

Divine Gifts: According to the Sharestan, Zarathushtra received from Ahura Mazda the following gifts:

The Gatha: Zarathushtra’s teachings are essentially embodied in the five Gatha which form seventeen of the seventy-two chapters of the Yasna (Ijeshne). These are as follows:

Yasna 55.2 asserts, “The Gatha are the lord of our soul, protectors and providers of spiritual food and clothing.” In other words, these divine songs (Gatha means song) embody food for our soul.

Freedom To Choose: Asho Zarathushtra essentially saw life as a struggle between the forces of good and evil and felt that human beings have the freedom to choose between what is right and what is wrong and take moral responsibility for the choices made. It is every human being’s duty to be a spiritual warrior (Rathestrar) and battle evil at the physical, social and ethical level. At the Physical level, all forms of impurity and pollution are seen as a manifestation of evil. A good Zoroastrian, therefore, always strives for purity and cleanliness at home or at work. At the Social level, all forms of poverty, want, human suffering and ignorance are seen as an affliction of evil. These evils can be overcome with acts of charity and giving. At an Ethical level, every good Zoroastrian must guard himself/herself against vices of wrath, greed, envy, etc.

Asho Zarathushtra’s key message is of happiness. We pray in the Ushtavaiti Gatha, “Ushta ahmai yahmai ushta Kahmai chit.” (Happiness be unto him through whom happiness is caused to another). In other words, the road to happiness is paved with the happiness we bring or share with others.

Path Of Asha: If one were to sum up Asho Zarathushtra’s teachings in just one word, it would be Asha. At its most simplistic level, Asha stands for Truth (as opposed to falsehood). It also stands for righteous conduct. At a more universal level, it stands for Divine Order (and man’s duty to live in harmony with that Order). It also stands for purity (in thought, word and deed).

The colophon to the Yasna asserts, ‘Aevo pantao yo Ashahe, Vispe anyaesham apantam’ (There is but one path, that of Asha. All other paths are false). In the Hoshbam we pray, ‘Through the best Asha, through the highest Asha, may we catch sight of Thee (Ahura Mazda), may we approach Thee, may we be in perfect union with Thee.’

Zarathushtra’s Transition: According to legend, when Zarathushtra was seventy-seven years old and praying at a fire-temple, he was stabbed by an evil Turanian (Turan was a sworn enemy of Iran) by the name Turbaratur. However, at the same time, Zarathushtra threw his prayer beads at Turbaratur and destroyed him. Mystics have interpreted this legend as a parable with deeper esoteric meaning. They believe that Turbaratur was a cloud of accumulated negative energy – a dark manifestation of the evil thoughts, words and deeds collectively generated over the ages. Only a Prophet of Zarathustra’s spiritual powers could have attempted to and taken the impact of destroying this cloud of negative energy. In a sense, like Jesus Christ, Zarathushtra is believed to have sacrificed his own life to save humanity from being destroyed by this negative force of evil called Turbaratur.

Zarthosht No Deeso: is the day marked to commemorate the passing away of that timeless Divine Messenger who gave a message embodying the principles of truth, righteous conduct, ecological balance and above all else, happiness for all. All this was espoused in an era which historians would call pre-historic and yet, today or a thousand years from now, the message remains ever refreshing and relevant, for the principles he established are timeless.

Zarathushtra is not among us physically but he lives in our hearts and our collective consciousness. We do not mourn his passing, rather we celebrate what he passed on to us. What a thinker he was for his time! What a profound message of Asha or Truth he taught… Happiness to him who makes others happy; about sharing, about giving and about caring, in thought, word and deed.

Instead of circulating pictures of Zarathushtra (no one really knows what he looked like) and forwarding worn-out messages on email and WhatsApp that have been recycled to death since the last several years, live his words, live his message and that’s regardless whether we open the seeso or not. Opening the seeso is optional. However, before going to bed, do ask yourself (today and everyday), how many did I make happy today and how many more will I make happier tomorrow? This will be living Zarathushtra’s message and truly celebrating the life of our great Prophet and that of your own!