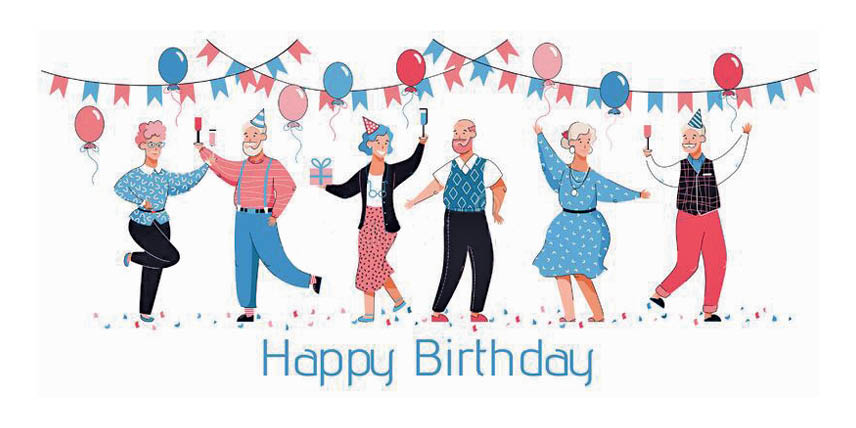 Soli Sales-Tax had invited himself to every Birthday party in town, but never given one since he was a kanjoos-makhhichoos! It was his birthday next week, so he requested girl-friend Farida, saying, “Farida, my richie-rich darling, what will you do with your inherited new money? You can’t take it with you, so why not spend it?”

Farida: Spend it on what?

Soli Sales-Tax: On me! Give me a nice birthday party – one that people can’t forget!

Hormusji: Nakhod gayo, with one foot in the grave he wants a party!

Farida: Chup Homla! If my Sola wants a party, he’ll have one. I’ll order the best of the best things for him.

Saying that, she proceeded to order crates of cold-drinks, boneless chicken-tikka biryani, marghi-na-farcha and a huge chocolate cake. She then sent out online invitations to all close friends and members of Meherbai’s Mandli and everyone looked forward to khani-pini and masti-majah at Farida’s third-floor, spacious flat at Rustom Baug.

Mindhi Mani and her husband Minoo Makori arrived first with a theli of limboos as a birthday gift!

Minoo: Please return the theli as I need it for my daily bazaar.

Soli wanted to take aim and hit the limboos one by one on Minoo’s head but Farida had asked  him to ‘behave’ like a good boy, so he said. “Thank you so much for your kindly kindness. No one has ever given me such a thoughtful and practical gift in my life – so much Vitamin C!”

Kunjoos Kerbad arrived next with a huge gift-wrapped box saying, “Open it! Open it! It’s the most precious gift of life!”

Soli opened it and it was empty (just like his skull) – nothing inside!

Kunjoos Kerbad: There’s air inside! Air is the most precious gift in life and for you, only the best will do, so I have brought air all the way from the States. Please return the gift-wrap silver-paper so I can use it for another birthday gift!

Amy Atom Bomb arrived next and presented Soli with a packet of huge safety-pins, saying, “Your pants are always slipping down, so you will find them very useful!”

Tehmi Trim-Tarak: You are always hungry! Look at your big fat abdomen! Like a pani-nu-matlu! And your stupid huge moustache!

Keki: That’s a beer-belly, and don’t worry, you are not likely to come in contact with either my belly or my moustache because you are not my type! You are a sukki-boomli! I like my women well-stacked, like my fridge!

Soli: What birthday present have you brought for me?

Keki: I brought myself and my healthy appetite!

An hour had passed but there was no sign of cold-drinks, food or cake. So Farida said, “First, let’s sing Happy Birthday to aapro janito aney manito Soli!

Keki Khadhro: But where’s the cake? We have to sing around the cake, no?

Farida: Cake is coming – mohnu samarva. Just now we all sing without the cake.

Everyone sang Happy Birthday totally out of tune in their respective besura voices – all the Rustom Baug crows simultaneously flew away.

Once more, once more karta, everybody was exhausted and without a drop of water!

Lily the Silly: Now we give birthday-bumps to Soli!

Sugatri Sooni: Marerey! Your pillows are full of bed-bugs! Let’s pass something else around – let’s pass Hormusji around!

So they all pushed  thinny-skinny-fook-marey-toh-oodi-jai-teva  Hormusji, who became totally disoriented and fainted from being pushed from one woman to another. He was soon revived by Farida with the smell of a sapaat. She was now clearly worried as the biryani and cake had not yet come. But she kept up a brave face.

Another hour passed and everybody was totally exhausted and ready to fall down but still no biryani-nu-tapelu or the birthday cake!!

Under duress, everyone sang not once, not twice but countless times!

Farida: Baji Bun-Pao – you sang in the wrong note. Sing it again. Bomi Brun-Pao, you went off-key, sing five times till you get it right! Shapur, don’t sing like a Soprano – you are a man – sing in Baritone!

Another hour passed but no food or cake! Suddenly, the doorbell rang and everybody clapped, saying ‘Bhonu Ayoo, Bhonu Ayoo’! It was Abdul from the Sultan Biryani House at Bhindi-Bazar. He refunded the money explaining that there was problem in his locality and the cooks had not come. Everyone was disappointed and restless but then another doorbell rang and everyone ran like they had come from a famine area, shouting ‘Cake Aayoo, Cake Aayoo’, but it was Patrick D’Costa from the ‘Bhoosa Cake and Patiserie Shop’, saying “Farida madam, your Chocolate Sawdust Cake never arrived. It’s lock-down time, so no cake – only refund! Here, take half your money, half I am keeping as tip!

Everyone’s face fell to the ground and the men became whiter than the white shirts they were wearing!

Farida: The party’s over.

Soli, the eternal Idiot: Thanks so much for singing for me – sing once more before you go!

Kharshedji Khachchar: Never seen such a sufyani party in my whole life!

Mehroo Maxfactor: Nor are you likely to see one like this! Marerey, I sang Happy Birthday till all my make-up melted!

Abbhan Aban: Even my throat sat down!

Due to social-distancing, there were no kissi-kotis but only namastey. All the guests went home and made charvela eeda, cursing Farida Fui and her Birthday-lover-boy Soli Sales-Tax, after the Dharam-na-Dhakela party!