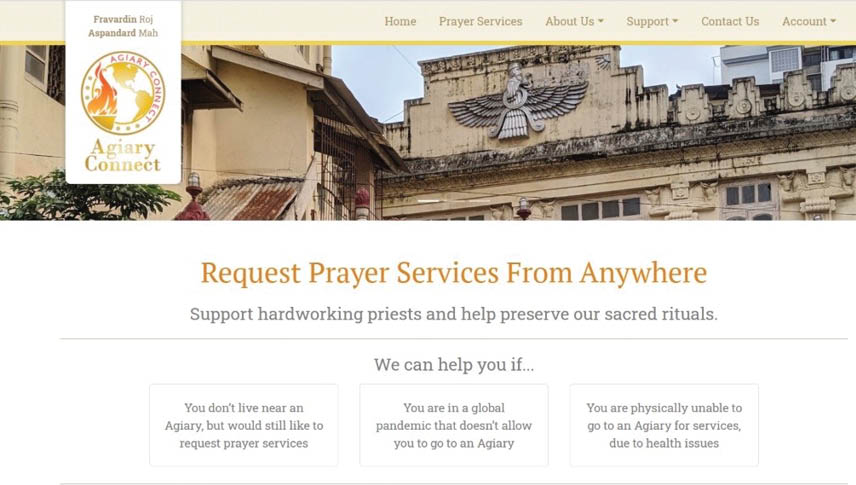 An online religious initiative – agiaryconnect.com – has been recently re-launched, to enable Zoroastrians worldwide to request conducting prayer services online, which would be performed by Mobeds, in the Banaji Limji Agiary (Fort, Mumbai). Founded by three enterprising American Parsis – Dinsha Mistree (Houston), Benafsha Shroff (Denver) and Jamsheed Mistri (California) – agiaryconnect.com – facilitates Zarthostis across the world stay connected with the religio-spiritual aspect of the religion, alongside supporting hardworking priests and helping preserve our sacred rituals. Services are provided in association with Er. Hoshedar Godrej Panthaki, who has been the Panthaki of Banaji Limji Agiary since September 2007.

The idea was originally born in August 2011 and the website was launched the next year, but it shut down in a few years, to be re-launched in 2020 – proving to be of great help to Zoroastrians – globally and in India, if you don’t live near an Agiary, but would still like to request prayer services or you are in a global pandemic that doesn’t allow you to go to an Agiary or you are physically unable to go to an Agiary for services, due to health issues

As per the website, “Because so many Zoroastrians live abroad, the demand for Temple services have declined. As a result, many of our brightest priests are choosing higher-paying secular jobs instead of practicing and preserving our rituals. In order to solve these twin problems, we offer a range of services. One can do anything from donating sukkhar and lighting a divo to requesting higher-level services such as the Farishta ceremony and the Vendidad.” Prayer services offered also include conducting ceremonies for Tandarosti, Yajashne Ceremony, Jashan and the Muktad – which makes the website even more useful in keeping with the oncoming Muktad days.

The website also states that prayer services will be performed only for Parsi-Irani Zoroastrians, as traditionally defined and understood. Priests will retain the right to refuse performance of any ceremony. If it is found that non-Parsi-Irani Zoroastrians are having these rituals performed, they will shut down this service immediately, which would be a shame for other adherents.

Though the Banaji Limji Agiary is the only Agiary offering these services currently, Agiary Connect is looking to expand to other Agiaries across the world and invites those interested to connect with them on the website.