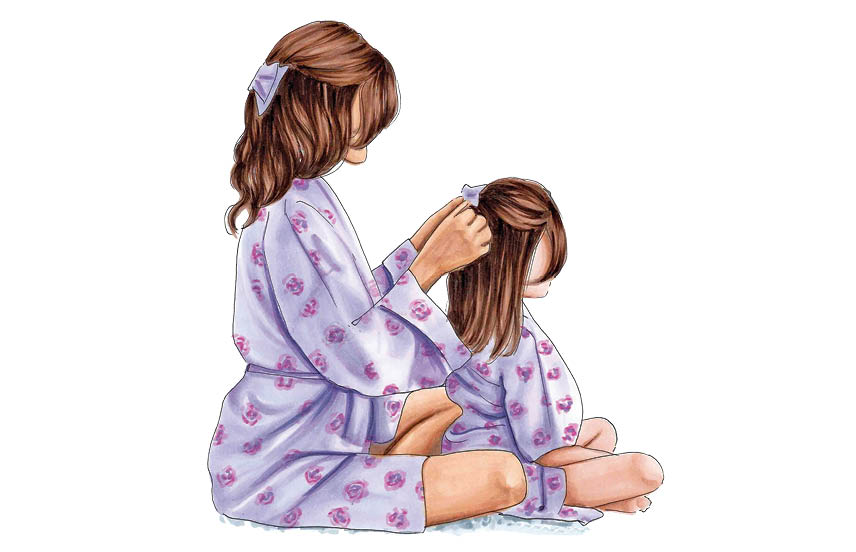 In the Egyptian book of the dead as well as the Buddhist ‘Bardo Thodol’, it is mentioned that when a soul is about to incarnate, it chooses its own mother with the help of Karmic-angles within the limitations of its Karma. It also says that not all souls come to give happiness to the mother. This is because friends as well as enemies from past births may come through you as your children.

Now, as we all know, a mother-daughter relationship is a complex, intense one, since no one can love totally or hate totally. However, it cannot be denied that its very special between a mother and her daughter. The bond of the umbilical-cord is so strong that however much these two women argue, disagree, exchange words that they may regret later, their love never diminishes.

I’ve just finished reading two unbelievably disturbing books by American authors who seem to suggest, even support, the theory that some mothers can be bitterly jealous of their daughters! Michale Hanson, in her ‘Motherly Envy’, writes, “As a daughter grows up, her mother grows older and she doesn’t feel good about it. She starts being envious of her daughter’s lifestyle and tries to recapture her own youth. Today, mothers have tremendous pressure to look attractive with dieting, workouts, face-lifts, implants etc. because the days of the old cuddly mother have gone.”

Child psychologist, Razika Parker, writes in her book, ‘Torn Into Two’, about the conflicts that mothers and daughters have, “We are all ambivalent, but since mothers are so idealized and expected to be always loving and giving, it’s very difficult to own up to bad and negative feelings for the children she bears; and jealousy is one of them. Today’s mothers want to look just as attractive as women a generation younger than themselves – and that includes the young woman they gave birth to!”

In Hollywood, we know of two very sad cases of a mother’s envy turning into physical abuse. Joan Crawford’s adopted daughter had revealed this sad abuse in her book, ‘Mommy Dearest’, which was later made into a film called, ‘Whatever Happened To Baby Jane’. The second case is that of Carrie Fisher, the daughter of yesteryear’s famous film star, Debbie Raynolds, who had written a very sad novel about living with a jealous mother, which was later made into the movie – ‘Postcards From The Edge’, with Meryl Streep playing Carrie’s role. In the end, they show the once-gorgeous filmstar mother battling with cancer, her thick hair, eyelashes and eyebrows gone due to chemotherapy and her daughter wrecked by drugs due to fights, abuse, rivalry and competition with the over-demanding, difficult mother.

We can’t imagine such a relationship, but these things happen. Just read Nancy Reagan’s autobiography and you’ll know that a mother can be so cruel as to lock up her daughter in a room or in Carrie’s case, cut off the daughter’s hair or even burn her best dress. Psychoanalyst Judith Jackson, author of ‘The Face In The Mirror’, has a theory that some mothers feel envious when they become grandmothers. She says, “Here is a daughter doing something that her mother can no longer do (produce a child). It reminds the mother that her productive time is over and she envies the daughter’s womb just as she herself is coming to terms with menopause.”

I don’t buy that at all. For any woman, becoming a grandmother is a tremendous joy! Speaking for myself, I became a granny at forty and since then, I’ve enjoyed my grandchildren and played with them much more than I ever played with their moms when they were growing up!

Somewhere between these unfortunate women and those who over indulge their daughters are normal mothers (like you and me) who want only the best for their daughters, pray for them and bless them, no matter what. However, to expect only sweetness in any relationship is unrealistic because most mothers and daughters have some area of conflict.

The mother-daughter relationship can be so rewarding, fulfilling and loving. It can be a lifelong friendship between two women of different generations. We Indian mothers are so lucky to have strong family ties which rule out jealousy and envy.

So can a mother envy her daughter and be hurtful against her own flesh and blood? Mostly, the answer is ‘no’, but there can be a few exceptions – because it takes all sorts to make this world and there are mothers and mothers! Friends as well as enemies of the past birth can be in a mother-daughter relationship and karma has various ways of being resolved! A mother-daughter relationship is like life itself – which means that it is wonderful, varied, desperately hard work, moving, tender, complex, infuriating, frustrating, full of laughter, tears, joys, disappointments, high-highs and low-lows – but definitely worthwhile!