Aapro Cyrus Broacha, the Brand Ambassador of Humour, unleashes his hilarious take on Maharashtra Politics (we saw that coming!) in our monthly column, ‘Cyrus The (Not So) Great!’

It’s time to show courage, Dickras and Dikrees! We must feel no shame! We must not bow down!! We must not look away!!! We must accept our characteristics whole-heartedly. We must learn to embrace what is ours. People of alternate sexuality often behave the same way. “Why?” I ask. They have nothing to be ashamed about. Tax evaders also feel much the same anxiety. Ok sorry, they should hide. My mistake, sorry. Please pay your GST.

However, coming back… Dikras and Dikrees, we should feel not an ounce of shame, that we are proud ‘Eggetarians’. First, let me clarify that the word – ‘Eggetarian’. It means those who like to eat eggs with everything. It doesn’t mean those who only eat eggs. For the latter, there is another word that is applicable – ‘Cheap’!!

On the glorious occasion of World Egg Day, October 9th, 2:30 p.m., (actual celebration as per chogaryu), let us show the love and affection, as also the debt we owed to that 3 inches of white shell, which is commonly known in Encyclopaedia Britannica, (under the title commonly known), as ‘The Petrol Of The Parsis’. It was originally titled ‘The Gas Of The Parsis’… primarily because of its American author. You see, Americans prefer the usage of the word gas, instead. But, you and I both know that, ‘Gas’, as a word, has too many connotations, and is too close to many truths, vis-à-vis the relationship between Mr. Parsi and Mr. Eedu. Hence, after a public litigation, by a very private individual – Dorabshaw Bharucha, the word, ‘Gas’, was switched to ‘Petrol’.

However, it is very important that we get a small introduction to the egg. The egg was first discovered by the Persian Emperor Cambyses the 1st. Cambyses had an awful singing voice. Whenever he sang, people left the country, never to return. In fact, that is how the nearby country of Iraq was created! On one such occasion, the Emperor’s singing caused many hens and chickens to leave the roost in panic. Thus, leaving thousands of eggs unattended. The ancient Persians had a peculiar habit – anything new would always have to be tasted. And that’s how the ‘Idu Culture in Persia’ was born.

Later on, Arthur Xerxes – The Magnificent, used eggs as a fool-proof strategy in war. Before hand to hand combat with the ferocious Spartan Warriors, the Persian soldiers were asked to consume eggs. At close quarters, the aroma got to be too much for the Spartans. They begged to be excused. Even today, modern day Greeks have no love for eggs. They prefer cottage cheese. Sadly, ‘World Paneer Day’ is three months away, so I’ll save that story for later. 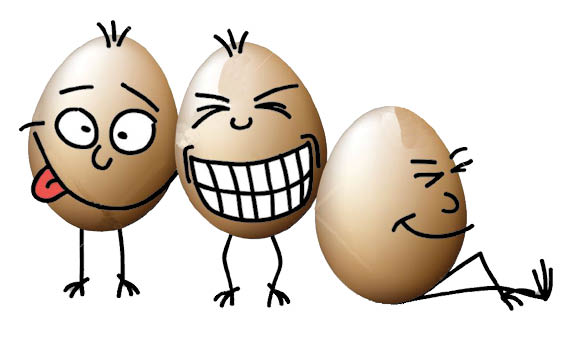 Now, to fast forward this story, as I’m running out of paper, you are running out of patience, and Faredoon uncle is running out of eggs, let’s move this up to the Parsi travellers, who escaped persecution, and landed on the Gujarat Coast. It is they, who brought the eggs to India. India, in fact, had to that point refused to indulge in chicken or eggs. Not on moral grounds, or hygienic grounds, but because through the length and breadth of this beautiful country, no wise man could provide the correct answer, to the age-old perplexing question, ‘What came first, the chicken or the egg?’ India, without the Parsis, was always asking questions. Thanks to the arrival of us Parsis, they finally got some answers.

On the monumental occasion of World Egg Day, let me end by reading out a note by a Champion Parsi power-lifter, (7 Golds and 3 Silvers at the Parsee Olympics held online in August) Faredoon Furniturewalla. This is what he said:

If you had feet, I’d wash them. Just as I wash my hands after consuming you. In the words of Aapro Freddie, ‘You are the Champion, my friend’.”

The rest is in Gujarati, and in poetry form. However, Eedu has many rhyming options so much so that the poem never ends! Thankfully, this article does.

Dikras and Dikrees, with head held high, join me in downing a Parsee Peg, to salute our friend, the ‘Petrol Of The Parsis’ – The Eedu! Happy World Egg Day. Eedu Mubarak!!