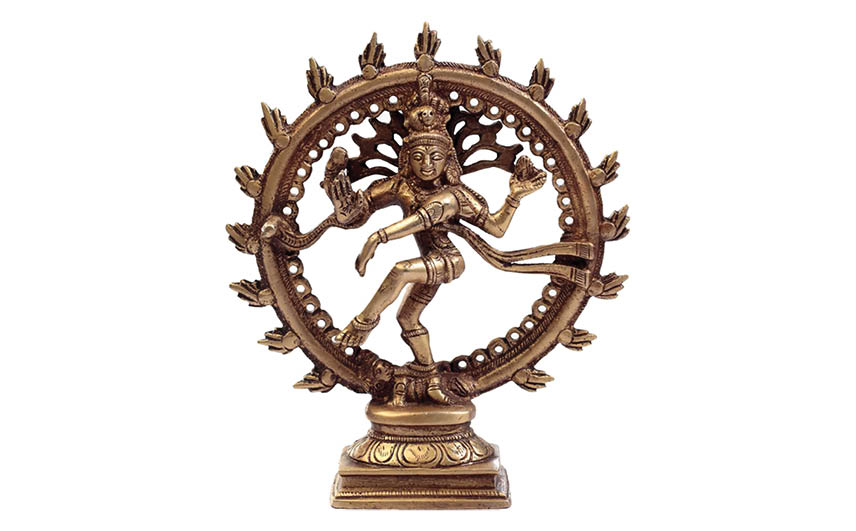 Benjamin Rowland mentions in his book, ‘Art and Architecture of India’, that the works of art are guideposts to lead men by slow or sudden intuition to find the esoteric treasure hidden in the shrine of their own hearts. In art, we find several deities from the Hindu Pantheon of Gods like Ganesha, Nataraja and Vishnu. We also find holy symbols like Om, the Swastika and Drii (a predecessor of Om in ancient India), devoted to Aditi or Surya-Devta. Religious philosophy has always been conspicuous in all our art forms. 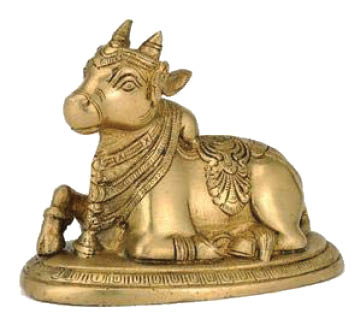 The most basic philosophy explicitly discernible in Indian icons, paintings and sculpture is that beauty is inherent in the spirit (atma or soul) and not in the matter. In fact, in one of our ancient treatises on art called, ‘sukraniti’, it is clearly stated that an artist should visualise only Brahma (God) even while making objects perceived by the senses.

In Hindu philosophy, the Supreme divinity has neither form nor attributes and is beyond time and space. Sage Yagnavalkya, who is said to have inhabited the earth three thousand years ago, called it the ‘eternal illusion’. This illusion of shadow play and maya is actually what we, with our limited vision and minds, readily perceive. Since time immemorial, the ignorant layman could not grasp this and therefore, this supreme reality had to be given forms and attributes in the form of Gods and Goddesses, representing the expression of a highly complex, transcendental and speculative philosophy. They are not mere objects of art, but articles of devotion.

The Lord of dance, ‘Nataraja’ (Nata meaning dance and Raja meaning Lord), is the most famous Indian icon the world over. The dance of Shiva is the dance of the Universe, of the cosmic process of creation and destruction, of man’s eternal journey, lakhs of time (Laxachorashi) from the womb to the tomb. It is a symbol of continuous metamorphosis of a ceaseless beginning of the circle of life and death, both eternally juxtaposed in a flux.

Every Hindu deity in an art form has a special vehicle (vahan) like Ganesha’s mouse. The lotus pedestal on which Nataraj stands, symbolises hriday kamal (lotus of the heart) with 16 petals for the 16 rays of consciousness. The crescent moon in his hair represents eternity and the serpent represents energy. His matted hair (jata) symbolises knowledge (gyan). In each ear, he wears different rings depicting the male/female principles. He dances on the body of a dwarf (Mushalaka), which represents human shortcomings – Desire (Kaam), Anger (Krodh), Greed (Lobh) and Attachment (Moha). Shiva’s third eye is the eye of perception, and legend has it that when it opens, there is destruction (Pralay).

In sculpture, paintings and dance, Vishnu is represented as sleeping on a serpent (Cosmic Sea), which is also known as Ananta (or endless). At times, this serpent is also called Shesha (the remainder). From the angle of symbolism, the serpent is a metaphor for the destroyed past universes. Vishnu holds the symbols of Maya in his hands, the most important being the discus (sudarshan chakra), depicting Vishnu’s role as the defender of the world against evil. The conch shell (shankh) represents the origin of life. When blown, this shankh is believed to induce celestial music or Naad-Brahma. The mace (gada) represents knowledge, the seat of all mental powers while the lotus depicts the role in creation.

In ancient times, trade flourished between India and other countries via seaports, along the great trade route. Due to this, Indian art was carried in ships constantly to different ports of the world, spreading Indian artefacts throughout South-East Asia and also by the overland route to various European countries, like Italy and Greece. At intervals, convoys of ships and other vessels, like Dhows were manufactured in Arabia and South India to carry the sea-trade in Indian silks and spices across the Isthmus, as far as Alexandria.

Portraits figuring the Indian Goddesses of wealth and knowledge, that is, Laxmi and Saraswati, have been unearthed at various places in Southern Europe. Even the sacred bull called Nandi, in Indian literature, has been found in Egypt. The bull was a sacred symbol even to the Dravidians. The sacred bull of Egypt has its analogue in Shiva’s Bull. Palm leaves with paintings of various deities from the Hindu pantheon of Gods were common to both – Egypt and South India. Even respect for elders and ancestor-worship of Egypt is matched by the same values held by the Malabar Dravidians of ancient India.

Thus, we see that Indian Art has always been sacred in its origins and flourished in many parts of the world since art has no boundaries. It is beyond all geographical and intellectual barriers.