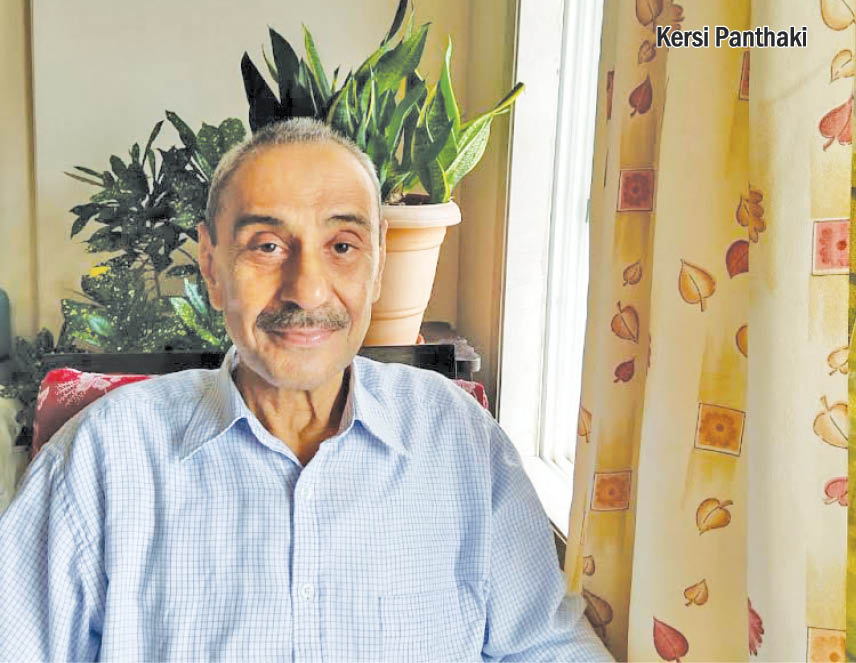 Symbolising inspiration, compassion, mental and physical grit, humility and hope, Er. Kersi Panthaki leads from the front when it comes to walking the talk, or should we say cycling the talk! With the noble fervour of selfless service in his heart, and the support of friends and well-wishers, Er. Kersi embarked on a historical cycle-tour, pan-India, in support of the cause – Cancer – which left him bereaved. Weathering the storms of life with unflinching faith in God and undaunted persistence towards a worthy cause, are just a few of the life-experiences that make him the man that our community and the nation is proud of… Special Feature by Parsi Times Reporter – Binaisha M. Surti 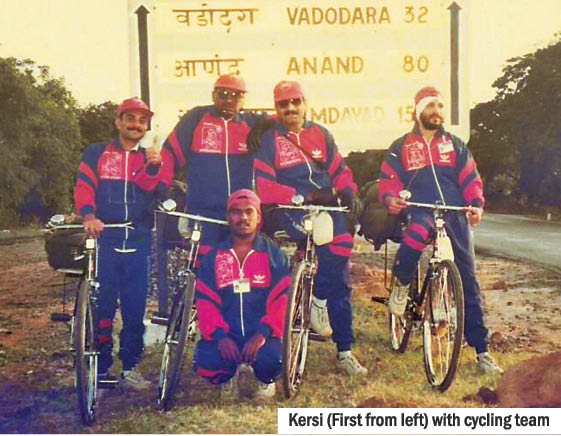 This year marks the 28th anniversary of the occasion when Er. Kersi Panthaki and his four friends – Yezdi Siganporia, Farokh Tantra, Ashok Patil and Ramesh Pawar – all embarked on their bicycles on a 7,500km life-changing journey, pan-India, starting from Bakhtawar building in Nariman Point, Mumbai… all for an extremely noble cause – collecting funds for cancer patients. Completing this challenging journey in four months and three days, these dauntless and fearless men cycled across various Indian states, collecting funds amounting to Rupees two lakhs and fourteen thousand (Rs. 2,14,000) – a princely sum in those days.

This awe-inspiring venture, which was the brainchild of Er. Kersi and jointly sponsored by London Pilsner and Lions Club International, saw these adventurous and braveheart cyclists kicking off their journey starting Mumbai to Baroda-Udaipur-Jaipur-Delhi-Agra-Varanasi-Kolkata-Bhubaneshwar-Chennai-Kanyakumari-Trivendrum-Cochin-Mangalore-Belgaum-Panjim-(Goa) – and finally back to Mumbai via Kolhapur!

Reminiscing how the idea came to be, Er. Kersi shares, “Those days, I was working with Central Bank and I had lost my wife, Roda, to cancer in 1988. We went through a very difficult time between 1986-88 – I saw the first-hand torture and sufferings inflicted by the Big C. It was heart-breaking also to see the plight of the poor people who came from all across India for their cancer treatment – living on footpaths for days, due to lack of accommodation in Mumbai. I just knew I had to do something for all those who were suffering with this disease.”

Before embarking on this all-important journey, in 1991, Kersi and his nephew, Mehernosh Shroff, decided to pay their respects to Iranshah in Udvada on foot from Mumbai, walking for seven days! It is at Iranshah that the idea of an ‘All-India Cycle Tour’ came to him, to support needy, cancer patients. After acquiring the necessary finances with the help of generous donors, Kersi shared his idea amongst friends and colleagues, who were initially sceptical. But this only made him more determined and as her stuck to his guns, eventually, four of his friends came on board, and saw it through! Says Kersi, “As we geared up for this venture, we jokingly called ourselves ‘The Five Pandavas’. I’m grateful to Lions Club members for donating free cycles, kits and uniforms. Late actor and MP, Sunil Dutt who also lost his wife to cancer, blessed us with a recommendation letter too. Then started the tedious job of filling applications. Everything had to be done via type-writers as there were no computers then. A colleague helped sort out all the paper-work. We then got the Police Commissioner and Charity Commissioner’s permission, and finally my Chairman sanctioned my 4-month leave… we were off on our epic journey!”

Kersi meticulously created the itinerary with dates and maps. Back then, the roads and highways were not in a good condition and it would take a tremendous effort to stay safe without any accidents or health hazards, through their journey. Together, they traversed 12 Indian states, with Kersi playing team-leader as much as team-player, always ensuring consensus before finalizing any decisions. The journey, which lasted four months and three days, passing through various states, helped them collect the handsome amount (in those days) of Rupees two lakhs and fourteen thousand.

Sharing about the hardships encountered en route, Kersi says, “All of us went through tremendous ups and downs due to the limited resources. We understood and experienced the true value of life during this journey. While some people garlanded and felicitated us, others weren’t too kind. It wasn’t easy collecting funds with some being suspicious that we were doing this for our own benefit! Some days, we got great good food, other day, we faced hunger. We cycled on in keeping with criteria like the roads and the weather as also our physical strength and mental dispositions. Sometimes, we’d have to halt at villages, going against the original plan, as it would turn dark early in the evenings.”

“I was neither a cyclist nor a sportsperson, but with will power and confidence, we pedalled across 7,000 odd kilometres. Initially, cycling for the whole day would get tiresome and tedious, riding with luggage of clothes for four months, receipt books and other important items. Cycles and their seats were ordinary during our times and our backs would hurt and we’d get painful sores. But we would apply medication and pedal forth! We weren’t professional cyclists, so sometimes we’d reach our destinations early, sometimes late,” he adds.

As a team they joked, laughed and enjoyed their rides but there were also days spent with tussles or quietly – all in all, an undoubtedly unique experience of a lifetime. Language posed as a barrier in some states for this unit of valiant enthusiasts. But in the end, it was all worth the effort and trouble as it was an endeavour for a truly noble cause. “When I think of this journey, I sometimes still wonder how we did it. I say to myself, it was the Almighty above who gave us all the added strength, willpower and protection to pedal on and complete this challenge. I believe that when God empowers man, he can achieve something extraordinary in life. I would also like to thank my daughter – Meher, and son-in-law – Zubin, who motivated and inspired me to share my story,” concludes Kersi.

After the completion of this incredible journey, when they finally arrived in Mumbai, they had lost a lot of weight and were sleep deprived due to continuous pedalling for months on end. The money collected was then audited by the Charity Commissioner’s office and donated to ‘Shanti Avedna Ashram’ – a hospital for terminally ill cancer patients in Bandra, Mumbai. In the presence of many dignitaries, a small plaque was put up on the ground floor of the building, which reads, ‘It is better to light a candle than to curse the darkness’. It’s still there to this day, as a remembrance of their journey filled with happiness and hardships, but one which makes us all very proud of their efforts.

Kudos to Er. Kersi and his four friends for this exemplary show of mental and physical grit, and their persistence and success in overcoming every obstacle. They truly serve as the beacons of inspiration and compassion, setting the prefect precedent for the youth of our community and our country.