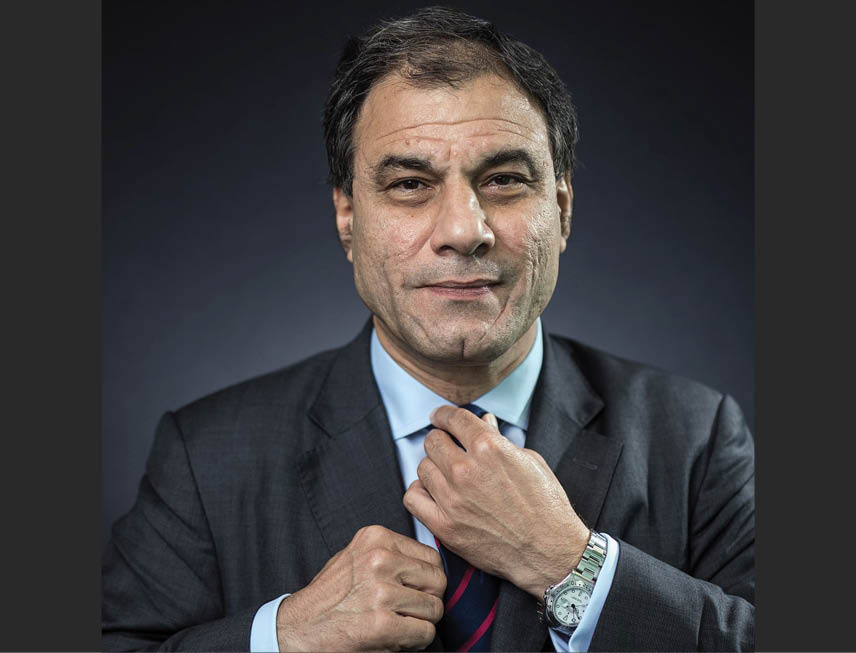 When Lord Karan Bilimoria speaks, the world listens! And so it was on the evening of October 3rd, 2020 (IST) when he charmed and mesmerized the participants who had logged on, to gather the pearls of his wisdom that he was sharing, on the topic, ‘Lessons Learnt From Covid-19 Crisis’, in a webinar organized by the WZCC’s Dubai Chapter, headed by Meher Bhesania, the Global Director for the Middle East Region. Not surprisingly, it was attended by a large number of people, across continents and time zones, looking forward to hear what this industry stalwart would expound.

The dynamic Global President of WZCC, Edul Davar, offered a warm welcome to all who had logged in and invited UK-based, Dorab Mistry, to introduce the key speaker of the evening – Lord Karan Bilimoria, Member of the House of Lords, UK Parliament and the Chairman of the British Confederation of Industries and the Founder and Chairman of Cobra Beer. Renowned for his business acumen, he is one of the leading few trailblazers from the Asian diaspora to have shattered the glass ceiling of British stiff-upper-lip politics and been graciously welcomed into the inner circle of British peers. 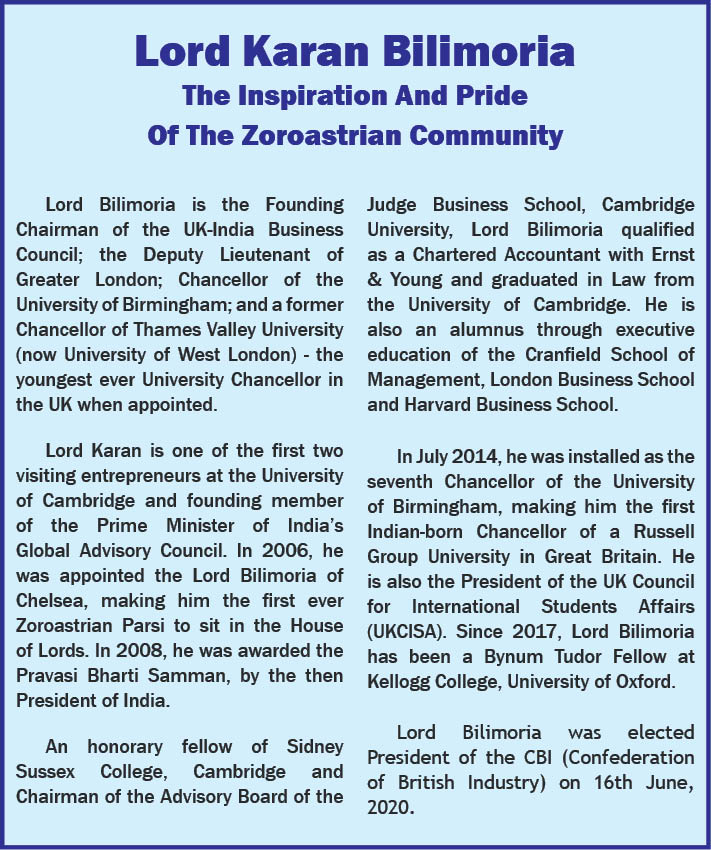 Dorab Mistry especially extolled two aspects of Lord Bilimoria’s personality, the first being his entrepreneurial passion and drive. Despite his qualifications as a CA holding a Law Degree, Lord Karan decided to take the risk and plunged into independent business, as opposed to taking the easier career option fueled by his qualifications. The other aspect, and probably the one which endears him all the more to the community, is his unquestioned allegiance to his roots as a Zarhtosti Indian… put perfectly in jest by Dorab Mistry, “Lord Bilimoria is our key to Buckingham Palace!”

Looking his usual dapper self, dressed in a white shirt and tie, Lord Bilimoria commenced his talk on lessons learnt from the Pandemic by referring to it as a ‘black swan’ event. He likened it to other events in human history that have changed the manner in which we live, travel and essentially rethink our way of life… like the terror attack of 9/11 or the financial crisis that affected world economies. He recalled, how, for the better part of 2019 and early 2020, Britain was focused on Brexit and it wasn’t until March that they were forced to take notice of the Covid-19 crisis.

On the dreaded ‘ides of March’ or March 15th, he contracted the virus too, at a time when the testing capacity in the UK was considerably strained and therefore, limited to only those patients admitted in hospital. “I had the symptoms of loss of smell and taste, fever and weakness. But I have been sticking to a fitness regimen of boxing, tennis and Pilates, and overcame the illness. Then Prince Charles contracted the virus. On the 23rd March, the UK went into lockdown. My company supplies Cobra Beer to over 7000 restaurants and on account of the lockdown, we had to scale down our brewery capacity to just one-third,” said Lord Bilimoria.

“One mantra I have always lived by, in my journey of three decades in business, is ‘Adapt or Die’. It is during such a crisis that the question arises – How resilient is your business? We faced one of our greatest challenges but prevailed, and on 4th July, the restaurants re-opened,” he added. In August, 2020, the Cobra sales exceeded that of August, 2019! This is thanks to the government subsidizing Monday, Tuesday and Wednesday nights to support the restaurant businesses. Lord Bilimoria expects that sales of September 2020 could follow suit too and exceed those of 2019 again, with the innovative promotion strategies devised to cope with the pandemic crisis. “This is possible if you have can adapt, have a great team and a great brand,” he emphasized.

Lord Bilimoria stressed on the need for collaborations to achieve success in the pandemic. Underlining his point, he shared examples of how the UK did not have sufficient hospital beds to meet the requirements of Covid-19 patients. So, the NHS, private sector, universities and the army collaborated to set up health facilities in the country to cope with the increased requirement – and came to be known as the ‘Nightingale Hospitals’. Even when it came to Britian’s favourite sport, football, it was only possible to finish the season of the football premier league, only with “collaborations that allowed for the weekly testing of all those associated with the league, including the players, coaches and referees,” he stressed. Another prime example of collaborating for success is the impending COVID-19 vaccine, which is being developed by Oxford, Astro-Zeneca and our very own Cyrus Poonawalla’s Serum Institute of India. Thus, he unequivocally enlightened the online audience, how collaborations facilitated success during a crisis.

“Technology enabling should be the priority in infrastructure. Technology is one of the key instigators in getting the economy on track,” asserted Lord Bilimoria. He was especially in favour of medium and small-scale enterprises using technology to further their business growth. He shared instances of how businesses in Britian were able to go digital and customers could access which restaurants were open, as also their menus and thus, place orders.

Lessons From The Past:

Our micro-community of Zoroastrians is bringing, “the power of diversity so very amazingly,” said Lord Bilimoria, speaking about how studies have revealed that with greater diversity and inclusion in the boards of companies, profitability increases by almost 39 per cent! Lord Bilimoria has launched an initiative at the CBI (British Confederation of Industries), titled, ‘Change The Race Ratio’, to encourage ethnic minority participation in business and leadership, and global giants like Microsoft are already on board.

Speaking on the need and importance of encouraging our youth into entrepreneurship, he says, “the best way to predict the future is to look to the past. Within our community, we have so many role models who inspire. One should look at the pandemic from the point of view of untapped opportunities.”

After adroitly answering questions posed by those who had followed his address with rapt attention, Lord Bilimoria said that the pandemic had indeed been a great learning experience. He closed the Webinar, with an apt quote by Mahatma Gandhi, “Live as if you were to die tomorrow, learn as if you were to live forever.”

Under the able guidance of WZCC’s Global President, Edul Daver, and the initiative and efforts of its worldwide Chapter Heads and associates, WZCC’s Webinars have well and truly been a great boon for the community, all through the pandemic, conducting insightful, informative and highly beneficial sessions, with speakers who are authorities in their respective fields. Our very own tech-guru, Yazdi Tantra has been holding a series of Zoom Meetings online on Technology for the layman, under the title ‘TantraTech’, every Friday at 9:30pm (IST). Anyone can attend these by on to https://bit.ly/yazdizoom. (Instructions available at https://bit.ly/Zoom_Instns . Past recordings are available on YouTube at: https://bit.ly/yazdiyoutube.)