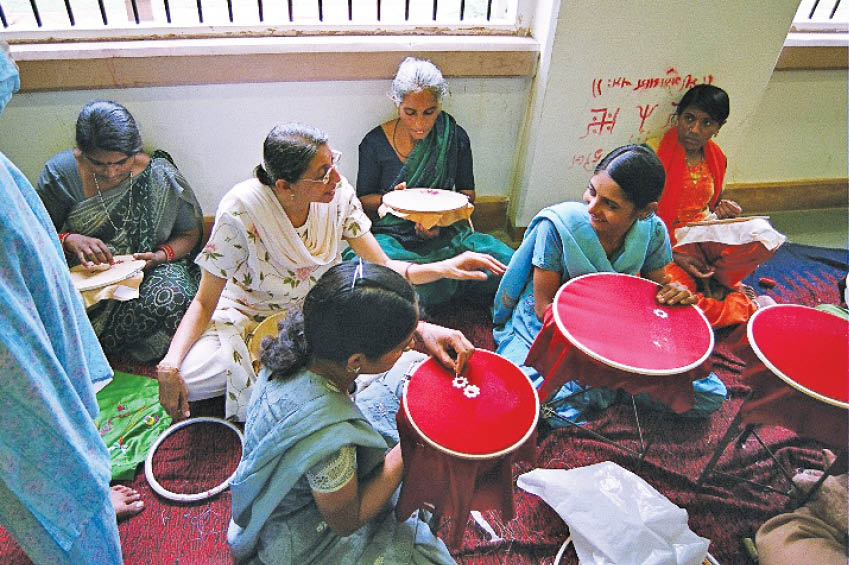 Parsi Zoroastrians have carved a niche for themselves in the country… from leading industrialists like Ratan Tata and Godrej to an army of talented Bollywood actors, prodigal Parsis are an asset to India’s culture and economy. With a population of less than 55,000 Parsi/Irani Zoroastrians in India, our lip-smacking food, peculiar surnames, stellar Bollywood movies, acting skills and the sweet mentions – from ‘dikra’ to ‘gadhera’ – are a part of India’s popular culture, but our expertise and contribution to the fashion world is lesser known… more specifically, the Art of Parsi Embroidery. Parsi Times presents the concluding part in our much appreciated Feature Series – ‘Parsi Embroidery: A Heritage Of Humanity’ – a labour of love and much research, by Dr. Shernaz Cama, the Director of the UNESCO Parzor Project for the Preservation and Promotion of Parsi Zoroastrian Culture and Heritage, sharing the vibrant history of Parsi embroidery.

Several elders across Gujarat, recall Chinese men on bicycles who sold garas by the weight. The heavier garas, with more embroidery, were more expensive. Over the years, a close relationship developed with their clients. The Chinese would leave their heavy bundles on a particular veranda during their visits. In the heat of the afternoon, they rested on the otla, veranda, and dozed. While waiting for the cool of the evening they would take out little embroidery rings to begin work. Parsi women, after completing the day’s chores, would come out on the otla to watch the embroidery with interest. So, Chinese peddlers taught Parsi women certain stitches and motifs. The women added their own sacred symbols and the aari and mochi stitch which they learnt from their Gujarati women friends. In the Deccan, Deccani Zari work began appearing on Parsi Jhablas and childrens’ prayer caps or topis. In this way, Chinese embroidery became part of Parsi craft. 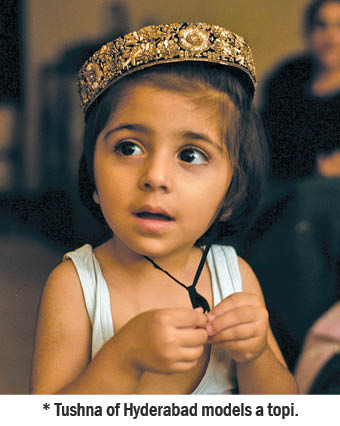 The educated and liberated Parsi women created businesses or professions for themselves. As times changed and Parsis moved from Gujarat into small apartments in urban centres, a way of life was lost. The large embroidery cupboards neither fitted into the flats of Bombay, nor could they be carried when Parsis migrated abroad. All that remained were the products – the garas, jhablas, ijars which carried the memory of a peoples and its culture.

Parzor Crafts began a revival movement by teaching Parsi embroidery with the help of the Textile Ministry at Workshops across India, giving a new vocabulary to skilled Indian crafts persons. 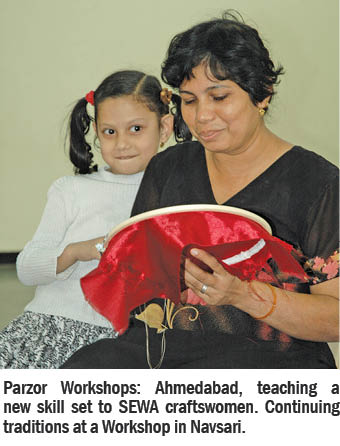 This was the beginning of a movement beyond just one community. Today, ASHDEEN, the Design House, has introduced this genre to celebrities like Oprah Winfrey, among others. Catering to a new market, Parzor Crafts and ASHDEEN create stoles and scarves, bags and potlis as well as designer wear for the Indian market in the form of wedding lehangas and Western dress. 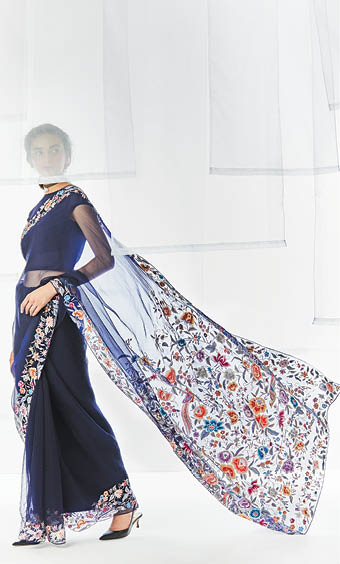 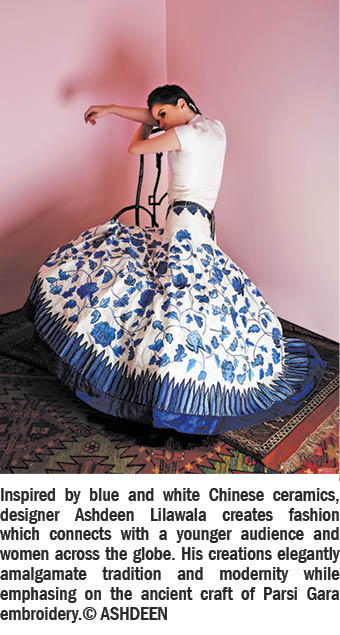 And thus, an ancient multicultural craft has become a global treasure of hand embroidered skill – rich in its symbols and an heirloom to cherish – a true Heritage of Humanity!

Parzor has been documenting our Parsi/ Irani Textiles, embroidery, the special needles and thread, including pure uncoloured silk floss, across Zoroastrian homes in India, Iran, Hong Kong and the Western Diaspora. We often find that people tell us, “Yes, we had tracing paper drawings of my grandmothers but we didn’t know what to do with them and threw them out.” PLEASE HELP US PRESERVE OUR PRECIOUS HERITAGE. Do let us know what you have and don’t want to keep on any of our Crafts including Crochet, Toran books, embroidered pieces or topis in tanchoi which are torn but have special stitches or patterns and most importantly, kor looms made of Saal.

We will preserve the items in our Resource Centre and list the Donation for our Archives. Textile Designers and heritage craft experts from across the world can study them and learn and teach the crafts of Parsi Textiles to a new generation! If you can preserve your own items, we can advise on the best methods and would be grateful if we can photograph them. For all items and photography we appreciate the history/story/background of the person who owned or made the items with approximate dates .

Do share and let us make Parsi Textiles once again known as one of the Greatest Heritages of a multicultural world.Thank you for your support.

Parzor Crafts support the research & publication programmes of Parzor Foundation; a Not for Profit organization following the mandate of UNESCO. All contributions towards Parzor Crafts are exempt under Section 12A & 80G of the Indian Income Tax. Please contact: parzorfoundation@gmail.com / nilouferparzor@gmail.com for the Catalogue and orders. WhatsApp No: +91 9810152764.

Acknowledgments: The author wishes to thank the publishers of Peonies & Pagodas: Embroidered Parsi Textiles from the TAPI Collection, 2010. All interviews have been conducted during Oral Tradition Recordings across India, China and Iran by researchers from the UNESCO Parzor Project.