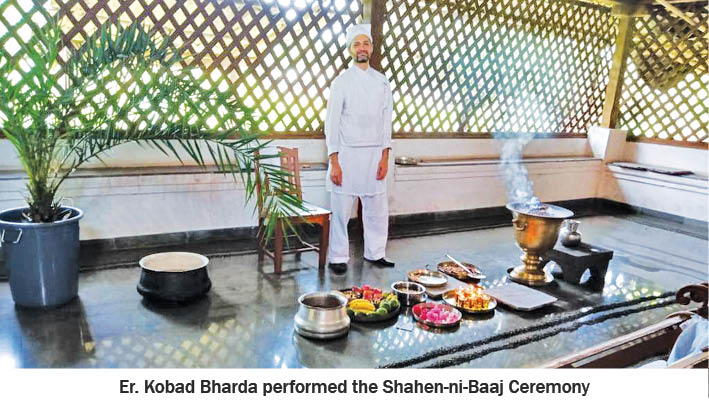 A Shahen-ni-Baaj was performed under the auspices of Udvada Nine Families Shahenshahi Athornan Anjuman, on 26th September, 2020 (Roj Mohor – Mah Ardibesht, YZ 1390), wishing away the ill effects that the pandemic has caused to humanity. Er. Kobad Bharda performed the Baaj Ceremony at the Udvada Doongerwadi premises at 9:40 am. Alongside the Baaj, a Jashan ceremony was also performed by Vada Dasturji of Iranshah, Khurshed Dastoor, along with 10 mobeds at the Udvada Doongerwadi.

In olden times, the ‘Shahen ni Baaj’ ceremony was performed when an unforeseen calamity or disaster posed itself upon a Kingdom or region and the King (the Shahenshah) and his  citizens (Anjuman) wished for relief from the calamity. The Shahen Baaj, when duly consecrated, has always proven to be effective. Though this Baaj has seldom been performed in modern times, whenever offered, whether collectively or individually, it has brought about desired positive results.

During earlier times, the onus of performing this Baaj fell upon a senior but retired pious priest. The priest, who had been assigned the task of performing this ceremony, was one who followed the religiously prescribed sacramental lifestyle and who had performed many liturgical ceremonies in his lifetime. It was believed, that after performing the Shahen ni Baaj, this priest would no longer perform any other religious ceremony because, they opined that by way of performing the Baaj, he himself had offered to take the ill effects of the disaster onto himself.

In this day and age, due to a paucity of good Mobeds (especially those with the ability of performing higher liturgical ceremonies and one of the longest and most complex Baajes, as this one) the practice adopted is to take a short break. This Mobed, who has undergone a Barashnum (a nine-day seclusion) offers this Baaj and in this case, after the Baaj, he absolves himself of the Barashnum.

A set of 7 barsums, 132 droans (daruns), dry fruits, fruits, malido, etc is kept as an offering. A mobed with barashnum offers this Baaj in the name of Siroja, Sarosh and Adrafravash.

May the Shahen-ni-Baaj bear fruit, as it has done in the past, during these trying times!

May human beings once again rejoice and May there be Peace and Harmony on Earth!
May the invoked Angles destroy the Evil Spirits and lessen Suffering!


May the Glory of Iranshah Spread afar bringing Joy and Prosperity to all!