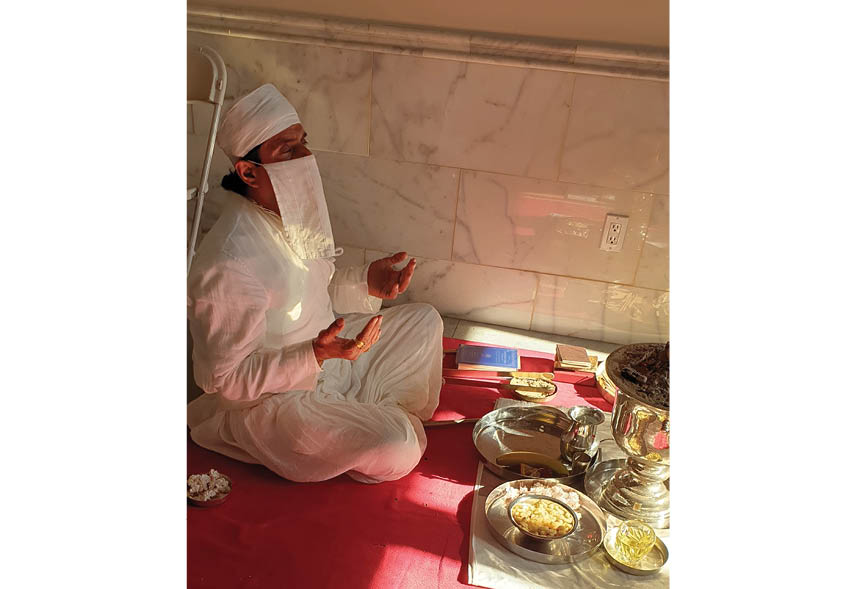 A Jashan was performed in honor of Khordad Mah, Khordad Roj, at the Zoroastrian Association of California (ZAC) by Er. Zarrir Bhandara. Sponsored by Maneck Chichgar, the jashan was attended by about 25 Zoroastrians in person (who maintained pandemic mandatories) and 25 more digitally.

After the Jashan, Er. Zarrir led the community in Humbandagi and shed light on the prayers, saying “Khordad Ameshaspand looks after the element of water and the attribute of this Amesha Spenta is perfection. One way we can strive for perfection and balance in our lives, is by taking care of our environment. In doing so we also take care of ourselves because we are all connected to the Earth and its creations, in an intricate web. We Parsis talk about good thoughts, words and deeds, but are we applying that to our environment? We perform and attend Jashans in which all creations are represented in the ceremony, but do we respect those creations on a daily basis? According to NASA, 19 out of 20 of the Earth’s warmest years on record have occurred since 2001.The global sea level has risen about 7 inches in the last 100 years. That may not seem like much, but it can and has caused catastrophic effects. If we do not significantly reduce our carbon footprints, we could propel devastating effects of climate change.” He urged people to be more conscientious of their daily actions and the impact of these on the environment, and to implement our Zarthosti values daily, not just through prayer.

He then invited geologist Maneck Chichgar to address the crowd, who spoke with great zest and had the listeners rapt with attention. He said man was the the caretaker – the stewards, of our planet, quoting the famous saying, ‘We do not inherit the earth from our fathers, we borrow it from our children!’ He said, “Of great significance is climate change, as growing levels of carbon dioxide are driving the Earth’s temperatures up, leading to rising sea levels, flooding and erosion of coastal regions, erratic and extreme weather patterns, an increased risk and spread of certain diseases, and reduced water quality, among other challenges. Increasing pollution and waste, resource exploitation, loss of biodiversity, and deforestation, are having a detrimental impact on Mother Earth and all of creation.”

He stressed on being more conscientious about our role in taking care of all of nature’s elements – and the solution lay in the 3 Rs – Reduce, Reuse and Recycle. “Reduce our wants – material and physical…. Reuse our material possessions thereby limiting disposables… Recycle whenever possible. To this list I advocate another R – Refuse buying or bringing home those items which cannot be reused or recycled. Think before you buy!”

He informed how over the last century, humans were responsible for the decimation of over 60 wildlife species on earth.  He spoke about the dangers of the enormous amounts of waste and plastic debris in the seas, caused by man, present in all oceans in the world causing death to sea-animal life. A change in habits could go a long way in our efforts to conserve nature. “We can save 3 gallons of water per day if we turn off the tap while brushing our teeth or save 5 gallons by cutting a shower short by two minutes. Separating the waste in the house (dry and wet) also helps greatly.”

He concluded with a quote by Pope Francis, “May the relationship between man and nature not be driven by greed, to manipulate and exploit, but may the divine harmony between beings and creation be conserved in the logic of respect and care.”

About By Er. Zarrir Bhandara

View all posts by By Er. Zarrir Bhandara →