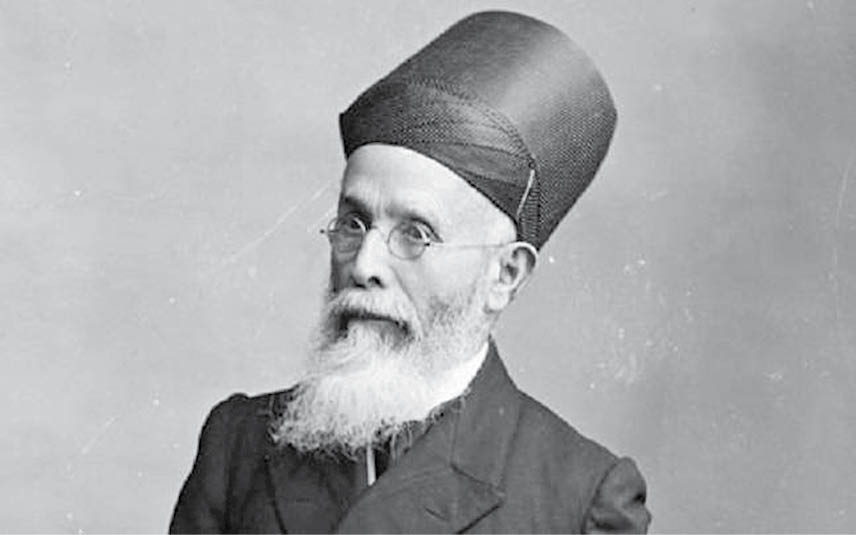 “All great leaders have had one characteristic in common: it was the willingness to confront unequivocally the major anxiety of their people in their time. This, and not much else, is the essence of leadership.” –  John Kenneth Galbraith

Politics today is a dirty word. Almost six and a half centuries ago Plato philosophized, “Mankind will never see an end of trouble until lovers of wisdom come to hold political power, or the holders of power become lovers of wisdom.” Us Zoroastrians are not just lovers, but worshippers of Mazda or wisdom. Yet, for some strange reason, ‘Parsi Politics’ tends to bring out the worst among members of our miniscule community.

During such times, my thoughts run to Dadabhai Naoroji, the Grand Old Man of India for inspiration and solace. Dadabhai was a multifaceted personality – nationalist, statesman, educationist, economist, social reformer and parliamentarian. His sense of fairness and fearlessness endeared him even to those he opposed!

Setting Standards: The true test of a leader is his character; the quality of a leader is automatically reflected in the standards which he sets for himself. It is courage, fairness, justice, integrity and morality that cannot be hired or bought. Lives of great men like Dadabhai constantly remind us that it is character that endears a true leader to not only the masses but even to those who hold a different ideology. Like Benjamin Franklin said, “There was never a truly great man that was not at the same time truly virtuous.”

Social Reformer: As an ordained Zoroastrian priest, it pained Dadabhai to see all forms of superstitious beliefs and practices that had crept into the hearts of his fellow Parsi Zoroastrians. In 1851, he founded a society called the ‘Rahnumae Mazdayasne Sabha’ to restore the Zoroastrian religion to its original purity and simplicity. The society is still in operation in Mumbai. He also started two religious’ magazines – ‘Dharma Marg Darshak’ and ‘Rast Goftar’ to educate Parsis on religion.

Like we see today, some of his Parsi critics indulged in calumny. However, he declined descending to their level. Taking his stand on reason, he challenged them to meet him on that ground. In the end the light of reason succeeded in dispelling the darkness of ignorance and superstition and the religion of Prophet Zarathushtra was weaned from many alien accretions. Although one could gather from the tenor of his speeches and writings that he was a social reformer, he spoke of the pedantic, orthodox school with his usual fairness and forbearance. Even Professor Max Muller observed that there was “no expression of contempt anywhere, even when the temptation must have been considerable.”

Diwan of Baroda: He advised and assisted the Maharaja, Malharrao Gaekwad, of Baroda in tackling various issues with the British Agent, and pleaded his case in London. In return, the Maharaja offered Dadabhai the post of Diwan (Prime Minister) of Baroda State. Whilst assuming the reins of office, Dadabhai had told the Maharaja, “I am not accepting your service for gain or glory. My ambition is to bring about, with your kind co-operation, reform in the administration of your State. As long as I have your confidence and feel I am useful, all my energy will be at Your Highness’s disposal. But the moment I find that the mutual goodwill is lost, or that my usefulness has ceased, I shall go.”

In his capacity as Diwan of Baroda, he introduced several reforms but later resigned and left Baroda on January 11, 1875. Dadabhai was too honest and straightforward to be of any long-term service to a weak Maharaja of a State ridden with corruption and a court saturated with intrigue. As a tribute, the Maharaja Sayajirao University of Baroda has named one of its student hostels as Dadabhai Naoroji Hall.

Tryst With The British: Dadabhai was always fair and just – even when critical. In all his speeches and writings, the root principles of his political philosophy were, India’s wrongs should not blind her to the benefits of British rule. On 31 January, 1897, in a representation made to Welby Commission, Dadabhai Naoroji underlined: “Nobody can more appreciate the benefits of the British connection than I do, but it must be understood that the British Empire in India is built up entirely with the money of India, and, in a great measure, by the blood of India”.

In 1886 he contested in the election for the British Parliament. It was a tough fight and a gallant fight, but as apprehended, it ended in Dadabhai’s defeat. His Conservative opponent had everything on his side – personal influence and wealth, the strong Tory character of the Holborn constituency, the antipathy of Englishmen generally to the Home Rule policy of Gladstone, and above all, a split in the Liberal camp. The result, though not a triumph, inspired hopes of success at a subsequent election.

Facing Failure: As they say, every event has a purpose and every setback its lesson. Often failure is essential for personal expansion. It brings inner growth. Never regret failure. Rather, embrace it as a teacher. There are no mistakes in life, only lessons. From struggle comes strength. No mater what the circumstances in life may be, each individual has to choose the right response to it. When one forms the habit of searching for the positive in every circumstance, one’s life becomes sublime. Failure is not having the courage to try. In Dadabhai’s case, his failure to win only made him better and not bitter.

The average person would have quit at the first failure. That’s why there have been many average men and only one Dadabhai. Always patient and persistent, Dadabhai knew that anything worthwhile never comes easily; if it were easy, anyone could do it. Because he persisted far beyond the point the average person would consider reasonable and rational, he produced results that even the most learned people of the day considered impossible.

Shaking Off The Muck: In the heat and dust of political campaigns a lot of muck was thrown on Dadabhai. However, Dadabhai never stooped to conquer. Besides he was firmly of the belief that if someone speaks ill of you, let your character be such that no one would believe him. In public life, critics usually shovel dirt, all kinds of dirt, on those who take up various causes. The trick to getting out of the deep pit of controversy is to shake it off and take a step up. Each of our troubles is a stepping stone.  We can get out of the deepest pit just by not stopping, never giving up! Shake it off and take a step up.

Dadabhai had the finesse and grace to disagree with his opponents in an agreeable manner. His fellow Member of Parliament and lifelong friend, Samuel Smith once said, “A more single-minded man was never born, and though I did not quite agree with Mr. Naoroji on all points, we learnt to respect each other, each believing that the other was doing his best for the cause.”

Pursuit Of Excellence: Dadabhai’s life is a saga in the pursuit of excellence – constantly going beyond his call of duty, doing more than what others expected of him, striving and maintaining the highest standards day to day, looking after the smallest detail, going the extra mile, doing his best in everything and in ever way and a lifelong race in getting ahead of himself instead of others. It is said, the secret of happiness is simple: find out what you truly love to do and then direct all your energy towards doing it. Dadabhai did just that. His true love was improving the quality of life for all Indians and he directed all his energy in the pursuit of that lofty goal. He was indeed a true follower of Prophet Zarathushtra’s precept, “Happiness to him who makes others happy.”