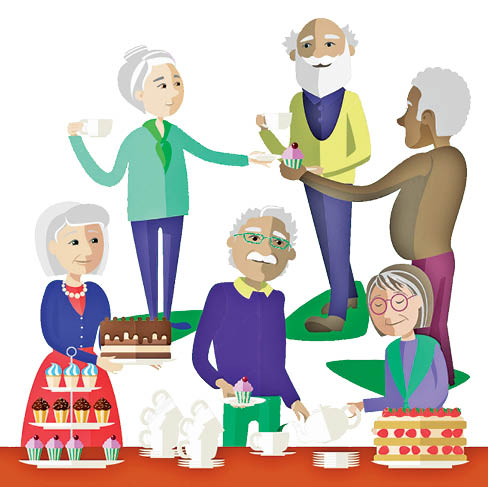 Kanjoos Kekobad and his even more kanjoos wife, mindhi-Mahazarine, gave a tea party at their house. You see, their surname was ‘Marfatia’, but the entire Mandli called them ‘Mafatia’s as they enjoyed everyone’s hospitality with lunches and dinners, but never invited anyone in return to their house.

This time, the Mandli passed a resolution that it was Kanjoos Kekobad’s turn to entertain. Hence, a tea party was organised. His mindhi wife phoned everyone to bring along their own tea-bags, powder-milk and sugar-cubes. Don’t bother about the ‘fudina’, she said. I shall borrow it from my neighbours.

“What about water for the tea,” asked anxious Alamai. “Do we bring that too?”

“No! No! Please don’t embarrass us,” replied Maha-kanjoos Mahzarine. Water we’ll manage from Gustadji’s garden pipe which is always available!

“What about snacks,” asked Meherbai. “Oh! I forgot to tell you,” replied Kekobad, “We are on a strict diet to lose weight and we want to encourage all our friends too, so only healthy snacks like chana-sing and pao-na-pootha-na-toast will be served without butter.” Luckily, Meherbai had tipped off everyone to bring along their own snacks like ham sandwiches, mutton samosas, cheese patties, chicken lollipops, etc. Meherbai also promised to get a huge, delicious cake from Avan Tengra’s ‘Sprinkles’.

At last, the day of the dham-dhoos-keri-choos party arrived and so did the guests. Khadri Farida of Rustom Baug, with all her 200 kgs. sat on Kekobad’s antique rocking-chair and broke it. The host couple was in tears and everyone pacified them saying, “You get a lot of rocking-chairs at Chor-Bajaar.”

“This was an antique, it belonged to my great grandfather – it can never be replaced! I’m heartbroken – so I’ll end my diet and do some ‘comfort-eating’ with all the snacks you have brought,” and he ate up four chicken lollipops!!

Mahazarin: I support my husband through thick and thin, so I’ll also eat for comfort. Mahra thi enu dukh jovaatu nathi, so please pass me some sandwiches.

The host and the hostess demolished quite a few snacks and mindhi Mahazarin put away the leftovers saying, “Kaalnu bapor-raat nu bhonu thai jasey.”

Daji Bhejano Paji: Yes! My wife fell down while taking a walk on Marine Drive and broke her hip! Say hip-hip-hurray! Now she is too weak to fight with me all day long!

Meherwanji: Not that sort of ‘Breaking’ news – kai navi junni?

Aspi Aspro: A fatakri bomb-shell has come to stay opposite our house. This morning, she stood at her window in a sexy nightie and waved out to me – Lamba-lamba haath keedha!

All husbands: Pachhi-Pachhi? Any progress?

Aspi Aspro: No progress – only regress! My wife Jeroo Jasoos crept-up and bonked me on the head with the jharoo saying, ‘You moron! She is cleaning her windows – no body is waving out to you’. See, I got a liboo on my head!

Everyone: What happened? What Happened?

Faramji Fuse: Arrey! My bitter-half found a paper in my shirt-pocket with ‘Jenny’ written on it and being a jealous and possessive woman, who doesn’t allow me even to talk to my neighbour’s wife, asked me – who is Jenny? Being char-chopri pass with distinction, I quickly replied – Jenny is the name of the horse on whom I bet Rupees Ten today at the race-course. Being stupid, she believed me though she’s more educated than me. In fact, she is PHD i.e. Passed High School with Difficulty. Then, the next day, after doing all the housework, I was quietly making tea for myself in the kitchen when she took a high jump to hit me on the head with a frying-pan.

Faramji Fuse: Yes! She is a batak – a real batki-bala with pet ma tatya, if ever there was one!

Kanasori Ketayun: But why did she hit you with the frying-pan? Frying-pan ma gobo pari jatey toh?

Framji Fuse: I was too dazed to ask batak anything. I only heard her uttering these six words, ‘Jenny is on the landline phone!’

Panni-ne-pastailo Pesi: Cheer-up, your problem is nothing compared to mine.

Soli Sali Boti: Do tell us! I love tragic love-stories.

P.P. Pesi: Last week, I spent the entire day at my secretary’s house – khai pee ne majha! A romantic day full of hugs, kisses and other lallo-pappo. She fussed over me and made me feel like a King whereas my wife, Piloo, cold and mean, makes me feel like an untouchable Harijan!

Suddenly, it was 8:00 pm, so I quickly got dressed to go to the jail – I mean my home, and requested my fatakri secretary Behroz-Bombshell to take my shoes and rub them on grass and mud in the garden to mislead Piloo.

I reached home to the question: Where have you been all day? (The Nation wants to know!) If you tell the truth, I’ll kiss you! I told the truth, for the first time in my life – I won’t lie to you – I am having an affair with my Bombshell secretary. And, what do you know! She looked at my muddy shoes and bonked me on my head with the rotli-nu-velan, saying, “You lying so-and-so! You’ve been playing golf all day!”

Homla and Homli: Our problems are the worst of all! As you know, we don’t trust Banks after what Vijay Mallya, Nirav Modi and Mehul Choksi did, so we removed all the cash from the bank and hid it under the godras of our huge double-bed at our weekend house in Udvada. Also being clever, like Einstein, we hid all our gold-biscuits in Monaco-biscuit tin and our diamond jewellery in the huge kitchen jars.

Last week, when we were at Udvada, there was an emergency in the family, so we had to rush back to Amchi Mumbai but while closing the house, the front-door master lock broke. So, we just put a dummy-lock with a big notice on the front-door, saying: ‘COVID-19 POSITIVE – DO NOT ENTER.’ After two days, when we returned to our Udvada house, we found a bigger notice on our front-door. It said: ‘SANITATION DONE – HOUSE IS EMPTIED – EVERYTHING IS CLEANED OUT. STAY SAFE BY WASHING HANDS AND WEARING A MASK’!!!

My poor Homla fainted and had to be revived sapat sughari ney – but the robbers had taken away even our sapats, so I had to call Kaikhushru-kutra-no-doctor who revived my Jeebharu Homla! We even reported the matter to the Police and Inspector Eruchshaw Eagle has taken three suspects in custody – Ketayun Kleptomaniac, Chadanbai Chowmaster and Dara Daku.

As everyone was very sad to hear all that, they left the tea-party with a heavy heart and light-stomachs, since the hostess and the host, had eaten the most!