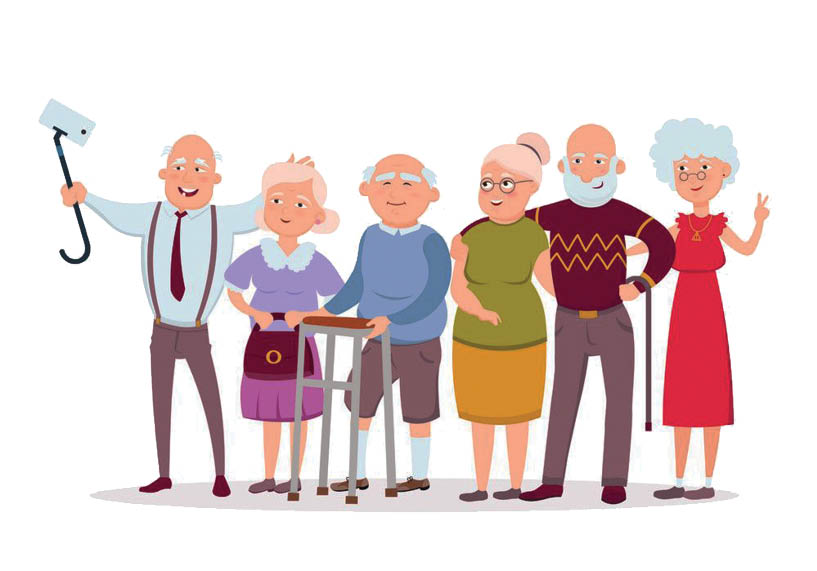 Meherbai’s Mandli met up again for an fun evening on the benches of her Parsi baug. Five members of the Mandli had no place to sit, so they brought their own small stools, folding chairs and saadris from home to avoid aabroo ma gaabroo, prestige ma puncture and ijjat na kankra!

Bomi Bevdo: I went to the Doctor for my regular check-up and he asked if I drank regularly. I told him the truth that I drink occasionally, but the occasions come regularly.

Sherry Show-Off: My husband is a Lion in Lion’s Club – not from a circus or zoo! He is a little backward – bicharo Ph.D chey! Even then, pijan patlo kariney, potanoj kakko kharo karey. He has never been to college.

Sherry Show-Off: Have you never been to school or what? P-H-D means Passed-High-school with Difficulty!

Koomamai: Armin, have you found the right boy for your daughter? She is already 36 and unmarried. People will think she has some defect – kai khaami hosey! What happened to the Rustom Baug boy I showed her?

Armin: Arrey mai-tamuney soo kahoo? The dutta and dutti even went out thrice. Then one day, she came home crying saying, ‘Mom! I can’t marry him! Our ideas are not compatible. Hamara vichar malta nathi. He told me at our last meeting that he doesn’t believe in god, heaven or hell!!’ I tried to console her by saying, ‘Dikra, forget God and Heaven. Just marry him and he will soon start believing in Hell.’

Just then, Meherbai’s obnoxious niece, Farida of Rustom Baug, walked in like a man-mountain – all 200 kilos of her!

Kanasori Kety: Oh my God! Farida! You have put on so much weight, you look like Veer Bhimsen! Too many burgers with your burger gobbling family or what?

Farida: Actually, I had Covid-19 and the doctor said I should go on a sea (see) food diet, so I ate everything I could see!! My husband, my Het-No-Katko and Sagan-No-Gathyo daily brought two dozen mava cakes exclusively for me and indulged me!

Soon, Farida’s henpecked hubby, Hormusji walked in , looking thinner than ever – not that he was ever fat.

Hormusji: Ovaryu, mahra parthi! I was just looking after my Farida Fuggo (balloon) and doing housework since there’s no ganga for months now.

Generous Jeroo offered her chair to Farida who sat on it with a thud. The chair broke into two and Farida fell on the ground on all fours-looking like an elephant. Everyone helped her up asking, ‘No bones broken? Thank God!’

Besharam Beroze: Farida’s bones can never be broken – she breaks her husband’s bones when in a foul mood and her lover, Soli Sales-Tax takes the poor hubby to a Bhim (Bone-Setter)at Dhobi Talao.

Hormusji: Arrey bawa – shukrana Khodaiji na – there’s  no other man in our marriage since March. No Pati, Patni aur Who – only Pati, Patni and peace of mind. You see, the building society where Soli the swine stays, has forbidden anyone from going out. It’s heaven without that gherbhaoo rascal. Farida and I even went to Inox to see Dabangg now that the theatres have re-opened.

Hormusji: Na Re Bapa- all the time, Salman Khan was playing with his belt- Dheelo Hosey! So, he must have held it to prevent his pant from slipping!

Themi: It was the signature dance-step of the title-song.

Fekology Master Farokh: Even I can do this Dabangg dance-step! In fact, I am auditioning for the next sequel of Dabangg.

Alamai Eienstein: Give us free passes for your film.

Manchi Madari: Call me for the shooting.

Freny Fatakri: Call me for the Premier.

Meherbai: Chup! Everyone keep quiet! Ekdum chup! There’s going to be no Dabangg with Farokh. You guys know how he does fekum-fek. He is a well-known fekologist – not an actor!

On this note, the mandli dispersed with Namastey instead if the usual kisi-koti – You know why!!