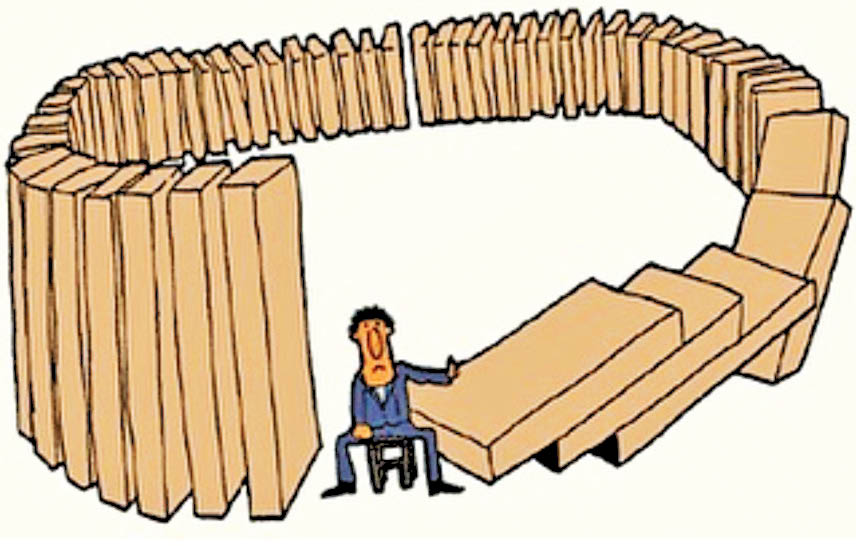 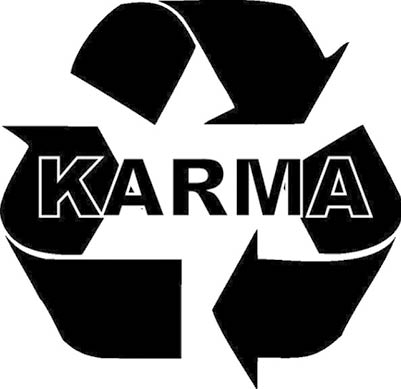 There is no supernatural or external being who arbitrarily administers or controls karmic rewards or punishments. We unconsciously produce their seeds ourselves and when the favourable hour arrives, these germinate and yield their own fruit.

It is not that some mysterious, super-physical angel, ‘deva’, or God intervenes personally and manipulates karma, akin to a puppet performer pulling the strings of his suspended figures. Karma is part of the equilibrium of the universe, bringing a come-back, recording a pressure, allowing each reaction to come about by its own momentum.

So – the million-dollar question – How Does Karma Work? Karma traces complicated effects back to complicated causes. If, in the end, and sometimes well before, karma catches up with you, it is not all painful; the term need not fill you with foreboding… because all the good that you have thought and done brings a good comeback too!

No human existence is without its troubles at some period or without its frictions at another. The first arises out of the element of destiny, which surrounds human freedom; and the second out of the element of egoism, which surrounds human relations. Through its ignorance of karmic operations and effects, the ego provokes many of its own oppositions and much of its own troubles.

Although karma is clinched by what a person does, it is, in fact, built up also by what one long thinks and strongly feels, or mentally focuses upon. When at length you will be called to account by karma, you will be judged not by the certificates of character which others bestow upon you, whether good or bad, but by the motives felt in your heart, the attitudes held in your mind, and the deeds done by your hands.

The law of compensation does not measure its rewards and penalties according to the little human minds -events and environments are attracted to you partly based on your individual karma, partly according to what you need and seek (evolution) and partly as per the society, race, or nation of which you are a member of, as to what it does, needs and seeks – better known as – ‘Collective Karma’.

There is a spiritual penalty to pay for intellectual misbehaviour and moral misconduct, whether there is a worldly penalty or not. For one, there is the failure to know the truth; for the other, there’s failure to find happiness. Karma expresses itself through events which may seem to be accidental, but they are so only on the surface.

Each of us sings a note out into the universe, and the universe answers us in the same key. Karma gives you what you have largely made yourself – it does not give you what you prefer, but it is possible at times, that these two coincide. If you are partially the author of your own troubles, you are also drawing to yourself by mental power, of your good fortune.

If your destiny – the fragment of fate apportioned to you – desires you to achieve a certain task, a particular mission, then however much you may dally in secluded retreat, it will provide you with an inner compulsion that, at the appointed hour, will drag you from retirement into the public arena again. Even if the task has been distant from your desire and concealed from your conscious mind during previous years, you will still have to obey this unexpected inner force, this overwhelming bidding which is but the voice of destiny making it heard in this way. Yes, paradoxically, one carries one’s fate within one’s self! Karma needs to send no attorney to plead  its cause!

Forces out of your own re-incarnatory past come up and push you towards certain decisions, actions and attitudes. This leads us to question whether there is eternal recurrence… The Russian writer, Outspensky’s ‘Theory of Eternal Recurrence’, is both – true and false. We repeat ourselves and our circumstances but always on a different level. It is a spiral, not a circle. An event or a period of life corresponds to a previous one, but is not identical to it. The future is analogous with the past, but does not duplicate it. The spiral does not bring you back identically to the same self or the same work – it brings you to what corresponds to it on a different level.

Our outward miseries are symbols and symptoms of our inner failures. For remember, every self-created suffering and every self-accepted evil is an avoidable one. It may not depend entirely upon yourself how far events can hurt you, but to a great extent, it depends largely upon yourself.

If you had the strength to crush your egoism by a single blow, and the insight to penetrate the screen of a long series of causes and effects, you would discover that your external troubles manifest from faults and weaknesses of your internal character. Every time you manifest the lower attributes of your internal character, you invite their reflection in external events. Your anger, envy and resentment will, if strong enough and sustained, be followed eventually by troubles, enmities, frictions, losses and disappointments.

There are no lucky house numbers nor unlucky ones. If you had a series of misfortunes in a certain house, it is not the fault of the number but the fault of your karma. Your evil karma fell due during that period and would have ripened into sorrowful experiences, even if you had occupied a totally different house with a different number! Now karma arises ultimately out of character for the better and thus ultimately changes your karma to some extent. Then move back into the same house which once brought you sorrow. You will find that this time it will not do so. It’s so-called unlucky number will not harm you anymore!

All the karmic tendencies are not present in consciousness at the same time – some have yet to pass from the potential to the kinetic condition. People should be warned from childhood that the ‘cause and effect rule’ in the moral realm is no less effective than in the ‘scientific realm’. They should be made to feel responsible for setting causes into action that invite suffering or attract trouble or lead to frustrations.

There is an inescapable balance between our principle thoughts and deeds and our principle life experiences -our wrongdoing produces sorrows; our good action produces a rebound of good fortune – causation is the top of the wheel whose bottom is consequence! This is just as true collectively as individually. When, for instance, a nation comes to believe that the conception of right is a false one, it marks itself down for destruction. We have seen this in our time in the case of the German nation. The moral law is not a figment of human imagination – it is a divinely established reality.

The moral fallacy which leads people to think that they can build their own happiness out of the misery of other people can be shattered only by the knowledge of the truth of karma.