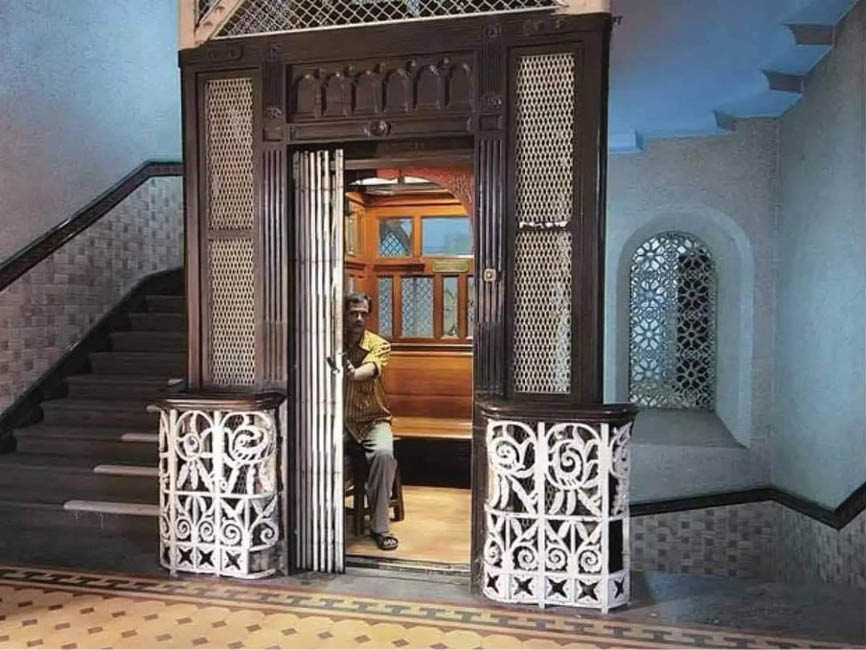 Located at D N Road, Fort in South Bombay, the ‘Navsari Building’ was once where the offices of Tata Sons were. It has been bought over from the Tatas in 1928 by the Kotak family, post which, it was named after Tata’s native place – Navsari.

The Navsari Building houses one of the oldest lifts in the city today. The wood panelled elevator is operated manually using a crankshaft and is hydraulically operated.

This wooden cage elevator reminds one of the Colonial time, with teak wood seats, the Stigler logo is still intact, which confirms its roots.

The Navsari building is one of the few buildings in the city which plans on preserving this heritage which harks back to an era that Mumbai has long forgotten. Imported from London, these masterpieces carved in iron and wood are a courteous facet of the architecture of these buildings. Unlike the functional lifts of today, the lift at Navsari Building and a few such others, were elegantly built – well laid out lift cabins in wood, with ornate work and seats on the sides

The oldest functioning manual elevator in the city and perhaps the country, it has been of service to a number of celebrities during its time and has fortunately, been well maintained. Governed by counterweight mechanism and operated by a hand lever, this unique elevator consists of a square section wooden frame with extended legs for stability. At the base of the frame is a hydraulic cylinder and piston, set vertically.

The original motor was operated on Direct Current to facilitate better traction. The power was supplied by BEST for the trams and buildings on Hornsby Road and the supply was DC, hence a lot of care needed to be taken to ensure safety of operations and also for its maintenance.

Though some modifications have been made over the years and some parts have been changed, the original lift car imported from Milan still remains. The lift, presently accommodates only four passengers and it makes more than 50 rounds a day. The lift operator works the elevator, has now been there for 17 years – and has expertly mastered the skill of manually and precisely stopping the lift car at the exact floor level.

Heirlooms such as these are still remnants of a different era and if maintained well, would continue to last for decades.