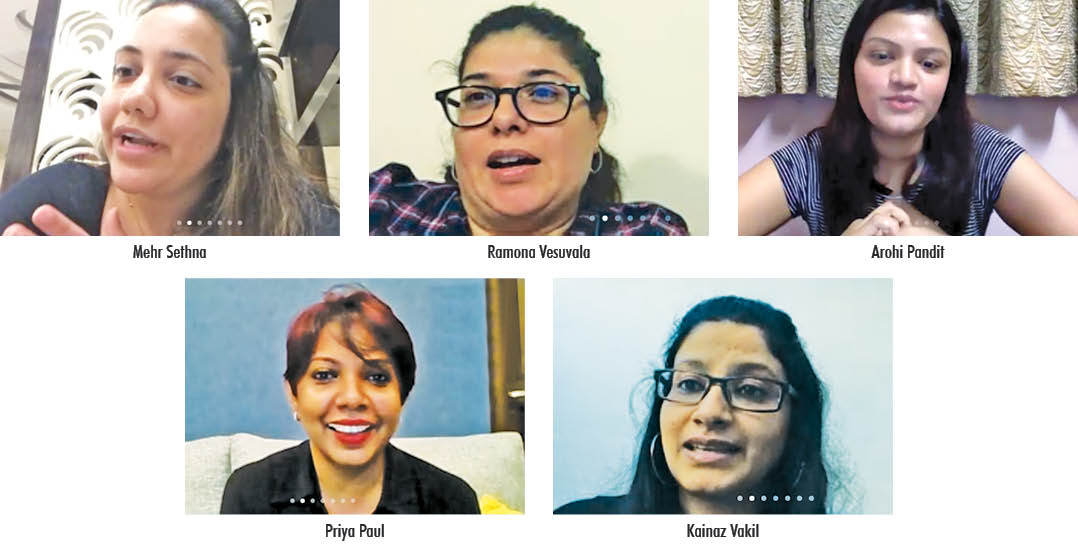 On 9th January, 2021, the Women’s Entrepreneur Wing (WE) of WZCC’s (World Zarathushti Chamber of Commerce) Mumbai, Bangalore and Toronto Chapters, presented an excellent and truly inspirational webinar –  ‘Flying High – Journey beyond the Clouds’  – celebrating some of the nation’s leading women pilots and highlighting their inspirational achievements and journeys.

The webinar commenced with Behroze Daruwalla- (Global Chair for the Ladies Wing of WZCC) welcoming all and sharing the genesis of the WE, saying, “Having recognized the challenges and constraints, faced by women in the current competitive environment, WE was launched to empower women entrepreneurs, professionals and housemakers to capitalize on their inherent capacity, capabilities and abilities, so as to realize their true potential and fulfill their aspirations, especially economically.”

The idea of an All-Women Pilots Webinar came to Behroze, when during the lockdown at the Guwahati airport, she saw a young boy exclaim with disdain, ‘Oh Lord, we have a female pilot!’, when he saw the lady crew and pilot walk past. Though most laughed out, some remained skeptical of a women pilot. This incident planted the idea of holding an all-women pilot’s webinar to do away with the ignorance and myths surrounding such sexist outlooks, and share how these brilliant women go through the veil of the clouds to achieve their goals!

Having earned her wings from The Bombay Flying Club, Arohi was selected by the Navy-Blue Foundation for their Women Empowered Expedition, with a record-making all women crew, navigating the world in a light Sport Aircraft, called Mahi, in September 2018. Arohi is the proud holder of more World Records including being the first woman in the world to fly across the Atlantic Ocean from Scotland to Canada (May 2019); as also the first woman ever to fly over the treacherous Greenland icecaps in a light sports aircraft. Her journey across Canada, into Alaska, battling strong winds in 22 flights, over 9 Canadian provinces made for another world record! “Her flight in ‘Mahi’, across the mighty Pacific Ocean, non-stop from Alaska to East Russia, set yet another world record, very unlikely to be broken for a long time,” concluded Dil.

Taking the lead, Arohi Pandit shared a brief insight into her childhood and her exciting journey as a commercial and light sport aircraft pilot with the attendees. A very passionate child obsessed with animals, the colour blue and airplanes, Arohi was inspired to become a pilot when she saw a female pilot for the first time while waiting to board a flight with her father. She started her flight training at the age of 17, post school and by 21, she was a full-fledged, proud commercial pilot. Flying for 6 years now, speed thrills her and she loves handling takeoffs and landings. Speaking about the experience of flying an aircraft, Arohi said, “It’s just you – the sky above and one’s flight skills, to keep you from falling to the ground. While flying, I understood why the earth is called a blue marble!”

She spoke of flying through challenging weather conditions, the importance of good team-work, “It’s nice to have the ‘solo pilot’ tag, but that’s possible only because of the people who believed in me that I would be able to get that far and all those who helped me on this journey.” She shared a fascinating presentation depicting her journey in pictures.

Next, the other remarkable panelists were introduced – Captain Priya Paul, who currently flies commercial airlines, has the distinction of belonging to the very first batch of women pilots of the Indian Air Force (IAF). Flying with an international airline, Captain Kainaz Vakil comes from a family employed in the airlines sector – she breathes and lives the pilot life and lingo! Captain Ramona Vesuvala earlier flew in the private sector and is now a commercial carrier. Hailing from a family of accountants, First Officer Mehr Sethna started out following in their footsteps, but switched mid-way to pursue her passion for flying and now works with a domestic carrier.

Conducting the interview segment, Behroze asked the ‘high-flying’ panelists what made them choose this career and the challenges they had to overcome. Captain Priya, who grew up in Kerala, shared how her father had chanced upon an advertisement where the IAF was looking to induct eight women from India, for its very first women’s batch and asked her to apply. She was selected and, “Before I knew it, I was in the air force academy. After serving the IAF for ten years, I took a break when I had my children. I later joined a commercial airline and have been flying for the last seven years.”

Captain Ramona, who worked with Taj Air for seventeen years, added, “I wanted to be a pilot since a very young age. It’s much more than wearing a uniform and pushing a few buttons and getting form Mumbai to London! I’ve been flying for 23 years now, and I’m still learning! I’ve been flying for a commercial airline the past four years and enjoying it.”

Captain Kainaz shared, “Liking aviation came naturally to me. After school, I decided I wanted to get into aviation and become a pilot. My parents were supportive and do not look at any profession based on gender. I went to Texas for my initial flying, and returned to join an international carrier in India, where I currently fly in the Gulf and Far East sectors. I’ve had my share of ups and downs, like anyone else, but believe in yourself and just keep working hard.”

Speaking about her switch from commerce to aviation, First Officer Mehr Sethna said, “I always wanted to become a pilot since I was in school. Though I opted for Commerce stream, deep down I wanted a career in aviation, but starting at 24 years felt a little late. Eventually I decided to just go for it! Studying Science was an altogether new challenge but once I took off, there was no looking back!”

Speaking about challenges they faced and lessons learnt, Capt. Priya said that the aircraft does not care for the pilot’s gender – the gentler you handle the machine, the better it flies. She said how grit and determination makes it all possible. Capt. Ramona shared how once she’d stumbled upon her own biodata, where the word ‘female’ was highlighted, as was her age, and how next to it, someone had written, ‘are we brave enough?’ The redeeming reply – ‘yes, we are and we should give her a chance’ – renewed her motivation. Capt Kainaz shared how all professions throw up challenges but one needs to hold on to the positives as these empower you realise your dreams. She hoped that someday they would be referred to as ‘pilots’, sans the tag, ‘female’ coming in. First Officer, Mehr concluded saying it was inspiring seeing women do all things alongside the men.

The vibrant panelists spoke about various rules, regulations, protocols and qualifications they had to adhere to on their journey to becoming pilots, and the indispensability of maintaining good mental and physical health. Their advice to the Gen-next wanting to become pilots was synonymous – to pursue your dreams and how being self-motivated in your career becomes your driving force; that it’s not just about money and glamour as pilots have to constantly learn on their job, as every flight is different. It’s about focus, hard work and sacrifice in your personal life. They emphasized the need to first complete graduation.

Post the Question-and-Answer session with the audience, Villie Daruvala (Chair – Mumbai Chapter Chair) summed up the webinar while Shernaz (Secretary – Bangalore Chapter) gave the vote of thanks, expressing gratitude to all the panelists, attendees, the fabulous WZCC teams and all the helpers for setting up this excellent webinar, as also Global President, Edul Daver, for all his constant encouragement and support.